OUT OF the long-unused concrete terrace under the iconic Slovak Radio pyramid, Bratislava’s first rooftop edible garden, Pod Pyramídou, is sprouting, nourished by the very communities it will serve as a multi-functional meeting place. 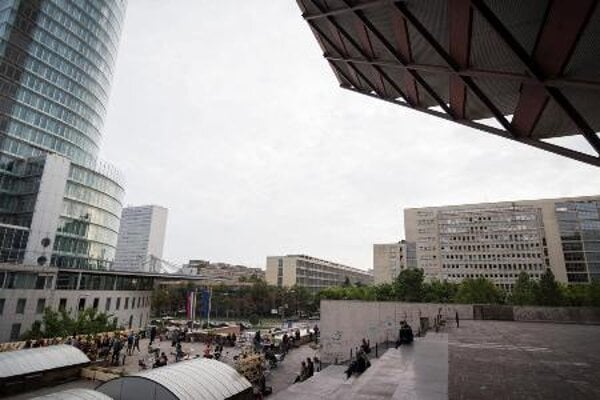 OUT OF the long-unused concrete terrace under the iconic Slovak Radio pyramid, Bratislava’s first rooftop edible garden, Pod Pyramídou, is sprouting, nourished by the very communities it will serve as a multi-functional meeting place.

“There was one moment of harmony when we realised as we were building the garden that it [brings] people of very different backgrounds together,” says Martin Kuštek, one of the initiators of the Na Streche project, which aims to create community spaces across Bratislava.

Na Streche’s vision of creating a rooftop garden containing edible plants and based on participatory design planning – which involves collecting input from the neighbouring community as to the look of the garden – has existed since the very beginning, explains Boglárka Ivanegová, another of the project’s initiators.

“We didn’t want to impose an idea on a neighbourhood, but we saw that there was definitely a need, or some inspiration, from other people to [build this type of garden] as well,” Ivanegová said.

Along with a space reserved for community cultural events like outdoor concerts and film screenings, the garden contains approximately 70 planters that people can adopt and maintain. Strategically scattered across the bare concrete terrace, the handmade wooden planters and the vegetation they contain add a living, breathing element to the once-abandoned space.

The Na Streche initiative finds its roots in the “Pioneers of Unused Urban Spaces” conference, held in Bratislava back in June 2013. There, explains Kuštek, the focus was on community gardens as a source of food security.

“But it’s so much more than that,” he continues. “Once the garden is in place, it becomes a meeting place.”

There are numerous groups which the initiative, in tandem with Slovak Radio, is working to engage. Kuštek cites elderly and foreign residents of Bratislava’s neighbourhoods as tending to be isolated from, and thus marginalised by, the surrounding community.

“The biggest challenge we are facing is turning people that have grown disinterested in civil dialogue into getting back into it again,” Kuštek told The Slovak Spectator, adding that this especially includes young people, who are turning away from public affairs in droves: “What we are hoping is to engage young people to take part in the garden and learn the traditions of their ancestors because most Slovaks have agrarian roots.”

Kuštek explains that the building phase of the project has been made possible not only by grants from Tatra Banka, The Davis Peace Project, the Intenda Foundation, and Johnson Controls, but also by volunteer contributions.

“If we counted the value of the man hours that were put into the project, that would far exceed the material cost,” Kuštek says.

As for the ongoing operation of the garden, Kuštek explains that the goal is for it to be self sustaining, funded by community contributions and proceeds from a café that would be unique to the terrace space.

One volunteer is Peter Král, a recent university graduate who first heard about the project through community NGO groups he follows on social media.

“It was only ordinary stuff: sawing wood, moving bags of soil and planting plants,” he says, “but it was necessary work, and I knew that every hand was needed.” Král sees the Pod Pyramídou garden as potentially serving the wider community as “a nice green chill-out zone or as a cultural centre”.

At the moment, the garden contains a selection of herbs and fruit-bearing trees, Ivanegová told The Slovak Spectator.

In the planters under the pyramid there is mint, sage, savoury, rosemary and lavender, in addition to chillies and strawberries.

“We are trying to plant as many edible, or useful, plants as we can,” she says.

The seedling of a walnut tree was also donated by a community member.

“The fact that that space [under the Slovak Radio pyramid] was unused for more than 30 years, people never saw what was under the building. When people see that the little gate is open, they are naturally inspired to go up and see what’s there." Visitors to the budding garden have been contributing their feedback and encouragement to the Na Streche project, something Ivanegová and her colleagues view as essential to its goal of sowing community engagement. "Once people kind of appropriate the place in their own gentle way, then I think our mission is going to be complete.”