BRATISLAVA is one of the places (there are only a few of them in Slovakia as of now) where festivals of drums and percussions take place. After the Drummers’ Gatherings / Bubenícke slety, originally Czech events took place a few times in the Slovak capital; but there still remains a gap in this musical genre. 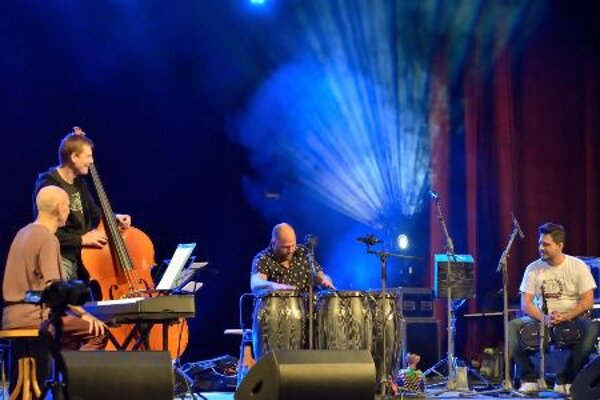 BRATISLAVA is one of the places (there are only a few of them in Slovakia as of now) where festivals of drums and percussions take place. After the Drummers’ Gatherings / Bubenícke slety, originally Czech events took place a few times in the Slovak capital; but there still remains a gap in this musical genre.

In 2011, the first edition of the percussion festival World of Drums took place as a two-day celebration of various genres that involve drums and percussion instruments, from Celtic, through Middle-Eastern and African, to jazz and Slovak/central European folklore.

Last year, the event moved from Petržalka to the Ružinov House of Culture and changed the date to mid-October. The Friday and Saturday programmes included foreign stars and Slovak musicians and proved to be so successful that the organisers (Jarka Vlčková and her Shiraz agency, percussionist Eddy Portella, the Amity civic association and others) were pushed by enthused people to reinvite Dutch-Caribbean percussion teacher Martin Verdonk (who last year arranged a true “drum clinic” onstage with Slovak players from the audiences) and also to organise a festival sooner than every two years.

Thus, on October 11, there were free workshops and drum sessions for fans, families with children and also for amateur drummers, while in the evening there was a concert composed of several gigs. Abáda Capoeira, the Slovak association uniting fans of this Brazilian specialty, combining drumming, singing, martial art and dance, opened the evening with their exotic show. The next to come was a completely different cup of tea, the Musica Medica duo that offers (through guitar, gongs, ethnic instruments and aliquot singing) a voyage through ethnic traditions, meditative music and inspiring tones.

“We met [with Boris Čellár] through his partner, somehow started making music together – and magic happened,” Rami Shaafi of Musica Medica described the beginnings. “He came to our ‘Sound Journey’, really enjoyed the music and we started to play together. It is so effortless… and thus, we wanted to share the results with people. We improvise, Boris just needs to know the key I play. Nothing is fixed in our minds, there is no conductor, and the tune is different each time. This is rare among musicians. And each time, it gets better and better.”

“His music is deep and it touched me – I have always wanted to make such music,” Čellár said on his part. “After my usual genre, jazz which is rich in tones, sophisticated harmonies and poly-rhythms, I appreciated the challenge to make music how I feel it, intuitively and simply.” He added that in their music, the audience and their reactions, perception and feelings are the third part that is involved in the musical result.

The breaks were not long, but still they offered true-to-style entertainment: Drumstas performed a more up-to-date version of percussion music, while the Tambores orchestra from Nitra played more classical Brazilian rhythms.

Then came two bands that included a fusion of Slovak and foreign cultures: Thierry & Friends who play African-French-Slovak reggae to lyrics in all possible languages, including the native African Lingala (in Ružinov, they sang in Slovak). Slovaks from La3no Cubano merge Latino style with local folklore and loosey-goosey texts.

The highlight of the evening, and the whole festival, was the performance of Gabriel Jonáš, Juraj Kalász and Eddy Portella who played excellent jazz and who were joined in the end by Verdonk. Martin Verdonk then invited his wife, Anouk, to give a performance and they ended the whole Saturday concert before a packed hall. Later, there was an after-party in the Batelier venue downtown.

On October 12, Verdonk gave two percussion workshops – one for the interested public and a Master class for professionals.

The World of Drums will still have an aftermath: on November 5, top world percussionist Zakir Hussein will give a concert in the Slovak Radio concert hall, with his Masters of Percussion (Rakesh Chaurasia – bansuri flute; Sabir – sarangi; Abbos Kosimov – doyra; Deepak Bhatt – dhol; Ningonbam Joy Singh – dancing drummer of Manipur) who will offer a voyage comprising the traditional music of India.