JUST DAYS after the Penta investment group bought 50 percent of the shares in the major publishing house, Petit Press (which partially owns The Slovak Spectator) through an intermediary, information has surfaced that another big investment group, J&T, is shopping on the media market too. 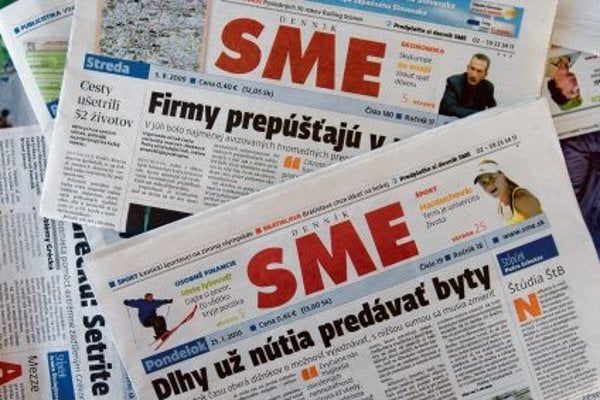 JUST DAYS after the Penta investment group bought 50 percent of the shares in the major publishing house, Petit Press (which partially owns The Slovak Spectator) through an intermediary, information has surfaced that another big investment group, J&T, is shopping on the media market too.

The internet portal Stratégie of the Hospodárske Noviny daily, itself owned by a subsidiary of Agrofert, a group of the Slovak-born Czech Finance Minister and billionaire Andrej Babiš, broke the news on October 20 that J&T or some of its partners were going to buy Ringier Axel Springer (RAS) Slovakia publishing house, Slovakia’s biggest publisher, and a division of the massive German and Swiss firm. Among their stable of properties is the country’s biggest tabloid daily, Nový Čas.
Both sides, however, denied the information, calling it a mere rumour.

“The Swiss-German owner of the Slovak media house RAS is not leading any talks regarding the sale of their Slovak activities,” spokeswoman Ivana Špotáková told the Omediach.com portal.

RAS’ net profit last year was at €4.3 million, according to Hospodárske Noviny. The rumours about the sale are reinforced by the fact that Patrik Tkáč of J&T together with Czech businessman Daniel Křetínský purchased the Czech branch of RAS, now branded Czech News Center. They also reportedly considered buying RAS Slovakia at that time as well.

In early October, Peter Mertus, the long-term CEO of RAS Slovakia, announced he was officially quitting his post as of December. Some sources report Mertus is going to head the holding company that Penta is establishing to manage its media portfolio, which now includes the publishing house of the Trend economic weekly and the 7 Plus publishing house, whose major products are the tabloid daily Plus Jeden Deň and weekly Plus 7 Dní. If approved by regulatory authorities, Penta will also own 50 percent in Petit Press. That purchase spurred protests and resignations at the daily Sme, which many consider to be Slovakia’s most important newspaper.

Unlike Penta, who only entered the media market recently, J&T has been present before, mainly as the owner of the TV JOJ channel. That would pose a problem if J&T purchased a publishing house, because Slovak laws prohibit such cross-ownership on the media market.

After Penta announced it was buying shares in Petit Press, media and market watchers pointed at the Týždeň weekly as the last island of independent journalism.

That image, however, suffered a blow during an October 16 televised debate show Lampa, hosted by Týždeň’s editor-in-chief Štefan Hríb, where the guests, including Petit Press CEO Alexej Fulmek, discussed the arrival of Penta to the media market. During the debate, a tweet appeared on Penta’s official Twitter account saying that Penta and one of its partners, Jaroslav Haščák, “have been co-financing Týždeň for years”.

Hríb was criticised prior to and during the debate for not inviting representatives of Penta to participate.

Penta’s spokesman Martin Danko confirmed that Penta and Haščák have been funding Týždeň for about four years now, because they consider it a high-quality medium. The funding amounted to at least €250,000 since 2009, first through the Penta Foundation and later as private support from Haščák.

“Part of Haščák’s private money has been used in the past year to purchase Týždeň’s circulation amounting to 1,000 pieces, which were then distributed to students of secondary schools for free,” Danko told the Omediach.com.

Hríb, in his reaction to Penta’s coming out concerning Týždeň, admitted they received the money, but kept stressing that Penta has never owned any shares in W Press, the publishing house of the weekly, and never will.

“Týždeň does not consider financial groups the evil incarnate, but it is a fact that it has remained the only broadsheet printed media out of the reach of financial groups,” Hríb wrote in his reaction to the tweet. He also stressed that Penta Foundation supported projects of respectable NGOs like People in Peril, the Conservative Institute, or UNICEF.

Meanwhile, a group of renegades of Sme who announced their departure after Penta purchased the shares in Petit Press, did not waste time, and within a week managed to publish the first details of their new project. It is to be called Projekt N and it could be launched as early as November.

Sme’s editor-in-chief Matúš Kostolný and his four deputies, Tomáš Bella, Konštantín Čikovský, Lukáš Fila, and Juraj Javorský, left the daily and said they wanted to continue their work on an independent internet portal, with the intent to make it a printed newspaper even though “we see the future definitely on the web”, Fila told The Slovak Spectator.

“Projekt N should bring the best-quality journalism to the Slovak market, and we’ve got all the prerequisites for that,” Fila said.

The launch of the portal will be gradual, according to Fila. In November the first texts should appear online and the site should be fully operational in early 2015. The founders of the new project have an ambition to launch a printed version of the paper in the first quarter of 2015.

“It is all changing rather dynamically, however, so these deadlines should be considered very orientational,” Fila said.

Along with the leading editors, over 60 staffers of Sme signed the letter saying they would resign if Penta bought their publishing house. Some of them have already filed their notices, but Fulmek said he was hoping they would withdraw them if the owner of the other half of the publishing house’s shares, PSIS owned by Peter Vajda, manages to push Penta into a minority position in the ownership structure.

Even though it is expected some of the ex-Sme staffers will appear among the editorial staff of Projekt N, the founders refused to name those who are going to join them, with Fila calling the issue “premature”.