KOŠICE – Moldava nad Bodvou grabbed international headlines last year as the scene of alleged police violence targeting the Roma minority. In June 2013, an operation code named “Repressive-Search Action 100” saw 63 police officers raid the Budulovská Roma settlement on the outskirts of town. They were purportedly seeking seven men for whom they had arrest warrants. They found none of those men, but violence ensued and 15 other Roma were taken to the police station, and several were injured. No Roma were ever charged with a crime, and the incident drew criticism from the likes of the UN High Commissioner for Human Rights. 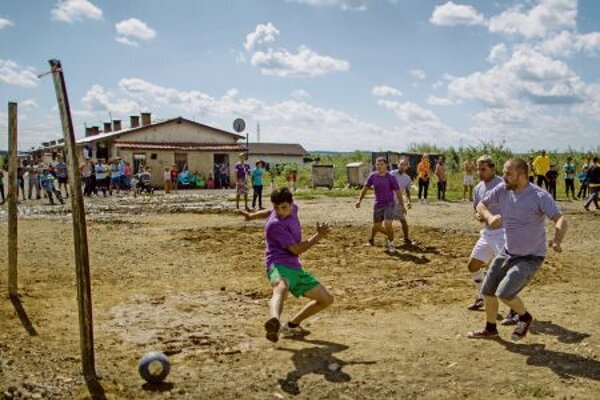 Except for the concert, there were several alternative events held in Budulovská, including a football match. (Source: SME)
Font size:A-|A+0

István Zachariaš is the mayor of Moldava nad Bodvou and has been for 24 years, making him the only person to lead the town since the fall of communism. In August, Zachariaš cancelled a planned concert that was meant to bridge the divide between the Roma settlement and rest of the town. The event was organised by the same people who run the much larger Pohoda festival each summer, and was sponsored by, among others, the US Embassy and was to be held under the auspices of President Andrej Kiska. Zachariaš sat down with The Slovak Spectator to explain that decision, and Roma relations more generally, in his office at the Košice regional headquarters, where he also works.

The Slovak Spectator (TSS): You have been mayor for 24 years, but are not running for re-election in November: why stop now?
István Zachariaš (IZ): I am also a vice chairman for Košice Region and it is hard to do both. Here in Košice I work part time, in Moldava I work full time. So I made a decision to work full time in Košice and run for city council, but not mayor, in Moldava. I believe my experience is still of use.

TSS: Unfortunately, Moldava is most known for recent negative incidents affecting the Roma minority. Most recently you decided to cancel a concert in the nearby Roma settlement at the last minute. First you agreed to the event then you changed your mind. Why?
IZ: I liked the idea of connecting the majority population with the Roma population. We have done many projects in Moldava to improve the living situation for Roma. The idea to invite people from the city to see conditions the Roma live in is a good one. That is why I agreed to it in principle. I did not agree, however, with conditions under which this concert was organised – concrete conditions like the concert would take place within the settlement, which according to police is not safe. Also, we were expecting more Roma from surrounding areas to come and there are often clashes among these various settlements. It is potentially a very unsafe environment. It is also impossible for police, ambulances or firefighters to get into the area where the concert would have been held. It was a closed not opened area. Roma settlements have many children and there was danger of people being stepped on and hurt.

TSS: A big part of the logic you have for cancelling the concert is that the Roma settlement lacked infrastructure like roads that could guarantee access to emergency vehicles and the safety of visitors, but the reason there is no road, for example, is that the town hasn’t built one. You are the mayor and it seems the town’s own failings are the very reasons you cite for cancelling the concert, no?
IZ: This is a question of historical development. Currently, with the use of the money from EU funds we are working on infrastructure: roads, the sewer system, lights. It is an issue that is continually developing. We can say the same thing about surrounding cities and districts, they also do not have infrastructure. It is unfortunately true that our budgets do not allow us to solve infrastructure questions.

TSS: The EU money you refer to is especially for Roma or isolated minorities, isn’t it? In other words, you had to use it for the Roma settlement or you would not receive it, correct?
IZ: Yes, it was a local strategy with a complex approach where we filed four projects. We unfortunately did not get the project that was supposed to solve unemployment. There is a road that leads to a Roma settlement in Moldava. It is not the best road, but it is there. The problem was with the amount of visitors and groups that do not like each other. The concert would have been doable if it was only for people of one settlement.

TSS: I was in the settlement today and saw the construction. Are you saying that in say one year when it is built, it would be okay to have the concert there?
IZ: It depends on circumstances. I am not an expert. I would call on experts and ask their opinion.

TSS: There are tensions between the Roma community and other Moldava residents though, aren’t there?
IZ: They are less and less. This is also because of our projects, because we are solving their living situation.

TSS: But the big problems are largely going unaddressed, aren’t they? Unemployment is close to 100 percent in Budulovská.
IZ: Unemployment is high among the Roma, but it’s not 100 percent. I want to mention the idea of Roma Civic Watch that came from people of the Moldava settlements. It is a very effective way to integrate people into civil society. Those involved learn the basic laws and rules of the city and learn to use them and serve as middlemen between majority and minority populations. They increase trust. There have been numerous election seasons where we have asked Roma citizens to be part of the city office. This also increases trust.

TSS: You mention elections and it is a common problem in Slovakia for candidates to pay Roma for votes. There has been investigation into this in Moldava, hasn’t there? Including in your most recent re-election?
IZ: The issue of purchased Roma votes is a common problem. I have proposed to initiate a change in the law so that unused voting tickets cannot be taken out of the voting rooms. The buying of votes is now against the law. It has not always been that way. My counterpart in the last election, who lost by 500 votes, filed a lawsuit against me with the Constitutional Court. It took a long time and I won. All the information for this is available on my website.

TSS: But you have never engaged in buying Roma votes?
IZ: I do not know anything about it. In general, I know this is a problem.

TSS: This police incident in June of last year is now being investigated by prosecutors. The ombudswoman and international human rights groups have been critical of both the incident itself, as well as the internal investigation that followed. Are you concerned about the possibility that police were overly violent? Do you believe they acted properly?
IZ: I was in Brussels when it happened. It was my Roma colleague who called. I can’t judge. I was visiting with the ombudswoman in Bratislava. I trust that the police have documents that prove it was adequate. I am not in a position to judge.