THE ROBERT Fico cabinet is meeting another promise from its €250 million social-economic package, preparing to compensate the nation for heavy consolidation measures. From November 17 on, rail tickets will be free for children, students and pensioners. While the opposition calls it a populist measure prepared by the ruling party prior to the local elections, railway experts see it as an unsystematic step toward distorting the public transportation market. 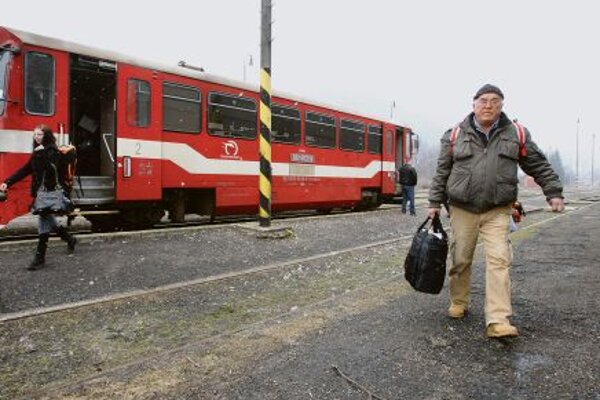 THE ROBERT Fico cabinet is meeting another promise from its €250 million social-economic package, preparing to compensate the nation for heavy consolidation measures. From November 17 on, rail tickets will be free for children, students and pensioners. While the opposition calls it a populist measure prepared by the ruling party prior to the local elections, railway experts see it as an unsystematic step toward distorting the public transportation market.

“We can take such steps only because we have successfully managed to consolidate public finances,” Prime Minister Robert Fico said, as cited by the SITA newswire. “We are managing to save not only in terms of government spending, but we also are managing to raise funds in particular by effective VAT collection, and also other measures.”

Based on the proposal elaborated by Transport Minister Ján Počiatek and approved by the cabinet on October 22, children under the age of 15, pupils and full-time students under the age of 26, persons over 62 years and all recipients of pensions under the Act on Social Insurance in Slovakia will be eligible for free travel using the national railway passenger transport.

According to Počiatek, this measure is first and foremost aimed at taking away the financial burden associated with transport costs for families and students who study at university, while the cabinet also thinks that the measure will help pensioners. This way the cabinet also wants to make railway transport – which is considered to be more environmentally friendly than bus transport – more popular in Slovakia.

It is estimated that as many as 2.5 million people in Slovakia (approximately half of the country’s population) will be eligible for free rail transport, while currently it is about 900,000, according to the Pravda daily. Currently, children up to six years and seniors older than 70 years can travel for free on trains.

The specified groups of people will be able to travel by train for free in 2nd class carriages. These are trains that the Ministry of Transport orders from transport operators under contracts for services in the public interest. Such contracts include the state passenger railway company Železničná Spoločnosť Slovensko (ZSSK) and private passenger railway company RegioJet for the Bratislava-Komárno route.

The measure does not apply to IC and other trains which carriers operate at their own expense without state support. The cost of providing free travel on trains will be at least €13 million and the Transport Ministry has this amount in the draft budget for next year. Of this sum, €12 million should go to ZSSK and €1 million to RegioJet.

Part of the measure will also be an increase in the frequency of rail transport, as the cabinet expects that this measure will increase the interest of people in railway transport.

As of December 14, there will be 103 more trains, while long-distance railway transport will be intensified between Bratislava and Košice, as well as between Bratislava and Zvolen. The number of express trains between regional centres will also increase. The intensity of suburban transport will increase too. The December increase in the number of trains will be the most significant within the last 10 years, SITA wrote.

The cabinet also plans to increase discounts for commuting workers beginning next year from 30 to 50 percent.

The opposition has responded to the measure with criticism, calling it a populist step taken just prior to the municipal elections scheduled for November 15. The Christian Democratic Movement (KDH) accuses Fico’s cabinet of dividing people into two categories and the Freedom and Solidarity (SaS) party perceives it as punishing those who work or do business.

According to Miloš Moravčík of KDH, Fico’s cabinet divides people into a category which has access to railway transport and those who do not, as railway transport is not equally dense in all parts of the country. Moreover, free trains would mean fewer travellers in regional buses and as a consequence higher bus fares.

“The departure of a portion of travellers from buses into trains will deepen losses of bus carriers and these will be forced to propose an increase in fares,” Moravčík said, as cited by SITA, labelling the measure to be a populist measure with the aim of increasing the popularity of PM Fico.

According to Moravčík, the free trains measure will harm those in places without railway access. These are already at a disadvantage and are forced into travelling by buses.

“Those who do not have trains can be also socially weaker and will be forced to contribute to fares of socially stronger,” said Moravčík, as cited by SITA. “This has nothing in common with a social policy. Rather, it is making political capital out of it.”

Viktor Stromček, the state secretary of the Transport Ministry, in this respect said during a discussion on Slovak Television that 83 percent of the population has access to a railway station within 30 minutes and that the railway network in Slovakia is denser than in some neighbouring countries, and thus the usage of railway transport in Slovakia is simple and accessible.

Richard Sulík, the head of SaS said that free trains for students and pensioners is a slap in the face of the middle class and all people who work, do business, and create value in Slovakia.

“Robert Fico is systemically squeezing business people and the middle class with higher income as well as payroll taxes in order to shamelessly bribe, using public money, non-productive groups of citizens, from whom he expects their voices in exchange,” said Sulík, as cited by the TASR newswire.

According to SaS, the timing of this benefit has the only goal and the support of Smer candidates during the upcoming municipal elections.

“Already in the past the prime minister several times and without any shame announced to citizens that candidates of Smer in regions will be put at an advantage by the government,” said Sulík. “Today he is adding to this direct bribes for seniors and students.”

Pavel Kravec, the former general director of ZSSK does not consider the decision about free trains to be a systemic step in breaking any rules and mechanisms of the railway market, or public transport as a whole. Moreover, it complicates introduction of the integrated transport system in regions.

“When free travelling is ordered by the government for all carriers, this is the principle of equality of opportunities,” Kravec told SITA.

The cabinet also argues that bus transport is in private hands in most cases, and that it secures free transport only for state companies. But the Association of Bus Transport, perceives this as discrimination.

“85 percent of the people in regions use bus transportation and these will not have access to discounts,” Peter Sádovský, vice-president of the Association of Bus Transport told the Slovak Radio. “Regional governments will not have money for such discounts.”

Kravec expects that private transporters active in Slovakia, RegioJet and Leo Express operating rail routes from the Czech Republic to Bratislava and Košice, will turn to the European Commission to decide whether this measure does not mean an unpermitted assistance to ZSSK.

Radim Jančura, the owner of Student Agency Holding, who also owns RegioJet, has labelled the cabinet’s decision to be a right of the state, but conducting this right must not have a character of discrimination of competition.

“We have delivered to the Transport Ministry two independent legal analyses supporting our stance,” Jančura told SITA. “This question pertains especially to competition; it is not a question for the European Commission but for the Antitrust Office.”