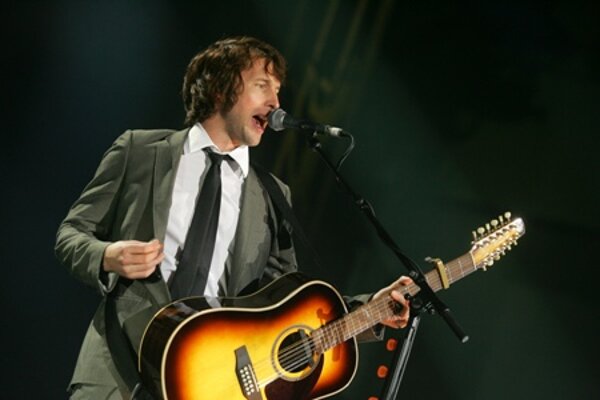 Bratislava
CONCERT: JAMES Blunt, former British soldier-turned-singer and hitmaker, comes to Bratislava to give a concert presenting his latest album, Moon Landing, within an eponymous tour. He returns to the Slovak capital after six years, to offer both older hits like You’re Beautiful, Goodbye My Lover and new songs like Bonfire Heart and Heart to Heart as well. The concert at Aegon Arena (NTC) in Príkopova 4 takes place on October 28 at 19:00; tickets cost €39 and can be purchased through www.eventim.sk.

Bratislava
LIVE MUSIC: Elán – Best Of Vol 2 – Legendary Slovak band Elán will give a concert in Bratislava, offering the chance to download their songs free, make a CD and let it be sung at their concert. Those who buy tickets can, moreover, get a free CD booklet. Elán will also have a guest, the wind section with which the band toured in 1979. The band is made up with Jožo Ráž (vocals, bass), Jano Baláž (vocals, guitar), Vašo Patejdl (keyboard, vocals) – old member who are also composers; and the newcomers – Peter Farmbauer (guitar, vocals), Ľubo Horňák (keyboard), Henry Tóth (guitar) and Boris Brna (drums).
Satrts: Oct 28, 20:00; Slovnaft Arena (Ondrej Nepela Ice Stadium), Odbojárov 9. Admission: €24-€44. Tel: 02/5293- 3321; www.ticketportal.sk.

Bratislava
EXHIBITION: Alex Mlynárčik – The exhibition of visionary artist (of the “Slovak Line of New Realism”) is the first large one in Slovakia since 1964, offering an overview of his most important artworks and projects.
Open: Tue-Sun 11:00-18:00 until Nov 9; Mirbach Palace of the Bratislava City Gallery, Františkánske Square 11. Admission: €2-€4. Tel: 02/5443- 1556(-8); www.gmb.sk.

Bojnice
HALLOWEEN:HALLOWEEN, or rather Bojnický Svetlonos – The “Celebration of Light” at the Bojnice Castle will also bring Halloween (originally a Celtic holiday) to Slovakia. Decorations, themed tours and a lot of light will take place between October 30 and November 1; at 19:00. Tickets cost €5-€8 and more information can be found at www.bojnicecastle.sk.

Žilina
LIVE MUSIC: Karel Gott – The most popular Czech (and Czechoslovak, for that matter) singer of all times, Karel Gott, celebrates his 75th birthday with a tour that leads him also to the Slovak capital and the city of Žilina, offering his long-time hits and also songs from his last album.
Starts: Oct 27, 19:00; Doxxbet Arena, Športová 5. Admission: €20-€45. Tel: 02/5293-3321; www.ticketportal.sk.

Banská Štiavnica
EXHIBITION: Karol Baron – šľachtic surrealizmu / Aristok-rat of Surrealism - The exhibition of the Slovak artist, more famous abroad than at home, who had a holiday home in nearby Banská Hodruša, has been so successful that it is now prolonged.
Open: Mon-Fri 9:00-16:00 until Nov 15; Jozef Kollár Art Gallery, Námestie sv. Trojice. Admission: €1-€2. More info: www.muzeumbs.sk.