A match marred by violence

FOOTBALL fans who attended the ŠK Slovan Bratislava and AC Sparta Praha match, not to mention a significant TV audience, witnessed a long-unseen display of football violence when infamous Czech hooligans broke a security fence at the stadium during the October 23 match. 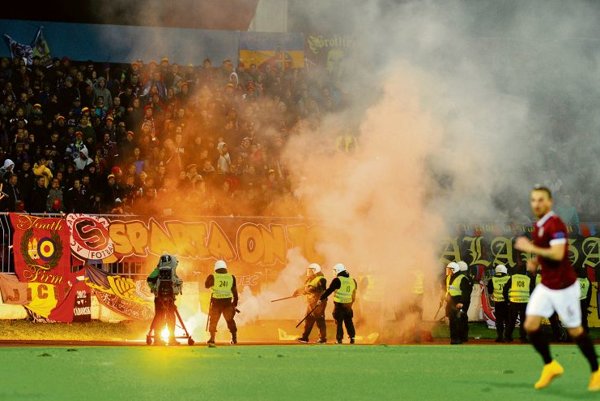 Police had to intervene in the match. (Source: AP/SITA)
Font size:A-|A+0

FOOTBALL fans who attended the ŠK Slovan Bratislava and AC Sparta Praha match, not to mention a significant TV audience, witnessed a long-unseen display of football violence when infamous Czech hooligans broke a security fence at the stadium during the October 23 match.

Sparta won the UEFA Europa League match 3-0 in Bratislava, but not before the end of the first half saw hooligans break through the barrier dividing home and away fans, and started beating Slovan fans. The game had been earlier marked as a security risk with Sparta known for having some of the roughest rowdies in the region. Several minor incidents preceded the match, with some Sparta ultras garnering several misdemeanours and even a felony charge in the centre of Bratislava on the day of the match.

Sparta hooligans have had a reputation since the 1980s, particularly after 1985 when they destroyed train cars and attempted to throw the train conductor out of the train during their ride to Banská Bystrica, the Sme daily wrote. Many of those who got involved in the recent Bratislava incident have been banned from football matches at home, Sme reported.

The incident at the Pasienky Stadium in Bratislava provided some disturbing images during the live broadcast of the match by public-service television. First, several men destroyed the security fence and then used the iron poles from the fence to attack their counterparts. Media reports have pointed out that families with children were present in the area, too, with some reporters trying to protect the children by pulling them up to their seats.

Public-service Radio and Television of Slovakia (RTVS) commentator Ľuboš Hlavena had to flee his booth – which was only a few metres away from the incident. His colleague, former football international Szilárd Németh who watched the events from the field, said “I am glad I am alive”, as quoted by Sme.

The match was interrupted for 40 minutes. Players, coaches, and other staffers were sent to safety within the stadium, while the security company supposed to guard the match field and a special police unit had to be called in.

The medical service reported no injuries and no hospital visits related to the incident. The bad news is that both football clubs may face punishments or fines by the international football authorities, and the host club, Slovan, may even be banned from allowing fans into the stadium for its next match, with the Swiss club Bern.

UEFA refused to comment on the ongoing disciplinary proceedings when addressed by The Slovak Spectator. The association’s press department merely confirmed that disciplinary proceedings have been opened. Slovan Bratislava faces accusations pertaining to crowd disturbances, setting off fireworks, and insufficient organisation, while Sparta Praha will have to respond to accusations of crowd disturbances, and setting off fireworks and missiles.

The UEFA Control, Ethics, and Disciplinary Body was scheduled to deal with both cases on October 30, 2014. The results of the proceeding were not known as The Slovak Spectator went to print.

Slovan: we did what we could

Slovan officials however refute allegations that they were at fault. In its official statement released immediately after the match, the club condemned the incident and claimed they realised the gravity of the case and the need for its proper investigation.

On October 27 the representatives of the club held a press conference during which they rejected the blame that has poured on them from the Slovak public and media, which accused the organisers of mismanagement of the match, saying that they knew the match was considered risky and they had prepared for it accordingly.

“For several weeks we’ve been evaluating the situation and information provided to us by the Police Corps,” Slovan’s security manager Marek Bednárik told the press conference. While the previous match, against Naples, was secured by 180 stewards and 30 volunteers, the match against Sparta employed 230 stewards and 30 volunteers, and the security barriers were raised even higher.

Police: we were on timeMany in the audience as well as the journalists covering the match complained about the fact that the police did not intervene on time and that even after the police forces arrived, their intervention was not appropriate.

Slovan representatives said they called the police immediately after the Sparta fans crossed the security fence.

“At this point it is hard to say whether the police acted on time or not,” Bednárik said.

Some of the Slovan fans who attended the match were quoted by the Slovak media as saying that the police intervention was mismanaged and that the police were trying to discipline the fans who ended up on the football pitch after the turmoil started, instead of focusing on the aggressors.

“The police were in the sector within three minutes after the request came from the organisers,” Police Corps President Tibor Gašpar told a press conference on October 28, as quoted by the TASR newswire.

Gašpar also announced that police were going to launch action against Slovan Bratislava, with the suspicion that the club had violated the law by letting intoxicated persons and persons carrying pyrotechnics into the stadium.

In the aftermath of the incident Sme reported that the stadium where the match took place, Bratislava’s Pasienky, was not originally approved as a proper venue for the match. The only stadium that UEFA deemed fit for hosting such an event is the stadium in Žilina, in northern Slovakia, but Slovan reportedly refused to have the match held there, and after giving assurances that they would make some adjustments to the stadium, UEFA authorised the match in Bratislava.

In its report from October 27, Slovan itself admitted that Pasienky is “hard to guard”.

Slovan representatives have also blamed insufficient laws for the problems with the rowdies. General Director Dušan Tittel suggested at the October 27 press conference that there is a need for a change in the laws.

“Further increase of [the number of] organisers wouldn’t be effective, it’s a change in legislation that is needed,” Tittel said, adding that the hooligans need to be aware of the punishments they are facing for provoking such incidents.