Welfare for Roma is not a fiscal issue, it's social

NOT even 2.2 percent of total public spending goes to Roma citizens even though they are often depicted as those who abuse the social welfare system in Slovakia. This is the finding from an analysis conducted by the Institute for Economic and Social Studies (INESS) released on October 22. 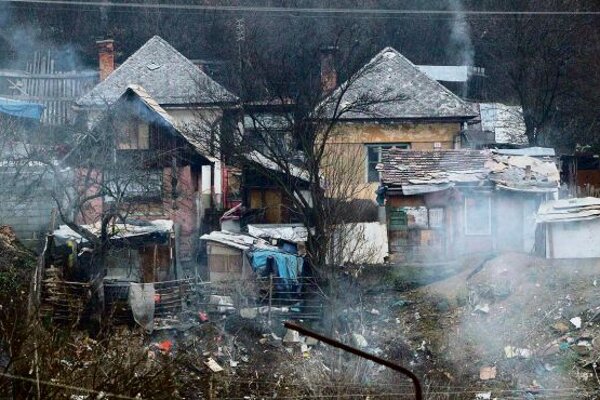 The think-tank looked into numbers provided by the Central Office of Labour, Social Affairs and Family (ÚPSVaR), social insurer Sociálna Poisťovňa and the Atlas of Roma Communities and concluded that the costs of welfare paid in districts with a two-thirds Roma population makes up 2.2 percent of public spending, which is €578 million.

“Even though Roma are proportionally highr recipients of public transfers these don’t amount to such a proportion of public finances as is discussed in inns or at the family table,” INESS analyst Ján Dinga, one of the study’s authors, told The Slovak Spectator.

The analysis is part of campaign recently launched by INESS that also includes a webpage focusing on economic myths about Roma and a TV spot explaining which groups in society receive transfers from taxpayers.

Several NGOs together with the Government Proxy for Roma Communities, Peter Pollák, appraised INESS’s effort to bust some fiscal myths about Roma.

“Roma are depicted as parasites or people who obtain their daily bread in a dishonest way even in Slovak fairytales,” Jarmila Lajčáková from the Centre for Research of Ethnicity and Culture (CVEK) told The Slovak Spectator. “Accessible analyses show that such characteristics are seen by the majority [population] as incontestable fact.”

Material need benefits are not so costly

According to the study, €578 million was sent to districts where Roma residents constitute two-thirds of the population and this is similar to the amount of money lost each year due to ineffective public competitions or other inappropriate public transfers, referencing data from INESS’s website plytvanie.sk that monitors public procurements.

About €270 million – or just 1 percent – of all public expenditures are paid in the form of Slovakia’s benefit in material need (BMN) to all eligible recipients, meaning as well to those who are not Roma.

“We are maintaining an inaccurate opinion that we are really a social state and that poor people cost us a lot of money,” Laco Oravec of the Milan Šimečka Foundation (NMŠ) told The Slovak Spectator, “but we spend relatively low [sums] in the social area.”

BMN is available to households with a monthly income lower than the government-determined subsistence level, which has been €198.09 per month for a single person since July 2013 and did not change in July 2014, according to the Labour Ministry. The amount of BMN is proportional to the number of household members. The BMN for a single person is €60.50 per month; for a couple with one to four children it is €157.60 per month; and €212.30 per month for a couple with more than four children.

“By the way, the amount of benefits in material need is set too low and it is not possible to live on that amount,” Lajčáková commented, “therefore people encumber themselves with debt and the vicious circle of poverty and exclusion is strengthened.”

The analysis cites statistics from ÚPSVaR showing that €270.7 million in the form of BNM went to 183,341 recipients, and together with other dependent people who are mostly household and family members, there were a total of 357,765 people receiving BNM or about 6.6 percent of Slovakia’s population in 2012.

Pollák pointed out that one of the myths is that an unemployed Roma living on state welfare benefits receive higher amounts than their counterparts in the majority population.

“It is not the truth,” Pollák told The Slovak Spectator. “The basic condition of eligibility for this assistance is the state of need of the recipients, not their ethnicity.”

Busting the myth about large families

One of the stereotypes related to Roma is that they have many children, which draws a huge amount of money from state coffers for child allowances and BMN. For that reason INESS focused its research on families with more than three children.

INESS found that these families are receiving barely €27 million in benefits in material need per year, which is the same sum the government has allocated for construction of the future National Football Stadium in Bratislava. These families also received around €30 million per year in the form of child allowances.

“Similarly to BMN it is just a drop in the sea of public finances since just in 2014 the state was missing 67-times more than this sum to reach a balanced budget,” the study states.

In 2012 the basic child allowance was €22.54 per month along with a one-off state contribution after the birth of a child of €151.37. In contrast to BMN, the child allowances are a universally available form of state support usually provided without consideration of the economic situation of the household.

Another type of social benefit is a benefit for parents of children after maternity leave which is €194.7 per month and is universally granted until a child reaches age three. In 2012 around 142,000 people, or 2.63 percent of the Slovak population, received this benefit from the state with a total sum of €334.4 million.

Based on the study’s data, INESS analysts estimate that families with more than three children received just €15 million per year in parental benefits while the expected amount of the y-o-y increase in pensions paid by Sociálna Poisťovňa is 12 times higher than that amount.

INESS also wrote that it estimates that the child allowances go to more than 160,000 Roma children with the sum totalling €44 million per year. Around 24,000 people who receive the parental benefit are Roma and the total sum that went to them in this form was €57 million in 2012. In comparison, the study noted that pensioners receive Christmas bonuses that total €65 million annually.

The importance of the issue

The inspiration for the whole INESS campaign came from a students’ essay competition in which many claimed that welfare spending on Roma is Slovakia’s biggest fiscal problem. Dinga said it could be said that students consulted with parents and teachers in writing their essays.

The campaign will continue in form of lectures, educational activities and workshops in cooperation with other organisations focused on dealing with issues of Roma citizens.

“Our aim is to shed more light on these issues from the perspective of public finances,” Dinga said. “We think that more facts and fewer emotions will be good for [public] discussion.”

The system of social allowances in Slovakia is complicated and changes relatively often. People do not have a reason to check the facts carefully and they receive information too often from various hoaxes published on internet according to Lajčáková.

She said that myths resulting from this lack of knowledge slow the progress of integrating marginalised Roma citizens into society. She noted that many Roma cannot sufficiently engage in self-help because persons from the majority population are usually the employers who decide whether or not to hire Roma and whether funds that come from the EU are actually used on real projects to improve the lives of Roma or are abused.

“Even though many [people] think that it is enough when Roma ‘start from themselves’ it is clear that it is not enough,” Lajčáková said. “It also seems that politicians, considering the public mood, don’t have the courage to speak about Roma as people who should be given a chance and not just put sanctions on them for their poverty that they can’t really influence.”