IF SOMETHING is already tried and well established, there must be a very strong reason to change it. For Bratislava Jazz Days (BJD), a festival that has traditionally been a three-day October event, the reason comes only once every five years when an extra day is added to present the creme de la creme of Slovak jazz. 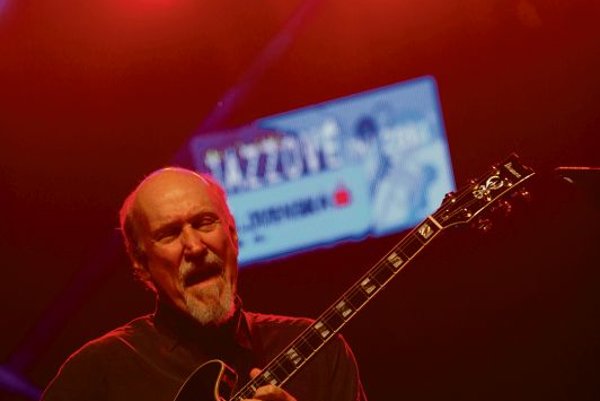 IF SOMETHING is already tried and well established, there must be a very strong reason to change it. For Bratislava Jazz Days (BJD), a festival that has traditionally been a three-day October event, the reason comes only once every five years when an extra day is added to present the creme de la creme of Slovak jazz.

The reason was even stronger in 2014 because the legendary festival, dubbed “džezáky” by Slovaks, celebrated its 40th anniversary. October 23 was the day when many local musicians and bands got their “10 minutes of glory” to show their mastery of the genre at the Old Market Hall in downtown Bratislava.

During the next three days the festival returned to its usual venue, to the Petržalka bank of the Danube River, albeit in a slightly modified part of the Incheba Expo Arena.

The October 24 concert kicked off with Maringotka, the winner of last year’s Stage of Young Talents competition sponsored by the SPP Foundation, with its own version of Gypsy jazz. The four young musicians created an atmosphere of sitting by a fire under a starry sky with the caravan behind your back. The repertoire of the band is comprised of songs by Django Reinhardt performed between the 1930s and the 1950s.

The audience also welcomed the Hungarian band Djabe which returned to the BJD stage after 12 years.

“The Bratislava show was very memorable for us because this was our first ever gig outside of Hungary,” Attila Égerházi, guitar player and percussionist, told The Slovak Spectator, adding that since then they have played in 42 countries around the world.

Though each band normally plays at BJD only once, Djabe returned this year on the 40th anniversary of the festival. This time they brought along a special guest: Icelandic drummer and percussionist Gulli Briem, one of the founding members of the Mezzoforte band. The performance was real pleasure for the senses as not only did the two drummers (Djabe’s Szilárd Banai and Briem) play in perfect synergy, but Briem played various percussions that enriched the performance.

Toward the end of the group’s performance, when almost every member of the band was playing the angklung, a bamboo musical instrument native to Sundanese people of West Java, they were joined by Peter Lipa, the festival’s long-time organiser.

Composer and singer Hugh Masekela, who has been on the scene for more than 50 years and recorded 40 solo albums, brought South African rhythms with him and became the first performer who made the audience stand from their seats and dance. He vividly communicated with the audience – trying to convince them he was really a native of Bratislava.

The climax of the event came in the form of Robert Cray, a blues singer and guitar player from the US who has already won five Grammy awards. Not only was the beginning interesting, when Cray started playing with the lights off and then gradually coming on stage, but also the rest of the performance when he exchanged his guitar after every song.

The third day of BJD brought five concerts, including several very playful and live performances, as well as perhaps the biggest star of the whole event in the personage of John Scofield.

The first highlight of October 25 evening was when an American jazz composer and vibraphonist, Joe Locke, came to the stage along with singer Kenny Washington. He is widely considered to be one of the most skilful masters of the vibraphone and is well known for his live and communicative performances.

“When I play music it is the place for me to be joyful,” Locke told The Slovak Spectator. “The music is for the audience but the physical feeling is for me as it comes from inside – and I need it.”

Then the audience welcomed one of the biggest names of the event, Scofield, famous for his improvisational guitar skills, who plays in a trio with percussionist Bill Stewart and bassist Steve Swallow. Often referred to as “Sco” he possesses stylistic diversity generally falling somewhere between post-bop, funk-edged jazz and R&B.

Scofield returned to Bratislava after first performing at BJD 24 years ago and he highly praised the audience.

“I can’t ask for any better audience this night,” Scofield told The Slovak Spectator. “It affects my improvisations because positive energy makes things better.”

Lillia Expósito, known as Bellita, one of the best known and most respected Cuban jazz pianists, embellished the night with her quartet called Bellita y Jazztumbatá. The quartet featured a special guest Glenda, Bellita’s daughter who lives in Cuba and Slovakia, who made people take the floor and dance to their Afro-Cuban rhythms.

Last, but not least

October 26, the last day of the festival, was opened by the Slovak band Galík-Hodek-Oravec-Ragan Group, who honourably mastered the sometimes unrewarding task of heating up the audience that was only starting to arrive for the evening.

After the performance by another band, the Ed Partyka Jazz Orchestra, the first big star was Mike Stern with his Band. Guitarist Stern had already played in Slovakia several times and in 2007 he gigged at BJD.

Stern said in an interview before the concert that he has been influenced by blues-rocker Eric Jones with whom he just now made an album and the influence could be heard in his selection of songs.

Vic (Victor) Wooten had a hard job capturing the audience after Stern’s performance, but he managed to do so and even gave an encore. He was joined by his brothers Reginal “Reg” Wooten on guitar, Roy “The Future-Man” Wooten on drums and Karlton Taylor on keyboard.

Asked by The Slovak Spectator how he selects the pieces to be played, Vic Wooten answered: “Sometimes I decide last minute based on what the bands before us have played. If they played a lot of straight-forward jazz, I’d stay away from that,” he said. “It could also depend on what we played last time we were here. And sometimes we just want to play what fits the festival.”

Wooten did perform different music than Stern had before him but also did a great show, warming up the audience and improvising with help from saxophonist Franceschini he “borrowed” from Stern.

On the B-stage, the SPP Foundation Talent competition offered infill for the required technical breaks at the main stage, presenting young Slovak talents to the audience who could also cast a vote for their preferred band who will open next year’s festival. That honour was won by the easy-going, Latino-impacted band Groove Hub.

The 2014 Bratislava Jazz Days proved as memorable as ever, being a meeting point for jazz performers (local and international alike, as jazz knows no borders or limits), dedicated jazz fans and for Bratislava bon vivants a “showcase of Slovak jazz”. But most importantly it was a melting pot of various jazz styles, musicians and instruments – to the enormous delight of the audience every day of the festival.