Learning the art and skill of debating 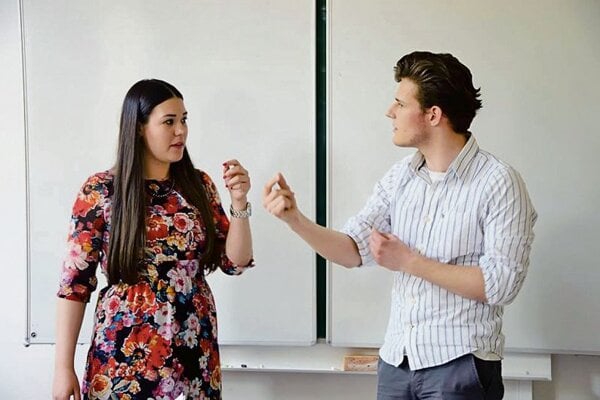 CRITICAL thinking skills are important abilities students can use in their future life, the schools say. One of the ways to learn these skills and make rational arguments is to participate in debates. Several schools across Slovakia have recognised this important need and have started their own debate clubs in cooperation with the Slovak Debate Association (SDA).

“Our education system does not teach us how to think critically and how to work with information we receive,” Hana Skljarszka, a sociology student, who served as Slovakia’s United Nations Youth Delegate in 2013, told The Slovak Spectator in an earlier interview. “We have media distorting information or pushing forward ideas which people automatically accept without evaluation. We live in social bubbles which reproduce some values or ideas and we cannot escape them until someone shows us the way.”

Skljarszka is also one of the arbiters of the SDA, a civic association established in 1999. It is the only group in Slovakia that deals with systematic development of debate activities and debate methodology, according to the SDA website.

Young people are the main target group for the SDA and it teaches them how to think critically, use arguments, communicate effectively, do research and perform well in front of the public. It also cooperates with teachers, other organisations and the general public.

“Debate develops the ability to distinguish between facts and opinions, good and bad argumentation, and quality and inadequate sources of information,” Michal Adam, spokesperson for SDA, told The Slovak Spectator.

According to Adam, debaters have to be sure about the information sources they use, to recognise strong and weak points of their arguments as well as those of their opponent and how to promptly respond.

SDA also organises competitions for debaters that differ for primary, secondary schools and universities. The competitions are decided by arbiters who are trained by the SDA at tournaments and individual courses.

“Arbiters evaluate the debate regardless of their own opinion strictly based on what was said,” Adam explained. “They judge the quality, logic and clarity of arguments, the ability to disprove the opponent’s arguments or the ability to succeed in cross-examination. Presentational skills are the last priority – in debate the content, not the form, is crucial.”

Currently there are about 45 debate clubs active at primary, secondary schools and universities across Slovakia. As schools become interested in debates they establish new clubs every year that are then led by young people, Adam said.

“The whole organisation depends on young people,” Adam continued, adding that many students who attend the SDA programmes then remain active in the organisation as volunteers and they are able to provide various seminars for debate clubs at schools.

A school that cooperates with SDA is Tisovec Lutheran High School that established its collaboration in 1999. Helena Pašiaková, the school’s headmistress, said the idea to hold debates was very interesting to the school.

“We are a bilingual school and our US lectors, who had experience with debates, inspired and led us in the beginning,” Pašiaková told The Slovak Spectator.

She confirmed that many of their graduates have stayed with SDA and help, especially at the workshop week held in June. During this event students learn more about the rules of debate and have a chance to give it a try.

“Students perceive it very positively and learn much,” Pašiaková continued, adding that the event also has a motivational aspect since they seek to find students who will be interested in participating in the debate club.

According to Adam, skills like leading effective dialogue, working in a team and under pressure, or convincingly presenting one’s ideas prepare the debaters for many situations in their future life. Moreover, these skills are often sought after by potential employers. Additionally, debaters are more tolerant and more open in considering minority positions, Adam said.

“In civil life, which often brings disputes, they subsequently can distinguish ideological prejudices and reasonable arguments, prefer facts to feelings, and yield to better arguments or reach compromise,” Adam added.

Pašiaková confirmed that the skills students learn in debate are important for life. First, it can be a motivation for students to succeed in their “fights” with parents and teachers and to be better prepared for their school leaving exams. Later, they understand that they can learn to work with informational materials, improve their communication skills, expand their general knowledge, watch developments in society, the economy and politics and, most of all, use critical thinking, she explained.

“The critical thinking skills they gain and cultivate are a guarantee that they will not be easily misled, an important feature of a free citizen,” Pašiaková concluded.

THE SLOVAK language can be difficult to learn not only by foreigners but also to those who were born and raised in Slovak families. For those who are hearing impaired, communication with other people poses many difficulties. To remove the barriers, hearing people can attend special courses where they not only learn the basics of sign language but also better understand the world of the deaf.
“The beauty and expressive possibilities of sign language are fascinating,” Róbert Šarina, an interpreter of Slovak sign language, said in an interview with the Pontis Foundation.

Šarina was born to a family where his father and brother were deaf so he had to learn the language necessary to communicate with them. He later studied special pedagogy for hearing impairment and the Slovak language and also started to interpret to and from sign language. Šarina now leads several courses where hearing people are learning sign language.

According to Šarina, when people learn the sign language and really get to know it, a new dimension of communication opens in front of them.

“I am personally fascinated by the attitude of the hearing impaired to life,” Šarina said, pointing to the cohesion of their community and their pleasure in their own culture.

Šarina also finds it important for people with hearing to learn sign language.

One such course is offered by the Pontis Foundation that implements it in cooperation with the Telekom Foundation.

“Our joint effort is to change Slovakia into a country that understands the hearing impaired,” Petra Nagyová, PR manager of the Pontis Foundation, told The Slovak Spectator.

The Pontis Foundation and the Telekom Foundation support hearing-impaired individuals who want to start their own business, launched a special programme in which special pedagogues visit families with hearing-impaired children and have even offered free courses where people can learn the basics of sign language.

During their 13 years of cooperation, the foundations have realised what it means not to hear and how it affects the lives of hearing-impaired persons when they go to various authorities or to a doctor and also when they must deal with a lack of information because “Slovak is a foreign language for them and they have problems with reading comprehension”, Tatiana Švrčková, manager of the Telekom Foundation and organiser of programmes for the hearing impaired, told The Slovak Spectator.

At the sign language courses, the participants can also learn more about the culture of the hearing impaired and the problems they face.

“I think that learning foreign languages removes barriers between people,” Šarina told the Pontis Foundation. “It is important [to realise that] that even though it is difficult for a person who can hear to learn sign language, it is much easier than when the hearing impaired try to learn the spoken language.”