PARENTS send them to Europe to save them from a life in poverty, but many times such children end up as modern-day slaves forced to work, beg or prostitute. Slovak authorities have detained more than 770 immigrant children without parents over the past five years. Many of those who were placed in children’s homes run away and are never found, according to a study by the Human Rights League (HRL). 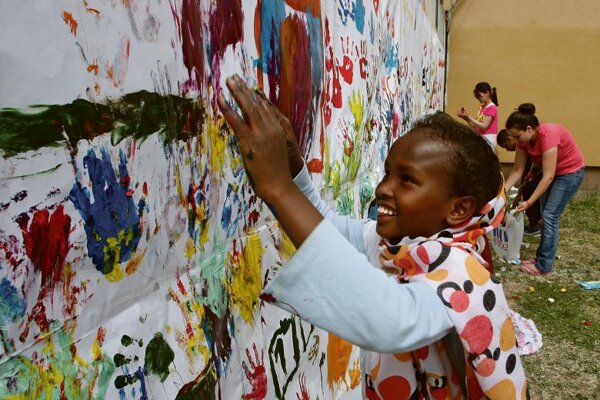 PARENTS send them to Europe to save them from a life in poverty, but many times such children end up as modern-day slaves forced to work, beg or prostitute. Slovak authorities have detained more than 770 immigrant children without parents over the past five years. Many of those who were placed in children’s homes run away and are never found, according to a study by the Human Rights League (HRL).

“If I was detained in Sweden or Switzerland I would not run away,” Iraq immigrant Ali, 24, who twice tried to leave Slovakia, told the TASR newswire. “I didn’t know this country, but I heard from others what Slovakia is about and I didn’t want to be here.”

Most such children arrive to Slovakia via the Ukrainian border, where they are picked up by the foreign police and placed in the Foster Home and Children Centre in the town of Medzilaborce. Before 2014 they went to a foster home in Horné Orechové village. However, 90 percent of the apprehended children go missing, according to HRL.

Children have few options to stabilise their situation: to get permanent residence, they need to stay in the children’s home for three years but most of them come to Slovakia at the age of 16-17; therefore, they can be deported from the country after reaching age 18. Another option is to receive asylum, but just five such children succeeded in doing so between 2010 and mid-2014, according to Katarína Fajnorová, a lawyer with HRL.

“This means that many separated children don’t see any purpose of staying here and developing their lives and future,” Fajnorová told The Slovak Spectator, “which could have an influence on [their decision] to disappear from Slovakia.”

Most of children who come to Foster Home in Medzilaborce are 16-17 years old and do not consider Slovakia their final destination. More than 70 percent of them try to escape and reach wealthier countries where relatives or others of their nationality live, foster home director Vladislav Fejo said in an interview with the Sme daily.

The process of legally moving children to their family living abroad is complicated and some are not patient enough, Fajnorová said, and instead flee.

“We report it to police immediately,” Fejo said, as quoted by Sme. “For the first time they are detained but they try it over and over again.”

Between January and September 2014 police detained 12 illegal immigrants younger than 18 and the foster home in Medzilaborce has reported 13 cases of escape since the beginning of the year. Police succeeded in finding three of those individuals trying to escape, police spokesman Michal Slivka told The Slovak Spectator.

“Most recently, three boys from Vietnam were reported to have tied blankets together and climbed down from a window at night,” Fajnorová told the press.

The lawyer added that before the children go missing, they are often heard talking intensively on mobile phones to strangers, who most probably give them instructions as to how to escape. Strangers pick them up or have a taxi retrieve them.

“We are not aware of their fate, or what has happened to them, and none of our authorities are searching for them,” Fajnorová warned, as quoted by TASR, adding that the children may end up as victims of prostitution, or forced to commit petty crimes, begging, undergo a life of domestic slavery or donate bodily organs.

HRL believes that children who apply for asylum in Slovakia should not be placed in refugee centres, in order to make sure that they are separated from adults, who often drink alcohol, smoke cigarettes and can mediate contacts with traffickers. Slovakia should also begin keeping records of children who go missing and should search for them, as is done for Slovak children.

Slovak courts are obliged by law to place each child without adult care into a children’s home and the same applies to Slovak children. Immigrants younger than 18 would be placed in the foster home in Horné Orechové village, and later in Lastovička foster home in Trenčín. In 2014, the foster home in Medzilaborce took responsibility for those children, according to HRL.

The home in Horné Orechové is placed outside the village and children going to school used the bus to get to the village, but had to go back on foot in the afternoons, according to Alžbeta Fronková, a teacher appearing in an HRL documentary about those children.

“The most important issue was isolation,” she said.

The current children’s home takes care of both foreign and domestic children. Moreover, the home is not isolated and the director, together with social workers, is interested in this issue, Fajnorová said.

Communication is often a problem as the foreign children rarely speak Slovak and very often do not speak English. They need interpreters and there are not enough of them in Medzilaborce.

Slovak schools are not prepared to educate unaccompanied foreign children who do not speak Slovak. Currently, the Slovak Catholic Charity provides the education of Slovak language in the foster home, but HRL claims that such education should be secured by the state, and not be dependent on NGOs or charity. Moreover, education in Slovak for those who apply for asylum and are subsequently placed in a camp for such people is of low quality.

“It is just a very basic level [of Slovak] which is provided in limited extension and for all asylum applicants and many times it is not provided by pedagogues,” Fajnorová said.

The majority of respondents in the HRL survey who were in Horné Orechové said that they did not have the opportunity to choose their fields of study. Children who wanted to become lawyers or doctors were often sent to vocational school, said HRL representatives during a press conference, the Pravda daily reported.

The current situation is hard to evaluate since there is just one foreign child in Medzilaborce on a long-term basis because others disappeared or were moved to a camp for asylum applicants, according to Fajnorová.

“We don’t restrict anyone [on choosing a field of study],” Fejo said, as quoted by Sme. “We present regional offers of study and they choose. If they choose grammar school they enroll there. Of course it depends on their knowledge of the Slovak language and their intelligence.”

Many times, however, even schools’ unwillingness to accept such student due to their low knowledge of Slovak language and missing documents about their previous study complicate the situation, according to Fajnorová.

In late October, Education Ministry representatives met with HRL to discuss their findings and identified several shortcomings in the education system of children immigrants. They agreed that the education of some children is delayed because they are moved to asylum-seeker camps, and that because of moving them between camps, their education in the Slovak language is not systematic and some children decide to leave Slovakia because they do not have the chance to choose their field of study.

The Education Ministry proposed creating a methodology for such children, ministry spokeswoman Beáta Dupaľová Ksenzsighová told The Slovak Spectator, adding that a State School Inspection should monitor their education between 2013 and 2017.

“They [discussion participants] expressed their interest in continuing discussions and seek solutions particularly in adopting preventive measures and improving the way of searching for separated children,” Fajnorová said. “However, it would be premature to draw conclusions.”