WITH nearly 19,000 students learning French in the Slovak school system, the French language is well represented in the country, notes French Ambassador Didier Lopinot who also suggests that some Slovaks are opting to study French in connection with their work, especially with Slovakia’s 2016 European Union presidency approaching, with French still a key working language among EU institutions. 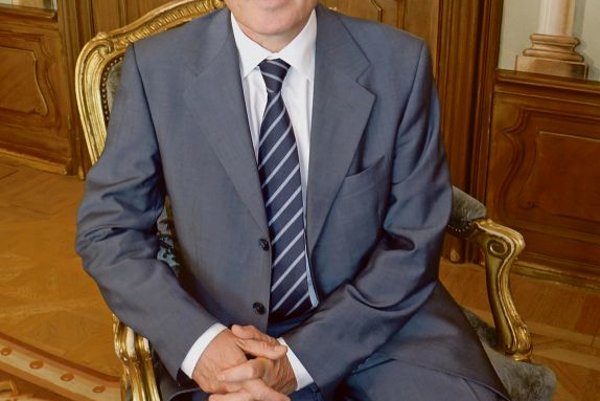 WITH nearly 19,000 students learning French in the Slovak school system, the French language is well represented in the country, notes French Ambassador Didier Lopinot who also suggests that some Slovaks are opting to study French in connection with their work, especially with Slovakia’s 2016 European Union presidency approaching, with French still a key working language among EU institutions.

In an interview with The Slovak Spectator, Lopinot commented on French reforms, nuclear energy, the situation in Ukraine, as well as the objectives of his diplomatic mission.

The Slovak Spectator (TSS): French Prime Minister Manuel Valls has said several times that ambitious reforms are needed to get the country back on its feet. What is the philosophy behind the reforms and what areas are most affected?

Didier Lopinot (DL): The French government reaffirmed its commitment to implement a strategy for restoring stronger growth and creating employment, while improving public accounts in order to regain room for manoeuvre and reduce public debt. This ambitious agenda aims at restoring the competitiveness of our businesses, with an unprecedented support of €40 billion; acting responsibly with regard to our budget expenditures; and carrying out structural reforms. With the Pact for Growth, Competitiveness and Employment, the government has already provided businesses operating in France with the means to reposition themselves on sustainable footing in international markets, by reducing, in particular, labour costs thanks to competitiveness and an employment tax credit of €20 billion per year.

Further reforms announced by the prime minister include the territorial reform, the removal of some obstacles to growth, the reform of some aspects of labour law, as well as simplifying administrative procedures and cutting red tape. The government also is promoting a “Greater Paris” policy with, in particular, €20 billion dedicated to building an automated high-speed metro system spanning 150 kilometres by 2025. But all these efforts must be supplemented by stimulus at the European level – that is why France welcomes the priority given by the new European Commission to investment.

TSS: France, like Slovakia, generates a significant portion of its electricity via nuclear power. However, you now aim to reduce your share of nuclear power to 50 percent. How does your homeland want to achieve this goal? What are France’s most significant energy security challenges?

DL: For France, nuclear energy is and will continue to be a major factor of independence and industrial, economic, diplomatic and military power. France ranks second after the United States with 58 nuclear reactors. With a turnover of €46 billion and 2,500 companies of all sizes, the French nuclear industry possesses a globally acknowledged expertise, which is the fruit of constant commitment and investment for the past 60 years. The French nuclear sector is, at present, the leader in fuel cycles, nuclear power plant construction and maintenance.

At the same time, France is determined to engage in the energy transition, which is the focus of a bill currently being discussed in the French parliament, which is to give France the means to further contribute to tackling climate change, while reinforcing energy independence by diversifying its energy mix. The bill currently discussed proposes ambitious goals: to reduce greenhouse gas emissions by 40 percent between 1990 and 2030 and 75 percent by 2050; to develop renewable energy to the level of 23 percent of the mix by 2020 and 32 percent by 2030, and to diversify electricity production. According to the bill, nuclear energy will have a 50 percent share by 2025 thanks, in particular, to the development of renewable energy. As for renewable energy, France is already the second-largest European producer after Germany, and has assets that will allow the country to become the major producer.

TSS: Earlier this year, in response to the Ukraine crisis and the adoption of EU sanctions against Russia, France halted the delivery of a completed Mistral warship to Russia. Is public opinion in France unified regarding the Russian invasion of Crimea and subsequent tit-for-tat sanctions that the EU and Russia imposed on each other?

DL: The French position is very clear: we cannot accept that a country annexes a part of another country, as was the case with Crimea, or sends troops into another country against its will. The EU enacted sanctions on Russia because this behaviour was not acceptable, and this is fully understood in France. Retaliatory measures by Moscow have a negative impact on some French exports and contracts, as is the case for all EU members. However, financial compensations at the EU level have been made available to guarantee proper burden sharing among affected states. A political solution to this crisis must be found through dialogue. That is why France has taken the initiative of a special dialogue format, the so-called “Normandy” group with Russia, Ukraine, France and Germany meeting whenever is necessary.

President François Hollande and German Chancellor Angela Merkel spoke to presidents Vladimir Putin and Petro Poroshenko in this format on October 30. The four participants welcomed the conclusion of the negotiations on Russian gas supplies to Ukraine, conducted with European Union mediation. The President and Chancellor Merkel emphasised the importance of fully implementing the Minsk Protocol of September 5 and expressed the wish for national dialogue to be restarted between the Ukrainian authorities and the separatists. They called for full observance of the ceasefire. They also emphasised to President Putin the need to ensure effective control of the border between Russia and Ukraine.

TSS: How do you assess the popularity of the French language in Slovakia, as English is the mandatory first foreign language taught at Slovak schools?

DL: With nearly 19,000 students learning French in the Slovak school system, the French language is well represented. The dynamism of French education in Slovak schools and universities is evidenced by the four bilingual sections in Slovak secondary schools while a fifth could be created in Nitra; by the presence of 16 French native teachers, as well as by the 500 teachers who subscribed to the embassy’s pedagogical newsletter.

Adults are also learning French, especially at the French Institute and in both French alliances, in Banská Bystrica and Košice. They decide to do so in connection with work, and in view of the Slovak EU presidency in 2016. French is a working language in EU institutions. Many people also learn French just to discover the country and its culture.

TSS: Slovakia marked the 70th anniversary of the Slovak National Uprising (SNP) earlier this year and French involvement in those 1944 events was one of the biggest outside groups. What significance does this event hold for France?

DL: These historical events still have an important significance for France. In order to revive this memory, the French Embassy, in cooperation with the SNP Museum in Banská Bystrica, the Historical Department of the Slovak Ministry of Defence and the Slovak Military History Institute, organised a “staff ride” or “in situ” conference on October 27 and a day later in Strečno. It is on this site that 200 French soldiers, 56 of whom were killed and 45 injured, fought alongside our Slovak brothers-in-arms from August 30 to September 4, 1944, in order to delay the advance of German troops toward Banská Bystrica during the SNP.

TSS: Despite economic hardship, France, especially Paris, has done well in terms of attracting visitors in recent years. How has France managed to sustain its status as a leading tourism destination?

DL: France has managed to sustain its status as the world’s most visited destination since the 1990s. In 2013, it is estimated that the number of international tourist arrivals grew by 6 percent in France, reaching nearly 85 million visitors. According to forecasts, this upward trend will continue in 2014. Tourism is, thus, a very important part of the French economy, leading to more than 7 percent of GDP and 2 million jobs. Two areas of the tourism market continue to expand rapidly despite bumpy economic conditions: the luxury travel market and so-called Meetings, Incentive, Convention, Events (MICE). Beyond that, of course, tourists can enjoy 33 UNESCO World Heritage Monuments, 40,000 castles, abbeys, manors, churches and 8,000 museums. Of course, for France, gastronomy and oenology are two strengths as well.

All year long, Slovak visitors can discover the rich variety of French regions through their local gastronomy in numerous bistros, cafés and Michelin-starred restaurants. In this regard, I would like to mention a big event, “Gout de France” or “Taste of France”, which takes place on March 19, 2015. On the very same day, a high standard French cuisine menu will be offered by 1,000 restaurants over five continents and in all our embassies.

TSS: Slovakia’s second biggest city, Košice, shared the European Capital of Culture title with Marseille in 2013. Has this project brought France and Slovakia any closer in cultural cooperation?

DL: The Košice-Marseille alliance of European Capitals of Culture allowed us to organise many cultural partnerships, supported in particular by the French Alliance of Košice, with the participation of the French Embassy and the French Institute of Slovakia. “White Night” was an opportunity to present five installations made by French artists; “Use the City” was a great success. The Triennial of Contemporary Art brought together works of the Contemporary Art Fund of Marseille, a conference on urban development entitled “Innovative City” was proposed to an audience of architects and planners, a “2-in-1” concert allowed Slovak musicians and French musicians from Marseille to play together in an orchestra, finally, an exhibition on the “Marseillaise and Symbols of the Republic” was organised at the French Alliance of Košice.

TSS: You arrived in Slovakia last year. What has surprised you in a positive or negative way? Are there any issues you are paying special attention to?

DL: On the occasion of President Hollande’s visit in October 2013, a few weeks after my arrival, I was impressed by the cooperative spirit and efficient collaboration of all the Slovak institutions and authorities concerned, which were decisive in the success of this visit. As for specific fields of interest and priorities of my mission in Slovakia, I will single out economic diplomacy, in particular attracting more small- and medium-sized enterprises to the Slovak market, the promotion of tourism in France, and cooperation in science, technology. We just opened the first FabLab – a digital manufacturing centre – in Slovakia. Also, I should note vocational education.