FRENCH culture has had quite a long tradition in Slovakia, as has the French language and its accompanying lifestyle. But compared to previous years, when most of them were rather concentrated in and around Bratislava, they have been moving more outside the capital recently. 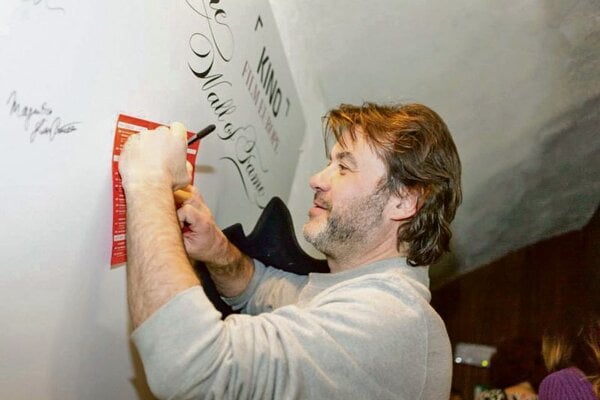 FRENCH culture has had quite a long tradition in Slovakia, as has the French language and its accompanying lifestyle. But compared to previous years, when most of them were rather concentrated in and around Bratislava, they have been moving more outside the capital recently.

One of the possible reasons may be the year 2013 when the eastern Slovak city of Košice and the French port of Marseille shared the title of European Capital of Culture. But also other eastern Slovak towns, as well as the central Slovak metropolis Banská Bystrica and some other municipalities also got their share of French culture.

“Our aim is to widen as much as possible the geographical scope of cultural cooperation between our two countries,” Didier Lopinot, the French Ambassador to Slovakia told The Slovak Spectator. “So far, many activities were concentrated in Bratislava. In 2013, our activities have been rebalanced towards Košice. In 2014, we have endeavoured to associate the regions with Francophone month (French Film Week, song contests, exhibitions, concerts, parties, events, etc.).”

Lopinot added that other cultural activities have also been organised well beyond the capital, such as the “Semaine du gout”. Intending to continue in this direction and with this aim in view, they are relying ever more on the two French Alliances (Banská Bystrica and Košice), but also on the extensive network of French native teachers, who are working throughout the country, he said.

In spring, the Days of French Culture spread from Košice to Prešov and Michalovce, lasting an entire month, and offering in Košice a photo exhibition of Olivier Ciappa in the Vojtech Loeffler Museum, a francophone theatre exhibition dedicated to Albert Camus, a festival of very short films, “Trés Court” and an organ festival of Miroslav Piš playing the works of French composers.

In Prešov, the La Marseillaise exhibition, an audio-book called Chrysoméle – Potato Beetle, club concerts and screenings of French films formed, the Days; while in Michalovce, a performance of an ensemble from Lyon invited children to participate in creating music, while in all of these places, the organising French Alliance / Alliance Française in Slovakia strove to promote the French language and its study as well.

In October, an exhibition called FUJI by a renowned French artist of project mapping, Joanie Lemercier, was opened in the Eastern-Slovak Gallery in Košice and will last until November 18. Also the White Night / Nuit Blanche brought French visual artists to the streets and public spaces of this city, and thus closer to Košice inhabitants and visitors.

“This year, the French Cultural Autumn [in Banská Bystrica and Zvolen] began on October 20 and will continue until November 17,” Lopinot noted. “An exhibition of the famous French photographer Yann Arthus-Bertrand will be presented in the bilingual section of the Štefánik “lycée”, or secondary school, of Banská Bystrica.” He listed also other scheduled events: a concert evening (with “FrancoFun party”), a cultural quiz on November 10 (both in French and Slovak) and a workshop about French cuisine.

In March, the first edition of the Week of French Films, Creme de la Creme, took place in Bratislava, before moving on to other Slovak venues.

“The first edition in 2014 of the French Film Week in Slovakia, Creme de la Creme, was a great success,” Lopinot stated. “Of course, we wish to reiterate this event in 2015. Once again, our aim will be to present as many recent French films as possible, not only in Bratislava, but also in the entire country. Besides, the French Institute will continue to support other film festivals, where French films are scheduled (like the International Film Festival of Bratislava).”

France is also noted for its music and in Slovakia, a variety of it has been offered during the last year. The Bratislava Music Festival (BHS), a well-established festival of classical music in September/ October, included a concert by the Lyon orchestra, and also an innovative organ improvisation concert, in which Slovak organist Monika Melcová commented on the individual gigs – and final joint performance – of French organist and organ teacher Loic Mallié and his Hungarian student László Fassang.

“Promoting music is also part of our cultural priorities, ” Lopinot explained. “This year, the most visible action was our partnership with the BHS Festival in Bratislava for the visit of the Orchestre National de Lyon. We supported several other concerts, like the festival of Baroque music on the occasion of the Rameau year, an organ music festival, Banská Štiavnica music festival, a concert of the pianist Berezovsky for the Slovak National Radio, Music Night and Music Day, and more.”

The celebration of the French National Day / Bastille Day has already become a successful item in the Bratislava summer cultural calendar, taking place around July 14. This year, it coincided with the exhibition in the French Institute, presenting the history of the National Order of Merit (Ordre national du Mérite) which is awarded for the credit and contribution to public administration, and also culture or social life – both to French and foreign individuals.

“The exhibition on the National Order of Merit was presented in the library of the French Institute, in order to explain the history of this order that was created by General de Gaulle 50 years ago and quickly became a veritable institution for the French Republic. It has been well received by the public,” Lopinot said.

There were numerous other jubilees and anniversaries in 2014, such as the Slovak National Uprising in the World War II, or the start of World War I. Many of them are part of the shared French-Slovak history.

“Beyond a 'staff ride' in Strečno, we organised and will continue to organise more activities in order to commemorate the beginning of World War I, the 70th anniversary of the Battle of Normandy and of the Slovak National Uprising,” Lopinot said, adding that the latter two events will take place in the following days. On November 10-19, the French Institute will organise a film fortnight (“Quinzaine du film”) on WWI, with a series of films and documentaries devoted to the Great War.

On the other hand, at the initiative of the French Emba-ssy/French Institute and with the Italian Institute, an international symposium on “Stereotypes and war propagan-da” will take place on November 12 (9.00-16.30) in the Maxi-ma Auditorium of Comenius University.

“I would also like to mention here the Slovak participation in the 70th anniversary of the Normandy landing on June 6, as well as in this year’s Bastille Day, which marked the 100 year anniversary of the first world war with 72 belligerent countries invited to the official parade on the Champs Elysées, including, of course Slovakia,” he summed up.

Among the activities organised in the French Institute in the past year, Lopinot named: 11 exhibitions of paintings, drawings, sculptures, photographs, archival documentaries; one French film per month on average in the framework of a film club; one lecture per month on topics related to exhibitions (or on the occasion of the “open house”); several small concerts, often linked to exhibitions (or during the “open house”), adding that all these activities will be continued or developed in 2015.

“Outside the French Insti- tute’s walls, the events are e-ven more diversified,” he added. “The partnership bet-ween the French Institute and Slovak cultural institutions works very well as a whole. As examples of this fruitful collaboration, we can mention the week of French film, exhibitions in Bratislava and in the regions, the systematic presence of French actors in major festivals, the events organised on the occasion of the commemoration of the two world wars, the creation of the Imro Weiner-Kráľ Prize (to reward an artistic personality who worked on bilateral cultural projects between France and Slovakia), which was awarded for the first time on October 23, 2014, to the glass artist Yan Zoritchak.”

Asked about future plans, he answered: “We are currently working on next year's planning, but in the coming weeks, I can list several events organised or supported by the embassy or French Institute: the “scientific café” on digital manufacturing, electronic music concert (DJ Brodinski), singer Zaz concert, a concert by the Philharmonic cellist Jérôme Pernoo, a play by E-Emmanuel Schmitt... the show will go on in 2015!”