THERE are Nights of Museums, there is a White Night bringing visual arts out into the streets, and there is also Andersen’s Night, when children (and adults) go to libraries to get a taste of how a library may look at night. 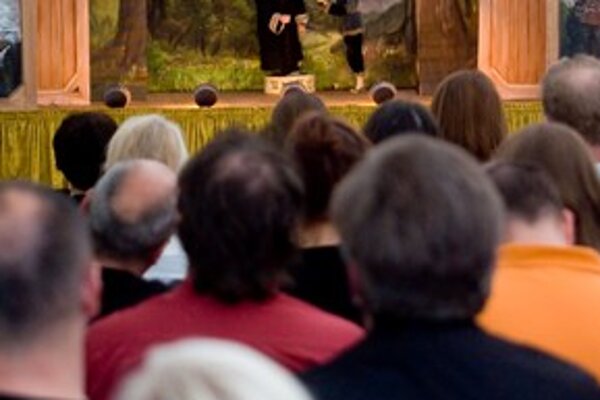 THERE are Nights of Museums, there is a White Night bringing visual arts out into the streets, and there is also Andersen’s Night, when children (and adults) go to libraries to get a taste of how a library may look at night.

People usually go to theatres for evening and night-time performances; thus, theatres who want to organise a Theatre Night must offer something special: since 2008 (2010 in Slovakia) theatres Europe-wide synchronise on the third Saturday in November, to start with a coordinated “joint applause” at 19:00 and then continue with a long programme of performances, debates (with actors and theatre-makers), workshops, photo-sessions with costumed actors, video presentations, glimpses backstage and more.

In the capital, the Slovak National Theatre will open its doors and offer performances of drama and an original merger of visual art and dance by Peruvian artist Luis Casanova Sorolla, as well as “a surprise” in the opera section. The DPOH City Theatre brings a concert by the Porque Tango ensemble, as well as several drama performances.

Several other Bratislava-based theatres will take part, like the Puppet Theatre Bratislava, Lab theatre of the Academy of Performing Arts, Radošiná Naive Theatre; the “Homeless Theatre” based in the Pisztory Palace, and some community theatres. The Astorka theatre will give a guest performance in the town cultural centre in Senec.

Outside the capital, the Jonáš Záborský Theatre in Prešov will join the project, as will the State Theatre, the Hungarian Thalia Színház, Haliganda theatres and the Puppet Theatre in Košice. The full programme and a list of participating theatres can be found (alas, only in Slovak) at nocdivadiel.sk.

The philosophy of “Theatre Night” is to get visitors involved, intrigued and allow them to discover the genius loci of a theatre house: the atmosphere, the backstage, the special magic that this artistic genre has offered for a millennium, albeit originally in much more modest milieus. Now theatres will join forces to give them an unforgettable experience and memory.