THE MAIN street in Košice maintained its refinement even in 1951 when it was called Lenin’s Street. The fact that the regime had changed it to a communist one a mere three years prior can be seen from the sign Zdroj on the shop in the right bottom corner in this postcard. Throughout the communist era, people used to buy groceries in shops of that name. 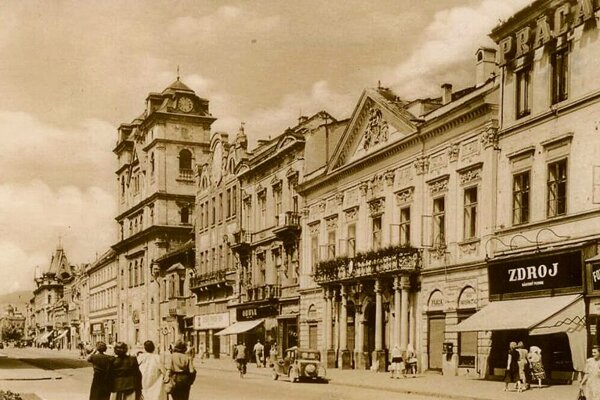 Above the shop, two storeys higher, the big board Práca (i.e. Work) can be seen as this was the advertisement for a newspaper in which citizens of the then-Czechoslovakia were able to read how everything was going according to plan and how everyone was doing excellent.

The central building in the row of houses is the former town hall (second from right), built in 1779-1789 in the Baroque-Classicist style, it served the town until 1928 when the councillors moved to another building.

There were several town halls in Košice during the past centuries: initially, still in the Middle Ages, the town leadership tended to meet in the richtár’s (mayor’s) home. Only later, when Košice became better off economically, a building was constructed specifically for this purpose. The richer the town was, the more splendid was the town hall usually was as well.

The oldest known Košice mayor was Arnold, the mention of whom dates back to 1307. During the long years of the town’s existence, many people took their turns in this post, while some of them managed to hold this high, respected office repeatedly.