THE KLEZMORE Vienna festival celebrated its 10th year last year, in which time it managed to get established as a respected European festival of klezmer, the traditional music of the central European Jewish community. 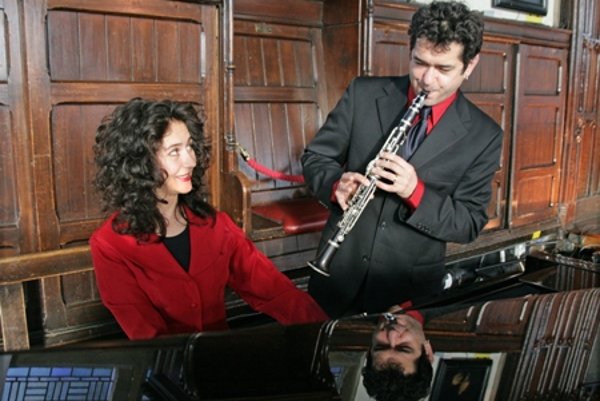 THE KLEZMORE Vienna festival celebrated its 10th year last year, in which time it managed to get established as a respected European festival of klezmer, the traditional music of the central European Jewish community.

In 2014, it even expanded to another capital and another country: the first edition of KlezMore Bratislava takes place on November 10 and 14, bringing not just the local Pressburger Klezmer Band (PKB), but also the Latvian singer Sasha Lurje at the first concert; and top British clarinettist of this genre, Merlin Shepherd, and his Russian-born wife Polina on piano at the latter one. On November 10, David Schimmer and Linda Luptáková will instruct how to dance the traditional Jewish dances connected with this type of music.

The first Bratislava concert, a more secular one (including the dance gig) will take place in the DPOH City Theatre where Sasha Lurje will present her innovative, modern perception of klez-mer and the PKB will pre-miere their new concert programme called Juh / South.

The second, more spiritual concert, with Merlin and Polina Shepherd, will take place in Klarisky (Clarissen) concert hall, a former church of a convent.

“In Bratislava, we have lacked something like this [festival] for a long time already,” PKB’s violinist Andrej Werner informed in a press release. “This year, the Bratislava part will be added to the Vienna part. This will help us get the festival started, in that we will become a part of a brand established already for 10 years – and in that we perceive the festival not just within one city, but across the border. I think that Bratislava will give Vienna two very interesting concerts that have the potential to become highlights.” He added that there is an advantageous ticket for both concerts and that the Slovak part was made by the Tradition civic association, in collaboration with the Bratislava Cultural and Information Centre (BKIS) and with the Austrian organiser, Friedl Preisl.

“We selected guests both with clear intent, but also randomly,” Werner told The Slovak Spectator. “To be honest, the original idea about the dramaturgy was slightly different, but we had to manage with the budget we could get. We met Sasha Lurje in Copenhagen where she performed as solo singer in the project of pre-World War II Jewish songs from Berlin “Semer Label Reloaded”. We decided to invite Merlin repeatedly, as Bratislava audiences already know him. But not to repeat the gig, we opted for a more intimate concert in his case, in the sacral environment of Clarissen. Merlin will play with his wife, Polina, born in the Russian city of Kazan, who is an excellent singer and pianist.”

After capital, the Juh tour will then continue on November 15 at Stanica Žilina-Záriečie, on December 5 in the Piano club in Trenčín, and on December 18 in Kasárne/Kulturpark in Košice. The tour, wandering not only physically around Slovakia, but also musically from Slovakia to the south, thus the name – will mark PKB’s 20th anniversary in 2015.

“Next year, there will be a large celebration,” Werner promised. “PKB will turn 20. We would like to link this anniversary with a new album and a due tour. A festive launch could be made at the next, second year of the KlezMore Bratislava festival,” Werner added.