A robust growth of the minimum wage, an extension of higher collective agreements and changes in temporary employment are the developments with the biggest impact on the labour market in 2014 and beyond. While these are praised by the Robert Fico government and trade unions, employers expect that these will have a negative influence on the labour market and the competitiveness of companies. On the other hand, they lack effective measures to combat unemployment, which is decreasing but not fast enough. 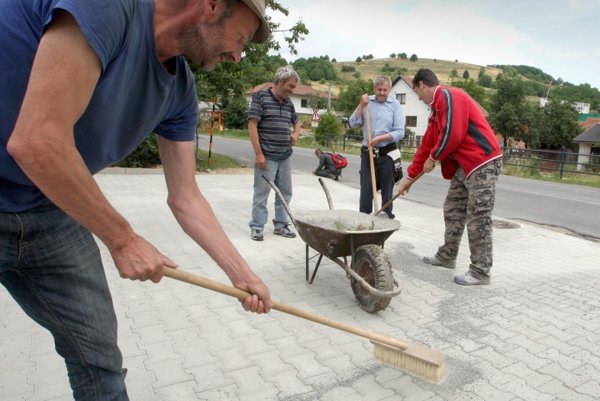 A robust growth of the minimum wage, an extension of higher collective agreements and changes in temporary employment are the developments with the biggest impact on the labour market in 2014 and beyond. While these are praised by the Robert Fico government and trade unions, employers expect that these will have a negative influence on the labour market and the competitiveness of companies. On the other hand, they lack effective measures to combat unemployment, which is decreasing but not fast enough.

“The most significant fact is that, alas, no change, from the viewpoint of statistics, has happened [so far in 2014],” Martin Hošták, the secretary of the National Union of Employers (RÚZ), told The Slovak Spectator. “The government has not been responding to the fact that Slovakia is one of the countries with the highest jobless rates in the EU with adequate measures – quite the contrary: the situation on the labour market is stagnating and the problems that have not been solved for a long period of time are piling up.”

The number of the unemployed ready to take a job immediately stood at 12.44 percent in September, down by 1.4 percentage points on annualised terms, based on data of the Central Office of Labour, Social Affairs and Family.

Hošták listed putting the revision to the law on collective bargaining into practice and the increase of the minimum wage as the most important changes of 2014. The revision, valid as of the beginning of 2014, re-introduced forced extension of higher-level collective agreements to all businesses in a given industrial sector that have not signed them individually.

On the other hand, the Confederation of Trade Unions (KOZ) praises the revision, pointing out that workers sheltered by collective agreements have 17-19 percent higher wages compared to those who work for employers where such agreements are not signed.

“Extension of higher-level collective agreements is a standard tool to equalise working and wage conditions and conditions of employment used in several member countries of the European Union,” Martina Nemethová, spokesperson of KOZ told The Slovak Spectator. “Thus, it is necessary to see the main positive feature which the revision brings, especially in the improvement of the position of employees, increasing protection of their labour-legal relations and securing their labour-legal rights.”

Rastislav Machunka, head of the Federation of Employers’ Associations (AZZZ), and Luboš Sirota, CEO of McRoy Group, agreed that the hike in the minimum wage would have a negative influence on the labour market and competitiveness of companies.

The cabinet approved the increase of the minimum wage from €352 in 2014 to €380 (€2.184 per hour) in 2015, which represents an increase of €28 or 7.95 percent on October 14 after the tripartite consisting of representatives of the government, employers and trade unions had failed to reach a consensus on the matter.

By the more significant increase of the minimum wage, the cabinet wants to secure a higher monthly income than the poverty threshold, which is a level of income set at 60 percent of the median household income. The poverty threshold in 2013 was €337 per month, according to data from the Slovak Statistics Office.

Prime Minister Robert Fico, who said that the minimum wage is for him a holy thing, marked the minimum wage increase as one of the fulfilled measures from the €250 million package of 15 positive social measures his cabinet has proposed. As he said after the cabinet session, it is the duty of the cabinet, after hard consolidation, to arrive at measures that increase standards of living.

“We will constantly create pressure on increasing the minimum wage,” said Fico as cited by the SITA newswire. “It must be more worthwhile for people to work than to sit at home and take social benefits.”

Representatives of employers have been against such a high increase from the very beginning, claiming that the increase in labour costs that will be brought on by the minimum wage increase will have many negative effects on the competitiveness of Slovakia’s industry.

In response to the criticism of employers, PM Fico responded that the cabinet offers as compensation a mechanism of reducing of health insurance contributions to them. However, Hošták does not regard the reduction as high enough to compensate for the increase in labour costs.

On the other hand, Machunka believes that the hike in the minimum wage, in combination with the reduction of health insurance contributions might have a neutral impact on the labour market, “while the increase of the disposable income of low-income employees will positively influence domestic consumption”.

Sirota expects that the record increase in the minimum wage, along with approved changes limiting temporary employment will have the biggest impact on the labour market in 2015. He pointed out that the hike in the minimum wage would also increase various extra pays and thus its influence would be negative. He estimates that limiting temporary employment may mean a loss of jobs to about 20,000 people and may reduce for companies the space for responding to changes in orders. He added that, along with negative impacts from the extension of higher collective agreements as a consequence of growth, employment may slow down in 2015.

In October, parliament began discussing a draft revision to the Labour Code, tightening conditions of temporary employment in benefit of employees with the plan to make it effective as of the beginning of 2015. The revision, praised by trade unions, introduces, among other things, the so-called shared responsibility principle. This means that temporary employees must earn the same salary as regular employees if they both do the same work. If a temporary employee earns less, the agency would have to pay the difference from its own budget. If the agency fails to cover this cost, the difference would have to be paid by the company.

The revision should also put a 24-month cap on the maximum period of time that a temporary employee can work for the same firm. It will be possible to prolong an agreement for one specific temporary employee no more than five times. This would prevent companies from employing one person for several years without offering him or her a permanent position.

“[I expect] rather stagnation, and in terms of this year’s measures or macroeconomic development in the EU, a moderate worsening of the situation in the labour market and growth of unemployment,” said Hošták.

While the global revival of the economy during the first half of 2014 reflected positively on Slovakia’s employment, Machunka is not so optimistic for the future, pointing to risks posed by the Russo-Ukrainian conflict and sanctions resulting from this between Russia and the EU.

“There are serious indications of a worsening of the global economy, which with a delay of some months will also affect Slovakia,” said Machunka. “What the impact on Slovakia would be, we are not able to forecast for now.”

The average wage in Slovakia keeps lagging behind the biggest earners in the EU. The average monthly gross wage in Slovakia was €835 in 2013, based on statistics from Eurostat and Poštová Banka’s calculations, while the average monthly net wage was €645. Compared with neighbouring countries, Austria reports the highest wages (gross €3,474, net €2,283) while Czech workers also earn more than Slovaks, (€958 gross or €740 net). Workers in Poland (gross €823, net €619) and Hungary (gross €818, net €536) earn less.

“But one should not forget that when comparing wages, it is necessary to also take into consideration the other side of the coin and this is the price level in the given country and costs of living,” Poštová Banka wrote in its analysis. “And these are traditionally higher in western economies than in Slovakia.”

Katarína Muchová, macroeconomic and fixed income analyst at the department of market research of the Slovenská Sporiteľňa agreed, adding that real wage growth has finally caught up with the growth of labour productivity. Real wages grew in 2014, whereby their growth accelerated from 4.2 percent y/y in the first quarter of 2014 to 4.9 percent in Q2 2014.

“When we consider the current position of labour productivity in light of its 2005 value, Slovakia fares rather well in comparison with its neighbouring countries, i.e. real labour productivity growth measured per hour worked,” said Muchová, adding that labour productivity is affected by labour market developments, especially by increases in the number of employed persons, as well as real GDP growth.

Labour productivity in Slovakia rose by 2.8 percent in 2013, according to Eurostat, compared to the 0.6 percent growth in the EU28. In the Czech Republic it was -0.2 percent, in Hungary 1 percent, in Poland 1.8 percent, and in Austria 1.1 percent.

But, according to Gábriš, it is important that the wage growth again reflects the development of productivity in the future because otherwise a wage growth larger than that of labour productivity might cause problems for a generation of jobs.

With respect to future development, Muchová recalled that the labour market has improved significantly in the past few months.

“Unemployment is decreasing and the growth of real wages is almost on par with nominal wage growth due to low inflation,” said Muchová. “However, ongoing geopolitical tensions and the sluggish performance of some eurozone members, most notably Germany, are dampening prospects for next year’s GDP growth. We may see lower growth rates of real wages, but labour productivity should be growing steadily.”