After years of neglecting the vocational training of students, Slovakia is gradually returning to a so-called dual education scheme. While several companies across the country have launched programmes to train workers lacking in the market, the Education Ministry is taking steps to launch the nation-wide project at vocational schools as soon as September 2015. 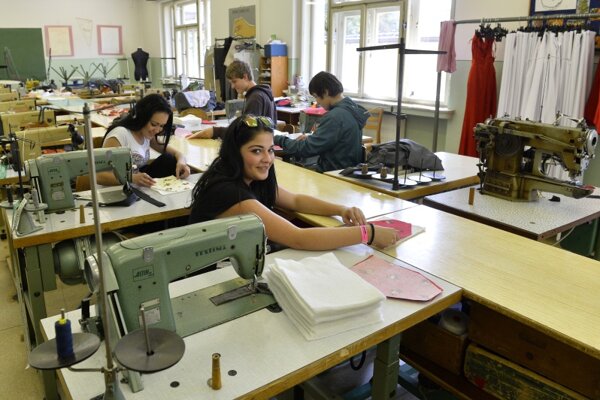 “The aim of the ministry is to complete the law on vocational education in following months in order to create a clear framework for this type of education and to distil into it the motivating environment so the local companies take, for example, five students and provide them with the practical part of education,” Education Minister Peter Pellegrini told the Hospodárske Noviny daily in early September.

Representatives of foreign chambers in Slovakia praise the general trend and the ministry initiative specifically, but warn that the system needs to also work in practice.

Dual education is nothing new in Slovakia. Educators followed the scheme – which blends classroom learning with hands-on work experience – in the past, but it gradually faded after the fall of communism. More recently, however, employers are calling for the return to that system, citing a lack of work-ready graduates.

Several companies have already established cooperation with schools and train students directly on their premises. Most recently, the Education Ministry and the Austrian Embassy to Slovakia introduced the Young Stars pilot project that should serve as an example of implementing the dual education scheme in Slovakia as well as abroad, the TASR newswire reported.

“We have to pick up what is good in Slovakia,” Pellegrini told the press on October 9, as quoted by TASR, “from the traditions we are used to, and to add modern elements that work excellently abroad.”
Within the project, the vocational school in Zlaté Moravce cooperates with the consortium of companies, composed of four Austrian firms (MIBA Steeltec, ZKW Slovakia, Pankl Automotive Slovakia and HTP Slovakia Vráble), two German (Matador Automotive Vráble and Secop) and two Slovak firms (Bauer Gear Motor Slovakia and Švec a spol). The project started on September 2.

“In all, 33 students started to study in two pilot classes and each of these firms has their own students who undergo practical training there,” Martina Krišková, project manager of the commerce department at the Austrian Embassy to Slovakia, told The Slovak Spectator.

Unlike other projects, Krišková said, students start their practical education in the first grade. The ratio of theory and practice is 40:60. Students alternate weeks in classrooms and the workplace, and at the end of the school year spend an entire month in the company.

In addition to this, students get financial bonuses for their work in the firm, TASR wrote.

Also the German-Slovak Chamber of Industry and Commerce (SNOPK), in cooperation with the Slovak Education Ministry, launched a project in February 2014 called fit4future, aimed at encouraging practical education for pupils in the technical sphere. It focuses mostly on improving the cooperation between technical schools and improves the quality of practical training, helps with increasing qualifications and with job placement, according to the official website.

Ján Kokorák from SNOPK said that there are several companies that cooperate with vocational schools, mostly in the automotive, engineering, electrotechnical sectors, but also in areas as diverse as shoe-making.

Except for the chambers, several companies active in various sectors have established successful collaboration with schools in preparing the students for future careers. The reasons stated by the companies addressed by The Slovak Spectator include aging employees, but also the missing qualified workers and lack of interest from students in studying technical specialisations.

The companies addressed by The Slovak Spectator assess the cooperation positively. For Matador Group, the cooperation with schools means that they get young students, allowing them to connect theory and practice, as well as new employees after they graduate. Moreover, they can also contribute to improving the studies via training and solutions contained in bachelor, diploma and dissertation theses, company’s spokeswoman Linda Golejová said.

The Education Ministry is also taking steps with three key priorities: the development of secondary vocational schools, the national system of qualifications (whose ambition is to describe 1,000 qualifications and define the basic skills and knowledge required for certain professions) and modernising primary schools.

Under the scheme introduced in early June, the school will be responsible only for theory, while all of the practical training will take place in a specific company. The firms will help evaluate the work of the students and in the end say whether they can take the final exams, Július Hron, coordinator of employers at the government’s council for vocational education and vice-president of the Slovak Automotive Industry Association, explained.

In return for participating, the Education Ministry proposes to grant companies some kind of tax bonus, the public-service Slovak Radio (SRo) reported. When preparing the scheme, the authors cooperated with foreign investors and foreign chambers of commerce, especially from Germany and Austria.

The ministry also works on the new law on vocational education that will legally anchor the new framework for dual education as of the next school year. It should submit the draft to the government by the end of this year, ministry spokeswoman Beáta Dupaľová Ksenzsighová told The Slovak Spectator. Testing of the dual education scheme began at 21 schools on September 2. The schools focus on different fields, like metallurgy, mining, engineering, electrotechnics, technical chemistry of silicates, technical and applied chemistry, food, wood processing, construction, geodesy and cartography, and agriculture, Dupaľová Ksenzsighová said.

Both Krišková and Kokorák consider the recent steps of the government positive. Kokorák, however, adds that the new law should also be prepared in a way it is “applicable in practice” and that sets conditions motivating companies to join in.

“Since the companies know best what they need students for and which practical experience they need to obtain during the practice, it is necessary that the schools listen and adapt to the requirements of employers,” Kokorák told The Slovak Spectator.