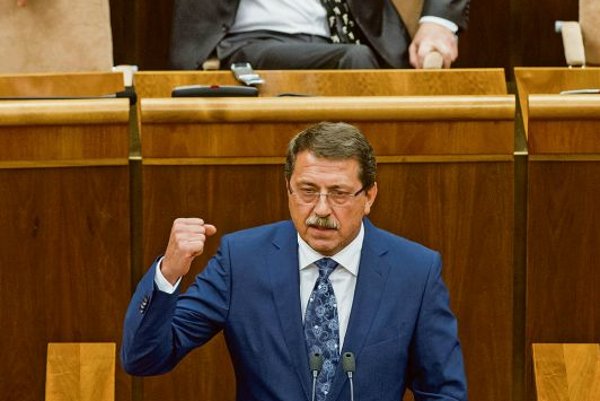 Though Fico has been firm in his support for Paška, new information keeps surfacing on how Paška, one of Smer’s noted strongmen, might have sustained influence over part of the health-care business in Slovakia. Paška is now suing a number of opposition deputies for their public claims about his alleged influence.

In the wake of the scandal, political ethics group, the Fair-Play Alliance (AFP), has again called on parliament to pass rules allowing only firms with a transparent ownership structure to bid on public tenders, according to its statement.

“Until we know the real economic beneficiaries of the firms, we will not be able to defend ourselves,” said AFP head Zuzana Wienk.

Fico, whose Smer party controls an outright majority in parliament, easily survived a nearly 50-hour-long opposition attempt to have him sacked on November 10 for what the opposition called his co-responsibility for developing a system fostering corruption and cronyism. Fico called the attempt completely groundless pre-election theatre.

Parliament also rejected an opposition proposal to discuss the political future of Paška.

Meanwhile, hundreds of people gathered on November 11 in front of Paška’s lavish Košice residence and called on the speaker of parliament to resign. The protest was organised by independent MP Alojz Hlina. The Sme daily counted around 400 people at the protest.

The winning bid by Medical Group SK at almost €1.6 million for a Philips Ingenuity Core 128 CT scanner was €600,000 higher than the CT device from the cancelled tender, Sme reported. At the time of the deal, Zmajkovičová headed the hospital’s supervisory board.

The leadership of the hospital announced on November 6 that they are seeking ways to cancel the contract with Medical Group SK, yet director of the hospital Mária Domčeková in an interview with Sme on November 12, insisted that the purchase came after a legitimate tender.

Medical Group SK was co-founded by Paška before he entered politics. The speaker of parliament claims that he ended his activities with Medical Group SK as a minority shareholder 13 years ago.

When asked about Paška’s fate in association with the CT scandal, Fico responded on November 4 that the speaker of parliament should use all available legal means to sue independent MP Daniel Lipšic, calling the claims of opposition “nonsense”.

The sole shareholder of Medical Group SK since 2012 is the Prague-based Medical Group Europe with lawyer Koval serving as CEO. Bilá was a member of the board of directors, Sme reported.

Koval also owns the company RK2 from Banská Bystrica, which according to the trade registry owns Medical Group Europe. RK2 was owned in the past by shell firms in Belize and Cyprus.

“I have never met Mr Paška and I do not know him,” Koval said, while Paška too claims not to have anything in common with Koval.

According to the Czech trade registry, Medical Group Europe shelters five firms, all based in Košice: Medical Group SK, Pharmacy of L. Pasteur, Pharmacy House of Health, Pharmamedia and Suisse Pharmamacia. Paška was a part of all these firms in the past, according to Sme.

Paška keeps claiming that he has ended these activities and that when he was involved in these firms he had no idea he would become an MP. However, he became a deputy in 2002 while also appearing as a co-owner in several of these firms until the year 2008, Sme reported. Shortly after his departure, Bilá became the authorised representative for all of them.

Lipšic claimed that the owner of Medical Group SK and a company called Penta Enterprises Ltd. have registered addresses at the same cottage in Belize, according to TASR.

Penta denied having any ties with Penta Enterprises Ltd. It announced the intention to take legal action against Lipšic, TASR wrote.

Paška, after suing Lipšic, explained that he is defending himself against claims that he organised and influenced the purchase of the CT device at the hospital and that he owns the firm Medical Group while having illicit gains from this business while covering it up with a shell firm based in Belize or even Penta, TASR reported.

Paška insisted that no device has been supplied yet and the hospital has not spent a single euro, adding that “I claim on my honour that I have never owned any shell company in Belize, nor in any other tax haven”, TASR cited.

Meanwhile, former health minister Ivan Uhliarik and his party, the Christian Democratic Movement (KDH), warned that the Piešťany deal has a competitor in terms of a lavishly expensive CT device: the Medical School of the Pavol Jozef Šafárik University in Košice bought a magnetic resonance image (MRI) scanner made by Siemens worth more than €3 million while the device was sold via the company Pharma Group residing in Veľké Leváre.

“I am asking, why again one mediator with a provision which in this case is really a mega provision, even bigger than in the case of the Piešťany CT [was chosen],” Uhliarik said, as quoted by the SITA newswire, suggesting that the Masaryk University in Brno bought an even better device for €1.9 million.

In return, Fico warned about what he called disadvantageous rentals and purchases of health-care devices under the tenure of Uhliarik as health minister. Fico claims that Uhliarik signed at least nine contracts worth €6.5 million from European Union funding, which was cancelled by his successor Zvolenská. Now, the prime minister demands that Uhliarik give up his deputy mandate.

Uhliarik responded that the ruling Smer party is trying to cover its own mistakes in the health sector by reopening older cases.

Zvolenská, the third minister to quit the Fico cabinet, as well as the only female minister, is now replaced by State Secretary of the Health Ministry Viliam Čislák, who before joining the ministry worked for the network of regional hospitals Svet Zdravia owned by the financial group Penta. Zvolenská also had worked for Penta, Sme wrote.

Radoslav Čuha, head of the teaching hospital in Prešov, will become the new state secretary of the Health Ministry. Before he was appointed to lead the hospital in Prešov in 2012, he had worked for the network of hospitals under Svet Zdravia, the Omediach.com website wrote.

The new state secretary made headlines last year after he accidentally sent an email to a reporter of the private broadcaster TV Markíza instead of the hospital’s spokesperson. The reporter was covering the story about erasing medical records in the hospital.

“We don’t want to respond, and please, do not respond in any way; you can get out of it [by saying] you are on sick leave or holiday,” the email read.

After the reporter made a story based on the email, Čuha sent an open letter to the reporter, criticising the way in which she made the report and saying she did not use his whole statement, Omediach.com wrote.

Moreover, Sme reported last year that Čuha made it to Prešov’s regional parliament thanks to votes from two Roma settlements, according to Omediach.com.