WHAT is called the Velvet (zamatová) or Gentle (nežná) Revolution in the then Czechoslovakia and which brought down the totalitarian communist regime in 1989 started in Slovakia on November 16, while all of the November 1989 events took place in an environment of falling regimes in neighbouring countries such as East Germany, Hungary or Poland as well as in the Soviet Union. 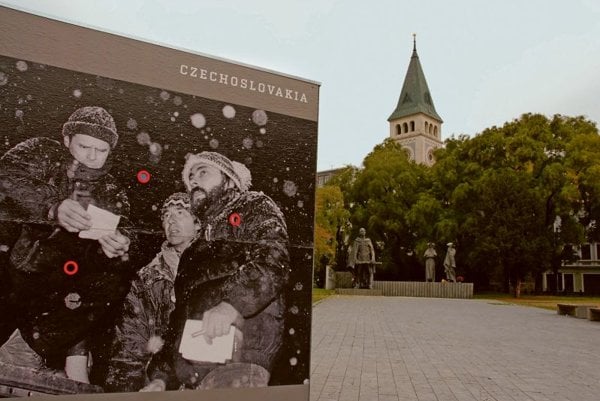 WHAT is called the Velvet (zamatová) or Gentle (nežná) Revolution in the then Czechoslovakia and which brought down the totalitarian communist regime in 1989 started in Slovakia on November 16, while all of the November 1989 events took place in an environment of falling regimes in neighbouring countries such as East Germany, Hungary or Poland as well as in the Soviet Union.

On November 16, about 300 students of Bratislava’s universities met on the eve of the International Students’ Day and marched through the city to the building of the Education Ministry in order to discuss the need to democratise education. The next day students in Prague held a rally to mark the International Students’ Day. The rally was brutally suppressed when the police beat students with batons and detained them, an event which mobilised the whole society. On November 18, students, demanding a thorough investigation of the brutal acts of the police discussed the next course of action at their faculties. The next day, dissidents, the opposition and civic activists launched movements, the Civic Forum (Občanské Fórum – OF) in Prague and the Public Against Violence (Verejnosť Proti Násiliu – VPN) in Bratislava.

On December 20 a series of mass demonstrations started. Those biggest ones were held at Václavské Square in the country’s capital, Prague, and at the SNP Square in the Slovak capital of Bratislava. University students started a strike and later theatres, firstly from Prague and later also from other cities including Bratislava, joined the strike too. The students required resignation of representatives of the government and the Czechoslovak Communist Party (KSČ) and abolition of the Constitution’s article about the leading role of the KSČ in the society. The then prime minister Ladislav Adamec launched talks with the opposition. On November 24 the top leadership of the KSČ led by General Secretary Miloš Jakeš resigned. Jakeš was replaced by Karel Urbánek.

A two-hour nation-wide general strike on November 27 confirmed the will of the citizens to end the rule of the single party and the Czechoslovak Parliament repealed the article of the constitution giving the communist party a monopoly of power.

In early December ordinary citizens joined by soldiers and others started to dismantle barbed-wire fences dividing the country from the West on the border with Austria.

On December 10, the cabinet of Ladislav Adamec resigned and was replaced by the so-called cabinet of national understanding led by Marián Čalfa. The same day the then president Gustáv Husák resigned too. On December 28 the Federal Parliament elected Alexander Dubček the Speaker of Czechoslovak Parliament. One day later the parliament elected Václav Havel the new head of the state. The parliament also decided to hold free democratic parliamentary elections in June 1990, the first ones since 1946.

In 1990 the name of the state changed to the Czech and Slovak Federal Republic. The turnout in the parliamentary election held on June 8 and 9 was 95 percent. While the Civic Forum won in the Czech Republic with 53.2 percent, the VPN in Slovakia gained 29.3 percent, followed by the Christian-Democratic Movement (KDH) with 19.2 percent and the Slovak National Party (SNS) with 13.9 percent. Communists got 13.3 percent and later broke into ultra-communists (the Communist Party of Slovakia) and the Party of the Democratic Left (SDĽ).

From TASR and SITA newswires and others