Shelves are fuller and wallets are fatter

TWENTY-FIVE years ago, Slovakia’s economy was centrally-planned and prices as well as wages were regulated. The fall of the communist regime, apart from civic liberties, also brought to Slovaks a market economy (along with its positive and negative features) greater selection in shops as well as more shopping opportunities. 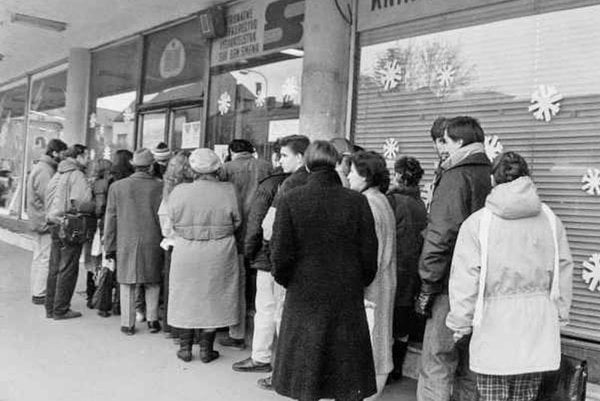 TWENTY-FIVE years ago, Slovakia’s economy was centrally-planned and prices as well as wages were regulated. The fall of the communist regime, apart from civic liberties, also brought to Slovaks a market economy (along with its positive and negative features) greater selection in shops as well as more shopping opportunities.

“The path from a centrally-planned economy was not easy,” Dana Vrabcová, analyst with Poštová Banka said. “And thus also today we can meet people feeling nostalgia for the old regime.”

Back in 1989 one litre of milk cost two Czechoslovak crowns (Kčs) and 125 grams of butter five crowns, which is a fraction of what they cost now when converted into euros. In 2009, Slovakia switched from the Slovak crown to the euro at the rate of SKK30.1260 to one euro. But Vrabcová points out that our standards of living cannot be measured by one or two indicators because it is very difficult to measure our feelings of health, happiness or personal fulfilment.

“When assessing our standards of living we usually take our incomes and what we can afford to buy with them as the base,” Vrabcová said. “It is clearly incomes of people which are considered to be one of the most sensitive questions when scrutinising standards of living in the population.”

When looking strictly at statistical data, the average nominal monthly wage rose to €824 in 2013 from 3,142 crowns in 1989. In the European single currency, this would have been €104, thus indicating that the average nominal monthly wage rose eight times. When looking through the same prism, consumer prices rose 7.5 times. In general, the first years after 1989 brought higher prices and lower real wages.

“The development of real wages, i.e. nominal wages, cleansed of the influence of inflation brings a more actual look into the change of our incomes,” said Vrabcová. “Slovaks managed to earn in real terms, by 2007 only, 3 percent more than in 1989.”

UniCredit Bank Czech Republic and Slovakia recalls in its analysis of 25 years of Slovakia’s Economy since the Velvet Revolution that prices before 1989 were regulated by the state.

“By the transition to the market economy prices were also released which, excepting monopoly sectors of electricity, gas and others, prices were left to the market itself,” Ľubomír Krošňák wrote in the analysis.

During the early 1990s there occurred a huge correction in prices, which were kept at artificially low levels. In 1990 the prices rose sharply by about one tenth while the most substantial growth followed in 1991.

“Already in January 1991 Slovakia registered the most massive increase in prices in its recent history – by 26.3 percent,” said Krošňák. “The year-on-year inflation culminated in June of the same year at the level of 73.7 percent.”

In 1991 prices rose 61.2 percent, while prices continued to grow also during the following years, and inflation decreased below 10 percent for the first time in 1995.

“The growth of prices occurred especially during the first half of the last 25 years,” said Krošňák. “Contrary to this, Slovakia’s economy registered in the beginning of 2014 a year-on-year drop in prices for the first time.”

“Real wages decreased in total by a sound 31 percent during the first two years after the revolution,” said Krošňák, adding that while the performance of Slovakia’s economy had achieved the 1989 level by 1996, real wages returned to this level only in 2007 and they should exceed the 1989 level by about 12 percent in 2014.

Poštová Banka considers the gross domestic product per capita measured by the purchasing power parity to be one of the most important indicators when measuring the standard of living.

While this indicator for the whole of Czechoslovakia stood at 56 percent of the average of 14 developed countries belonging to the European Community in 1989, the situation of Slovakia was much worse than that of the Czech Republic after the split of the federal republic in 1993. Even 15 years ago, Slovakia’s GDP per capita accounted for about half of the European average while in the case of the Czech Republic it was 71 percent. Until 2013 this improved to 74 and 80 percent, respectively.

“Today it is still heard from many Slovaks that bread and milk were cheaper during the communist regime,” Vrabcová wrote in her analysis. “And they are right. Today Slovaks need to work some minutes longer to buy these foods and by three than they did 25 years ago. On the other hand, we work less to buy most selected goods.”

While in 1989 Slovaks needed to work 14 minutes to buy one kilo of bread, now it is 15 minutes. To buy one litre of semi skim milk they need to work nine minutes while it was only six minutes in 1989.

Poštová Banka has calculated that a shopping basket of one loaf of bread, one stick of butter, 200 grams of salami, 200 grams of Eidam cheese, 10 eggs, two litres of milk, 0.5 kilo of fatback, one kilo of potatoes, 0.5 kilo of apples and four beers cost Slovaks 67 crowns or 216 minutes of work back in 1989. Nowadays such shopping costs €14, which means 161 minutes of work, thus by almost one hour less.

But Vrabcová points out that Slovaks need to work a much shorter time for purchases of durable goods. For example, they needed to work ten times longer to buy a colour TV than to buy a LCD TV today. In the case of a car or a fridge it was two times more.

“What has undoubtedly changed for the better during the last 25 years is the quality and availability of goods and services,” Vrabcová wrote, adding that it was very difficult to buy many goods, even though these did not rank among those considered luxurious. “Shortage of meat, fruit and accessories for households or toys forced people to stand in long queues in front of shops. Today we queue mostly only in front of cashiers, and even the trend that retail chains bring our shopping to us directly to the threshold of our flats is coming to us from the West.”

But it is also difficult to conclude which goods are necessary and which are luxury items; the latter include those increasing our wellbeing, but without which we can live.

“The more the consumer can afford to spend from his or her income for luxury goods, the higher comfort he or she achieves and his or her standard of living is higher,” Vrabcová wrote, adding that it is very difficult to make a strict border between necessary and luxury items. “Moreover, what was considered to be luxury 25 years before today is an absolute matter of course.”

She used the example of a washing machine. Before the revolution, only every third household owned one while now only two out of 100 households do not have one.

Nowadays, Slovaks spend on average 20 percent of their gross expenses on food and non-alcoholic beverages, according to Poštová Banka’s analysis.

“This is still a higher share than in countries of western Europe, but compared with the past, there is some improvement,” said Vrabcová, recalling that before 1989 it was almost 40 percent. “A smaller share of expenses on basic goods enlarges the space for purchase of more luxury goods and services. Thus Slovak families can afford much more culture, holidays, eating in restaurants or accommodation in hotels than in 1989.”

On the other hand, the revolution in 1989 brought the so-far unknown phenomenon of unemployment and wider differences in wages in terms of individual sectors of the economy. While being unemployed was punishable during the previous regime, the average wage in the sector with the lowest earnings was two thirds of that in the sector with the highest wages in 1989; in 2013 it was less than one third, according to UniCredit.

“Contrary to the present, the term ‘unemployment’ did not exist or could not exist during the communist regime,” Vrabcová said. “Thus it is understandable that today’s household, whose head has lost his job or a layoff is hovering over him, perceives his standards of living and ability to buy goods and services much worse.”