GREAT political events and historical milestones are natural subjects of artworks and cultural projects – but it seems that sometimes time plays a crucial role. 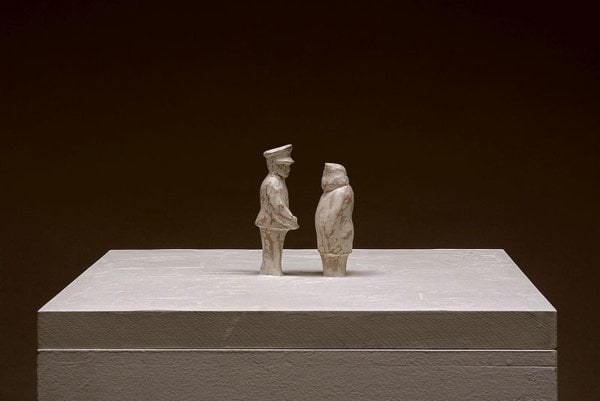 GREAT political events and historical milestones are natural subjects of artworks and cultural projects – but it seems that sometimes time plays a crucial role.

Events more than a thousand years old, like the coming of evangelists Cyril and Methodius to the territory of present-day Slovakia in 860 or the developments of the Great Moravian Empire as a whole, are more common and satisfactory topics for artists than the events that formed Slovak history only a few decades ago – the November Revolution of 1989, also called the Velvet Revolution.

It toppled the communist regime of then-Czechoslovakia and started a course of events that led to its split into two countries and to its transformation into a parliamentary democracy with a market economy.

The question, however, remains: how has this break-through historical point been mirrored in Slovak art and culture? More generally, how has Slovak art and culture developed since then from the point of view of political and social engagement? Starting from the point of disgust at the “obligatory” engagement and distortion of perception, as well as strict “communist party lines” and unification, how does this art depict the reality that 40 years of totalitarian regime firmly established?

As the 25th anniversary of the revolution – November 17 – neared, The Slovak Spectator approached some of the art and culture theoreticians, researchers, organisers and reviewers with questions about the happening of November 17, and also regarding the political and social motifs in art and culture.

“With a certain exaggeration, we could say that art, which was in opposition to the official state doctrine of socialist realism, had already developed such active forms that later found their fulfilment, or even culmination, during the November events,” Geržová answered.

She referenced Ján Budaj, one of the leaders of the November Revolution, who founded back in the 1970s, a Temporary Society of Intense Survival where he fought – together with artists, and also environmentalists – against the authoritarian rule of the communist party, trying to open the eyes of the public and rouse them to civic disobedience. The supreme ambition of these protests was to break the limits between art and life.

“What happened in the streets of Slovak towns in November 1989 could be seen as collective happenings that exceeded the ambitions of unofficial artists, as it was also thanks to them that the regime collapsed,” Geržová wrote, mentioning also the famous march from Bratislava to the Austrian town of Hainburg on December 10, 1989, organised by Ladislav Snopko (who would later become Culture Minister) and Martin Bútora (later the Slovak ambassador to the US) that made history as a large civic happening under the name Ahoj Európa / Hello Europe.

“Unlike other historical events during the previous regime, the image was rather a forced political order when the communist party took artists as hostages (like the portrayals of the Slovak National Uprising, liberation of Czechoslovakia by the Red Army and others), and the events of November remained free of this historical devaluation,” Geržová said.

“The November events and the Velvet Revolution are not – or rather, hardly ever – frequent subjects of theatre productions,” Darina Kárová opined. She noted as one of the few the performances in Stanica Žilina – Záriečie, the Chamber Theatre in Martin or in the City Theatre in Žilina, as well as the Malá scéna / Small Stage STU in Bratislava. The Theatre Institute organised a competition for the best expert study on the revolution’s 20th anniversary, and the Divadelná Nitra Association launched a project called Nitra’89 – Memory of the Region.

“The quantity of artwork surrounding the theme of No-vember 17 corresponds with the relation of Slovak citizens to this event – it is luke- warm,” Kárová continued. “It is manifested mostly on anniversaries. This is connected with overall scepticism in society and the scepticism from applying the revolution’s ideals in practice. However, many works and activities have appeared just now, on the 25th anniversary.”

“The events of the Velvet Revolution were pictured sur-prisingly rarely in Slovak cinematography,” Mišíková wrote. “In feature films, they play a part in stories of two films which come to terms with the transformation of society in a grotesque stylisation.”

These are It’s Better to Be Wealthy and Healthy Than Poor and Ill (Lepšie je byť bohatý a zdravý ako chudobný a chorý) by Juraj Jakubisko from 1992 which can be perceived as quite a direct, unaffected reflection on the euphoria and chaos of this period, Mišíková wrote, adding that Rivers of Babylon by Vladimír Balco from 1998 captures the end of the communist regime rather on the backdrop of the ensuing start of the “Mafia-style capita-lism” and the Mečiar’s era.

In the documentary cinematography, Zuzana Piussi dealt with November 17 in her movie “Men of Revolu-tion” which brings not just a subjective evaluation of these events by selected “men of the revolution”, but also an interesting confrontation between the past expectations and the current disillusions.

As for the social and political issues and their reflection in Slovak visual art, Geržová said that several young art historians are systemically exploring how the specific political situation reflects in visual art creation.

“Generally, it is stated that after 1989, art became de-politicised; not just in the sense that the authoritarian regime which had been forcing the ideological obedience of artists fell, but mainly because politically engaged art was abused by the former regime. Even if art became politically neutral after 1989, this doesn’t mean that artists have resigned from criticising politics,” Geržová wrote.

She commented on the 1990s, overshadowed by the autocratic rule of Mečiar, which did not generate politically engaged art, but rather civic activities initiated by artists.

“Real political activism was preferred to the aestheticisation of politics,” she explained. “The situation only changed after turn of the century, when we can see in the generation of younger artists not just individual, but also collective activities reacting to the topical situation in politics, society and culture, the output of which is, however, a specific artwork.”

As a model artist, Geržová suggests Jana Kapelová whose works are an example of the functioning connection between social engagement and activist art; or Martin Piaček’s cycle of statues Biggest Embarrassments of Slovak History. As a good example of an individualist way to tackle the past, she pointed to the recent exhibition on the Slovak National Uprising in the Kunsthalle Košice by Martin Piaček and Radko Mačuha, stressing the “obligatory”, rather than mandatory approach to this historical event.

In the theatrical world, Kárová also mentions a marked aversion of artists towards political issues after 1989.

“This is surely connected with the experience from the previous regime when political issues were strongly dictated by culture,” she noted, adding that a certain loosening came after more than 10 years. Kárová cited the play Tiso in the Aréna theatre in 2005 as the first important act of political theatre, with alternative or regional theatres following suit (Potôň, SkRAT, City theatre Žilina). The international project of Divadelná Nitra festival, Parallel Lives – The 20th century through the Eyes of Secret Police, also brought artworks trying to tackle this phenomenon. “However, most Slovak theatres are still awaiting such a transition from an elite theatre into a socially engaged one,” she summed up.

“One of the tendencies of the post-November 17 Slovak film is a certain apolitical nature, or avoiding social or directly political themes – maybe in reaction to 40 years of “engaged art”,” Mišíková opined. “This deflection then resulted in a common perception that Slovak film resorts to private or esoteric issues and doesn’t reflect the present times. With the growing volume of films produced, this has been gradually changing, and the spectre of genres that handle political or social themes is also enhanced.”

Mišíková mentioned Zuzana Piussi and Robert Kirchhoff in documentaries. In feature cinematography, film-makers have been coping with the heritage of communist past in retro- or historical dramas, capturing the connection between business and politics or the impact of economic transformation of society on human, specifically family, relationships.

“It is important to commemorate November 17,” Geržová concluded, “but building monuments creates the threat of later mythologisation and mystification of the past. It is important for the younger generation of artists – who didn’t experience the November Revolution – to search for their own way to the past from personal motivation to learn about the past and understand it.”

“Thematising November 17 in cinematography can seem, due to the importance of this historical break, as insufficient,” Mišíková summed up.

“If we compare the situation with other post-communist countries, for example Romania, where 1989 became one of the crucial motifs of the Romanian new wave, it is justified to ask whether there is sufficient social demand for film reflection of the November 17 events,” she said. “If not, the anniversary itself will not increase this demand. The era when films were created on the occasion of various anniversaries ended with the end of state monopoly on cinematography,” she concluded.