WHILE the SNP Square is the place in Bratislava which is most connected with the events of November 17, 1989, there are some more places closely linked with the events leading to the fall of the totalitarian regime in Slovakia. 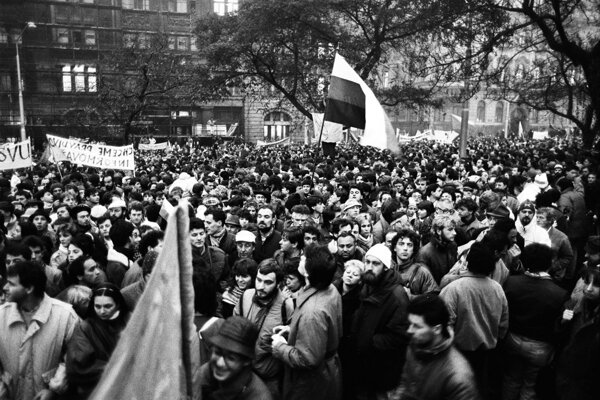 WHILE the SNP Square is the place in Bratislava which is most connected with the events of November 17, 1989, there are some more places closely linked with the events leading to the fall of the totalitarian regime in Slovakia.

“For example, Umelka (Umelecká Beseda Slovenská), where the movement Verejnosť Proti Násiliu (the Public Against Violence movement) was launched on November 19, 1989, is an important place,” Jašek said.

Jašek explained that at that time, visual artist and dissident Rudolf Sikora was just closing his exhibition in Umelka and this is why he had keys for the building. He belonged amongst initiators of a telephone relay race, by which they convened a wide spectrum of Bratislava activists against the regime for an evening meeting to Umelka.

“This [Mozart House] is a truly legendary place of the revolution, where all key decisions of the VPN movement took place,” Jašek said. “Paradoxically, before this there was the evening university of Marxism-Leninism.”

The SNP Square was the key place of the whole revolution. Here, mass demonstrations against the communist regime took place from November 22, 1989 on.

According to Jašek, choosing this place was logical, as it was the biggest square in Bratislava’s centre. At that time, the Slovak Television was there as well.

“Thus mass demonstration took place in front of eyes of workers of the key mass media,” said Jašek. “Maybe this speeded up the entry of the opposition into television, which happened on November 24. That day the Slovak Television broadcast a live discussion within Štúdio Dialog.”

Important rallies against the communist regime also took place on other squares. The very first one took place on the Hviezdoslavovo Square, while the then-Gottwaldovo Square (now Freedom Square) hosted a rally on November 20.

During first days of the revolution, large rallies took place also in front of the Palace of Justice, where at that time the political process against dissident and later Slovak prime minister Ján Čarnogurský took place.

Another important event was the march Ahoj Európa (Hello, Europe) on December 10, 1989, to the Austrian town of Hainburg.

One of the December rallies took also place in front of the villa of former communist leader Vasil Biľak.

An important place was also the building of Academia Istropolitana on Ventúrska Street, where the students’ movement had its seat. Another student rallying point was the assembly hall of Comenius University at Šafárikovo Square.