THE MONTH of Photography is an event that has been bringing this genre of visual art to Bratislava annually for 24 years now. Thus, November is the highlight of the year for all photo freaks in and around Slovakia. 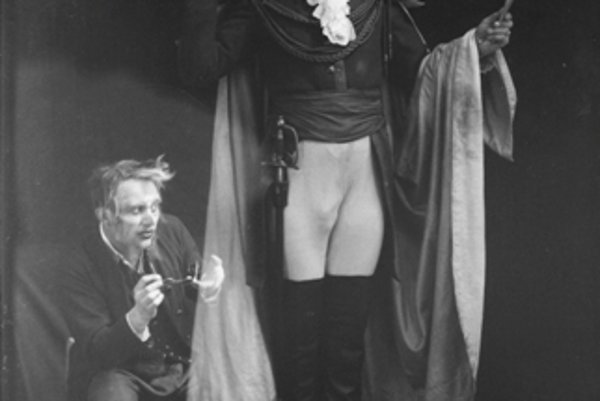 THE MONTH of Photography is an event that has been bringing this genre of visual art to Bratislava annually for 24 years now. Thus, November is the highlight of the year for all photo freaks in and around Slovakia.

However, it is not easy to offer a rich, manifold programme each year while satisfying the tastes of all different visitors. In 2014, the festival has grown into a big event, presenting numerous exhibitions, from smaller mono-exhibitions to vast installations of unrelated photographs – e.g. in the Sony World Photo Awards – from vintage photos made in outdated, rare techniques, to modern “punk” experiments, to journalistic photos.

Three exhibitions are taking place in a venue that has been traditionally one of the cores of this festival: the House of Art, now turned partially into the Kunsthalle. The first is called The Slovak New Wave and it is a smaller version of a one exhibited in Prague earlier, in which the early, student works of renowned contemporary Slovak photographers (living abroad) from 1980s are being shown. These artists are not a true group with a unified manifesto, many joint exhibitions, or vast collaborations. Rather, they are strongly individual and sometimes already well-established: Rudo Prekop, Vasil Stanko, Tono Stano, Martin Štrba, Miro Švolík, Kamil Varga, Peter Župník and late Jano Pavlík, with the last one being a tragic story. Pavlík, whose works are among the most eccentric, and even “punky”, according to the curators, involving texts, collages and assemblages, committed suicide in 1988.

The only thing that they have in common is that they studied photography at the Prague-based Film Academy and feeling like outcasts and strangers. They joined forces and made some “school assignments” together, serving as models for each other, sharing ideas, backdrops, and maybe even visual presentations.

The only one from among them who did not study photography, but film, is Martin Štrba who shot a film, called Wave versus Shore, about this phenomenon that accompanies this exhibition and will be screend also later.

“The section Symptoms of Pain illustrates exactly what intrigues us about the Slovak New Wave,” Pospěch explained. “The generation that is considered to have brought ease and playfulness to the rather melancholic Czech tradition, tragic, looking back to the past; suddenly began a chapter with numerous photos full of tragic, melancholy where these gentlemen made themselves electric chairs, tortured themselves, or were doing hard body-art exercises (albeit only for pictures).”

There is also a bilingual book accompanying the exhibition.

Another exhibition in Kunsthalle Bratislava is the aforementioned Sony World Photo Awards, a selection of the best photos striving to capture global events, personalities, landscapes, trends – or simply the most picturesque items to be reflected in photos.

The last one is called Photography in the Service of Propaganda and within the “Propaganda & Power” section, it shows the close connection between a regime, especially a totalitarian or controversial one, and its immortal image. The selection of photos from Albania, Belarus, Hungary, Eastern Germany (GDR), Fascist Germany, Slovakia, Portugal and Bulgaria, curated by Michaela Bosáková and Bohunka Koklesová, focuses on the years 1939-1970. All information on panels are in Slovak and English, and The Slovak New Wave also has additional information on leaflets positioned at the beginning of each section.

Another exhibition that revolves around one particular motif and historical era is The Theatrical World 1839-1939, which shows the beginnings of this genre and its development in Slovakia and in the Slovak diaspora to the US. Before the 1920s, the theatrical world was photographed mainly in studios, in its arranged form. Only in the first half of the 20th century did authentic photos from theatre performances start to be produced.

The photos in this smaller exhibition in the headquarters of the Slovak National Museum (SNM) comprise professional as well as amateur theatres, portraits of writers and theatre-makers (including guests to Slovakia like Fyodor Shalyapin or Michiko Tanaka-Meinl), but also urban staged events like rural feasts and rituals.

Photos have been collected from museums and galleries in Bratislava, Košice, Martin, the Theatre Institute, national archives and also private collection of Miklós Vojtek and curated by Anna Grusková. Some of them have been digitalised and are shown on the screens in sequels. Some photographs were made in intriguing technologies, like calotype, albumen print, coloured dry plate (gelatine process), or collodion process. Bilingual information is also available on panels and in a bulletin.

Older photos also feature in the exhibition in the Pálffy Palace of the Bratislava City Gallery (GMB). There you can find the works of an Austrian photographer of Moravian origin: Rudolf Koppitz (1884-1936), who first studied and then also lectured at the Royal School of Graphics in Vienna under Czech symbolist Karel Novák. Koppitz is a pioneer not only in some genres (e.g. group nudes, male nude photos, where it was mostly himself who posed), but also in some ways of, for example, depicting the entire landscape, called Heimatfotografie (rural homeland photos) in the 1930s, or dynamic studies of nude photos.

He also used some special technologies, like bromoil transfer prints, as early as in 1923. The scope of his objects and models was enormous, from his own family and himself, through dancers – like in the world-famous photo Movement Study – and actors to various landscapes and sceneries that create something like a tourism-promo photographs, not just in Austria, but also in Hungary and other countries, hailing and stressing the beauties of country life as opposed to the emerging urban lifestyle.

Movement Study from 1925, showing dancers of the Claudia Issachenko Ballet, is the most expensive photograph in central Europe, according to the Vienna-based Bonart Photoinstitut that also rendered the curators, Monika Faber and Magdalena Vukovic. A book accompanying the exhibition comprises more pictures than shown in GMB, but is only available in Czech, as it was made for the Koppitz exhibition in Czech city of Brno.

One floor lower, four global cities, Moscow, Rio, Shanghai and San Francisco make a certain counterpoint to the rural idylls of Koppitz. Italian photographer Gabriele Basilico, made de-personalised, de-humanised portraits of these metropolises, focusing on their certain aspects and finding innovative views of how to present them.

There are also a host of other exhibitions(for example the one of Milota Havránková in Umelka), including three presentations of Slovak photos in the Slovak Culture Institutes in Prague, Warsaw and Budapest, but also workshops, book launches, lectures and discussions All details can be found at sedf.sk/en/moph2014.