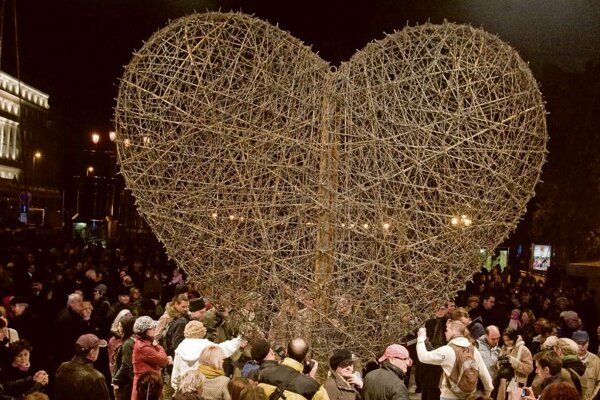 THE YOUNGER generation often does not know much about the November 1989 events, according to people approached by The Slovak Spectator. Though the youth is aware of the freedoms brought after the fall of the communism, they are often not interested in the event. To catch their attention, several institutions have come up with methods to give them first-hand experience of what happened.

“I have the impression that students are the least interested in recent history,” history teacher Branislav Kočan told The Slovak Spectator, adding that they seem like not being touched by the events.

According to Laco Oravec from the Milan Šimečka Foundation (NMŠ), one of the factors impacting the lack of interest of students is that Slovakia is still a country with unanchored values. Moreover, the values of the revolution have partially disappeared and have not been transferred to future generations.

“[Students] listen to the certain type of rhetoric and repeated phrases which have reduced the whole story of the period between 1948 and 1989, as well as the story of revolution, to some condensed, and even mythological, realm,” Oravec told The Slovak Spectator.

The opinions of young people are mostly affected by the environment they live in. This causes them to divide into various groups: from those who are nostalgic for the previous regime and defend the things that worked better in the past and trivialise the communist crimes, to those who were raised in the democratic spirit of hostility toward totalism, Oravec explained.

“But I think many students are in some kind of fog of indecisiveness, unclear sentiments and unclear personal relation to such events,” he added.

Young people discuss life before November ‘89 and the November events only rarely, according to a recent survey carried out in early October as a joint project of the Institute for Public Affairs (IVO), the Focus polling agency and the Czech Public Opinion Research Centre. It also revealed that most young people think the changes brought by November ‘89 were worth it, Zora Bútorová from IVO told The Slovak Spectator.

When comparing life before and after 1989, young people praise mostly the political freedoms they were granted, like the freedom of speech, the possibility to study, travel and work abroad, free access to information, and the possibility to participate in public affairs, Bútorová said in reference to the IVO survey.

On the other hand, Bútorová pointed to the high unemployment of young people, which is especially elevated in eastern and central Slovak regions.

“It is understandable that these young people are keeping more critical distance from November 1989,” Bútorová added.

Kočan adds that some students are also sensitive to other social changes that occurred after the Velvet Revolution, like the drop in the economic level of the country, or the increase in criminality.

Young people associate the November ‘89 events with opening the borders and the freedom of travel, mostly because these benefits are frequently presented by media, Tibor Ujlacký, spokesperson for the Nation’s Memory Institute (ÚPN), said.

“But hardships or crimes that some of their grandparents and parents had to endure during the totalitarian communist regime in former Czechoslovakia are only barely imaginable for them,” he told The Slovak Spectator.

According to Oravec, it is a question when to start teaching about some kinds of events to get some neutral and unbiased attitude. He suggests that the right time may be the turnover of one generation, i.e. after some 20 years.

Kočan says teachers are trying to find ways to increase the interest of youth in recent history. According to him, it is sometimes hard to explain the things which they personally experienced and thus consider obvious. Moreover, there are not many historical documents made about this issue. Though the issue is covered by the media, there are no balanced monographs, he said.

NMŠ also tries to motivate students to learn more about recent history. Back in June, it launched the Students in the Footsteps of Totalitarianism programme. The aim of the first project was to motivate students to collect information about how the Velvet Revolution unfolded in the place where they live. It was attended by schools in eight towns, Oravec explained.

Those who attended it were invited to Bratislava to attend various events held on the occasion of the 25th anniversary of the revolution. This will be one of the ways to help them feel the atmosphere, Oravec continued.

He added that they want to continue the programme in the future, focusing on other events that occurred during communism, like the normalisation of the 1970s.

“The effort of the ÚPN is to make the information about the communist regime and its practices vivid and relevant,” Ujlacký said, adding that young people should respect the victims of communism “so the red history of the nation will not accidentally return”.

Bullying is still a problem

MORE than one quarter of schoolchildren admitted they have harmed their classmates, with one quarter of boys and 20 percent of girls having had a personal negative experience with bullying. This stems from the results of the State School Inspection (ŠŠI) which checked 86 schools in the 2012-2013 school year.

Moreover, 43 percent of schoolchildren have witnessed bullying and 14 percent of children even said they do not feel safe at their school, the SITA newswire reported.

According to special education teacher Mária Barancová, both children and teachers encounter aggressive behaviour, vulgar language and threats from children at schools. She adds that bullying starts in kindergarten, when children are kicking and beating their peers to get the toys they want.

It is hard for teachers to reveal bullying since children are often afraid to talk about it. Some schools even installed video cameras to reveal the bullying at schools, she added, as reported by the TASR newswire.

“Any form of bullying is dangerous,” Barancová said, as quoted by SITA, adding that it can result in serious mental problems; therefore, it is necessary to deal with the issue.

One of the projects that take aim at bullying in schools is Second Step, which helps to solve problems like aggression, violence, bullying, torture or hyperactivity. Moreover, it helps children develop empathy, communication skills, moral behaviour and good social relations, as reported by TASR.

The project was established more than 15 years ago by the Committee for Children from Seattle, US. It has been implemented by various countries, including Slovakia.

In 2014 altogether 96 teachers across Slovakia have been trained, with the programme taking place at 54 schools. So far, 154 primary schools have joined in and implemented it into their curricula, TASR wrote.

The Second Step can be part of various subjects, said Eva Gajdošová, the project’s guarantor and school psychologist. Teachers can use the methodological learning book which contains the whole plan for working with children. Pupils and teachers work with pictures and cards which depict a specific emotion or situation that needs to be solved, and also the steps for how to do it.

According to Gajdošová, the results of the project are positive. For example, children who had refused to communicate started to integrate into the group and to talk more about themselves, while hyperactive children got calmer and less aggressive.

“We will monitor these schools also over the following years to observe the long-term development,” Gajdošová said, as quoted by SITA.