Though Slovakia has not been historically known as a nation of start-ups, Slovak projects have received increasing attention over the past few years and the community has been growing since 2010. Even Slovak President Andrej Kiska supported start-up entrepreneurs during his late September visit to the United States, opening a new business incubator called the Slovak American Innovation Center in San Diego. 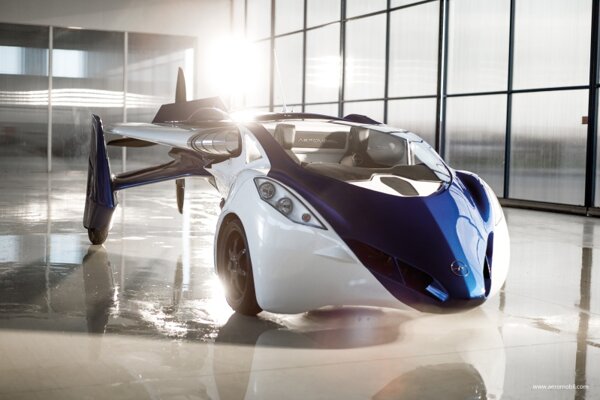 On October 29 in Vienna, two Slovaks, Štefan Klein and Juraj Vaculík, presented their aeromobile 3.0, a combination of a car and a plane. (Source: Courtesy of AeroMobil)
Font size:A-|A+0

Though Slovakia has not been historically known as a nation of start-ups, Slovak projects have received increasing attention over the past few years and the community has been growing since 2010. Even Slovak President Andrej Kiska supported start-up entrepreneurs during his late September visit to the United States, opening a new business incubator called the Slovak American Innovation Center in San Diego.

“There are many talented and clever people in Slovakia, but people sometimes need assistance with premises and ideas at the beginning,” said Kiska, who was once a businessman as well, as quoted by the TASR newswire.

Recently, several co-working spaces were created such as the Spot, Connect Coworking or BrainHouse. Also funds helping start-ups launched, for example, Fund of Innovation and Technologies or J&T Ventures. Entrepreneurs have wide opportunities to participate in competitions like Business Idea of the Year or the StartupAwards.

The Slovak start-up ecosystem has also already produced successful start-ups such as M.dot application for creating web pages, which was bought by the American firm GoDaddy for $15 million in early 2013. The quality of workers is high and the business environment is getting better; therefore, Slovak Business Agency (SBA) expects to see more big success stories in the coming years, the Slovak Business Agency spokeswoman Dominika Bizíková told The Slovak Spectator.

“There are more and more ambitious founders around, many professionals are joining and willing to ditch the safety of corporate jobs for the thrill of start-ups,” The Spot coworking space and business incubator founder Ivan Debnár told The Slovak Spectator. “This development results in and brings more mature ideas, and start-ups are gradually improving in terms of problems they are approaching.”

The Slovak start-up ecosystem is, however, still in the embryonic stage. Though half of young Slovaks are convinced that they are capable of starting their own business, just 16 percent plan to try it, according to KPMG’s Start-up Survey 2013.

Soon after the decision to start a company is made the first hurdles appear. The Slovak market is small, legislation rigid and there is lack of angel investors so it is not surprising that just one-third of start-ups succeed to draw external funds and 64 percent of those get less than €50,000, according to a study.

According to KPMG, the typical Slovak start-up is aimed at the international market (75 percent) and focused on software as a service (38 percent). Just 7 percent of start-ups raised external finances exceeding €500,000 and 29 percent raised between €100,000 and €500,000. The most successful start-ups remain in the hands of their founders in 77 percent of cases, while the international average is 54 percent.

The entrepreneurial environment still produces many challenges for start-ups and changes in legislation have not helped. For instance, it is really difficult to become a VAT registered subject and it has gotten more expensive to hire and fire people, according to Debnár.

Currently, there is no suitable business form to facilitate the incorporation process with protection of investors, founders’ relations, and motivating early-employees, he added.

“Consequently, it complicates founding of the start-ups in Slovakia,” Debnár said. “However, it can be viewed as a benefit on the other hand – it forces start-ups to go global early on.”

The government has promised to support the further development of the start-up ecosystem by decreasing the burden of initial business risks of innovative start-ups. The priority is to make starting start-ups easier and improve cooperation between investors and start-ups, as well as access to mentoring services, according to the Finance Ministry.

The Finance Ministry also says it plans to run campaigns to decrease citizen aversion towards big incomes and fear of business failure.

“There is still deeply rooted perception of failure in business as a total fiasco or loss here,” said Peter Gažík of Neulogy, a business consulting firm, “while precisely this failure is generally considered a necessary experience in the start-up segment.”

Some improvements have already been made. In 2014, these include the introduction of electronic VAT ledgers, the tax office’s binding statements clarifying tax law interpretation and the Financial Administration’s improved call centre. In 2015, the time limit for the registration of domestic taxable person will decrease from 30 days to 21 days, according to the Finance Ministry. The cabinet also approved the possibility to set up a business with share capital of €1 as of 2015.

Moreover, in September 2014 the first start-up accelerator came to Slovakia thanks to the CEED Tech, a consortium of five Central and Eastern Europe incubators including The Spot. They plan to invest €5 million into 50 start-ups in CEE in exchange for up to 10-percent share in those firms.

“We are happy that start-ups have started to receive big attention in Slovakia,” Jozef Žemla, co-founder of CulCharge, told The Slovak Spectator, “and that environment which allows capable people to establish their more courageous ideas and transform them in a more real form is being created.”