FEEDING on voters’ frustration with traditional parties, independent candidates led the way in municipal races on November 15, taking some 38 percent of the mayoral seats across the country. Bratislava went to an independent candidate, Ivo Nesrovnal, who in a closely watched race defeated the incumbent Smer-backed independent Milan Ftáčnik, and Milan Kňažko, who also ran as an independent backed by a number of opposition parties. 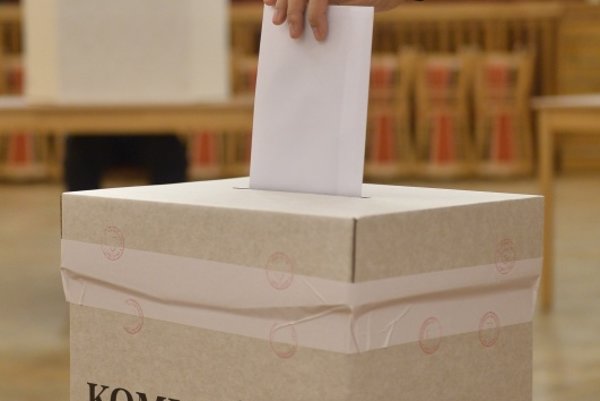 Independents may have success in the elections. (Source: TASR)
Font size:A-|A+  Comments disabled

FEEDING on voters’ frustration with traditional parties, independent candidates led the way in municipal races on November 15, taking some 38 percent of the mayoral seats across the country. Bratislava went to an independent candidate, Ivo Nesrovnal, who in a closely watched race defeated the incumbent Smer-backed independent Milan Ftáčnik, and Milan Kňažko, who also ran as an independent backed by a number of opposition parties.

Nevertheless, Prime Minister Robert Fico’s Smer party, as well as the opposition, clamoured to claim success of their own in a vote that 48.34 percent of eligible voters took part.

“Independent candidates were successful because voters are disappointed with the functioning of political parties,” Pavel Haulík of the MVK polling agency told The Slovak Spectator.

While, the position of independent candidates has strengthened compared to the previous elections, Grigorij Mesežnikov, president of the Institute for Public Affairs (IVO), suggests that they have been significant elements of the elected mayors and local deputies since the early 1990s. Mesežnikov attributes this development to technicalities of the electoral system, which makes it possible for the independent candidates to run, while in parliamentary elections the candidates cannot run without partisan support.

“There is a higher level of engagement on the part of the independent candidates [in the municipal elections],” Mesežnikov told The Slovak Spectator.

Yet, the most notable event of the election night on November 15 was the resignation of Speaker of Parliament Pavol Paška on the heels of protests and calls by the opposition which linked the Smer strongman to a dubious purchase of a computer tomography (CT) device.

Of the opposition parties, the Christian Democratic Movement (KDH) picked up the most: 122 mayoral posts or 4.19 percent, while the Party of the Hungarian Community (SMK) will control 107 mayoral seats, 3.67 percent. The candidates of the ethnic reconciliation party Most-Híd were successful in 87 municipalities or 2.99 percent and Sieť will have 52 mayors or 1.78 percent in the next four years, according to official election results.

The coalition of Smer and KDH gained 2.33 percent of all mayoral seats in Slovakia, according to TASR newswire.

Out of eight regional capitals, four mayors kept their positions: in Košice, Žilina, Trenčín and Nitra. Candidates who ran for Smer or in coalition with other parties won in Košice, Žilina, Banská Bystrica and Nitra. Independent candidates won mayoral posts in Bratislava, Trenčín and Trnava, while a coalition of right-wing parties took the mayoral position in Prešov.

Mesežnikov noted that the share of independent candidates did not strengthen at the expense of all the parties to the same degree, suggesting that the current opposition parties have suffered the greatest loss due to the trend.

“There wasn’t only a lower trust in established political parties as such, but the voters mostly punished the centre-to-right parties,” Mesežnikov told The Slovak Spectator.

Smer strengthened its position while the right-wing parties suffered a debacle, Fico said of the election results, adding that his party had set the goal to “strengthen the party’s position in municipal structures. I can say with great satisfaction that we delivered on this”.

As for the success of independent candidates, Fico said that this did not catch him by surprise, suggesting that elections are different at the local level.

As far as Smer is concerned, the better result in comparison with the previous elections could have been linked to what Mesežnikov calls the crony model: “before the elections a strong signal was sent out, that if you support our candidate, then there are larger possibilities to make solutions for your local problems more successful and that the government could give preference to such candidates”.

“The opposition parties of course do not have such possibility,” said Mesežnikov, adding that even if this could have also contributed to their weaker results the main reason is the situation in these parties. “After the election defeat in 2012, the centre-to right opposition parties have been for more than two years arena of internal partisan fights also among the parties itself these relations are complicated and there are conflicts within the parties,” he added.

While commenting on the success of independent candidates Figeľ took a rather cautious stance, suggesting that many take refugee under the brand of being independent to achieve something or to be viewed “somewhere in the middle between the Left and the Right” many interpreting it as a “display of the instability of the political environment”.

Most-Híd called the election results a challenge and chairman Béla Bugár said his party needs to come up with effective ways of cooperation with successful independent candidates. He also deemed the result a success.

Haulík nevertheless says that the traditional parties are getting exhausted.

“There are always the same faces, they do not draw consequences from their mistaken steps; they do not offer new solutions,” Haulík said, adding that this degree of dissatisfaction reached the limit, where the voter said “it is better to have an independent candidate than a problematic partisan candidate”.

Nevertheless, the voters are not disappearing there is only a certain regrouping according to Mesežnikov. He noted that representative polls, namely the most recent election preferences published by Polis, show that the total support for centre-to-right parties is higher, “which of course does not mean that they will all make it to parliament”.

“I admit, I expected a little higher turnout, something over 50 percent also due to the fact that before the elections, there was an effort to mobilise those voters through national issues,” he said, adding that for example there were protests against Paška, the speaker of parliament who eventually stepped down during the election night.