ONE of the ruling Smer party’s key strongmen, Pavol Paška, resigned as speaker of parliament the same night as municipal elections, overshadowing reports on outcomes of mayoral races across Slovakia. Paška’s departure came on the heels of two rallies fuelled by anger at a widely criticised tender for an overpriced computer tomography (CT) device set for purchase by a financially ailing hospital. 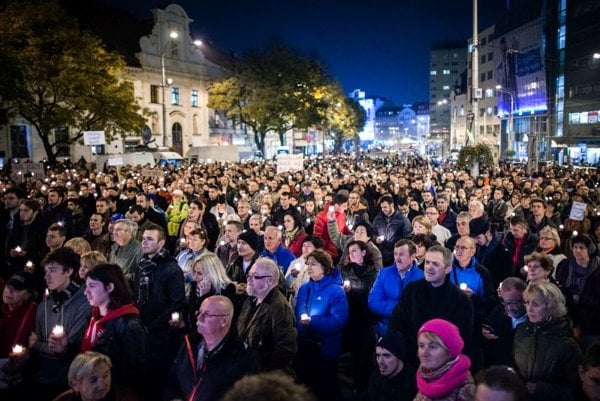 ONE of the ruling Smer party’s key strongmen, Pavol Paška, resigned as speaker of parliament the same night as municipal elections, overshadowing reports on outcomes of mayoral races across Slovakia. Paška’s departure came on the heels of two rallies fuelled by anger at a widely criticised tender for an overpriced computer tomography (CT) device set for purchase by a financially ailing hospital.

Prime Minister Robert Fico, who has been backing Paška since the outburst of the CT scandal, said he would look for a new speaker, the country’s third highest constitutional representative, among his ministers and would name somebody to the post on November 25.

While local media has been speculating about who could replace Paška, Fico panned the journalists for doing so, according to the TASR newswire.

“I care about this city, I care about Slovakia and I have had enough,” said Paška who has been in hot water for alleged links to the firm Medical Group SK, which won the dubious CT tender, shortly after it was clear that the Smer candidate took the mayoral race in Košice on November 15.

The opposition had declared earlier in November the mayoral election in Košice, Slovakia’s second biggest city, to be a referendum on Paška claiming that Smer’s candidate and former health minister Richard Raši was merely a Paška stooge. Incumbent Raši defeated his challenger Rudolf Bauer, who was backed by a number of opposition parties.

The scandal surrounding the CT device has claimed several senior heads already. Fico called on Smer nominee Zuzana Zvolenská to resign from the post of health minister and Renáta Zmajkovičová, a key Smer official, who sat at the top of the hospital’s supervisory board, stepped down as parliamentary deputy speaker.

“The resignation of Paška was certainly a surprise,” Institute for Public Affairs President Grigorij Mesežnikov told The Slovak Spectator when asked about the most noted development of the municipal elections, adding that the case must be seen through the context of elections because the opposition was trying to present the Košice vote as a referendum against Smer and Paška. “Even if the referendum did not work out, the opposition managed to stop Paška,” he added.

While Fico called Paška’s decision the gesture of a statesman, which is rare in Slovakia, opposition MP Daniel Lipšic claims that the CT scandal must not end with resignations only, but it also should continue at a level of criminal responsibility, TASR wrote. Paška has already sued Lipšic for his claims on Paška’s influence over the health-care sector.

Nevertheless, Fico, who claims that Paška resigned to protect his family, does not see the resignation of his right-hand man as his end in politics.

“Pavol Paška is my friend and I view his decision very sensitively,” Fico has said, adding that he counts on Paška continuing to contribute to the Smer party.

The opposition had tried to oust Paška on November 10, citing what they say are his ties to medical companies, especially the Medical Group, which won the CT tender. They also claimed that Paška did not publish his income from the sales of shares in private companies but ultimately Paška did not face a no-confidence vote after Smer MPs refused to support the programme of the special session initiated by the opposition.

The winning bid by Medical Group SK at almost €1.6 million for a Philips Ingenuity Core 128 CT scanner was €600,000 higher than the CT device from the cancelled tender, the Sme daily reported. At the time of the deal, Zmajkovičová headed the hospital’s supervisory board.

The leadership of the hospital announced on November 6 that they are seeking ways to cancel the contract with Medical Group SK. Yet, director of the hospital Mária Domčeková in an interview with Sme on November 12, insisted that the purchase came after a legitimate tender.