THE PARTY that dominated the Slovak political scene for a decade after 1998 has lost practically all its emblematic faces, has no deputy chairpersons, no parliamentary caucus, and its prospects continue to dim. 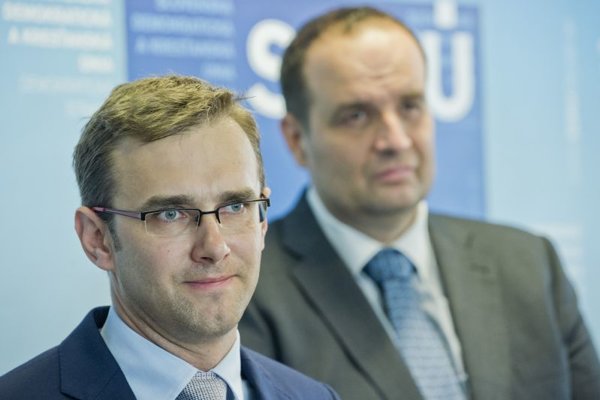 THE PARTY that dominated the Slovak political scene for a decade after 1998 has lost practically all its emblematic faces, has no deputy chairpersons, no parliamentary caucus, and its prospects continue to dim.

The Slovak Democratic and Christian Union (SDKÚ) stood at the helm of the post-1998 reformist movement, which helped direct Slovakia back onto the path to the Euro-Atlantic structures. In 2010 it still managed to control the prime-ministerial chair, when Iveta Radičová led the coalition of four centre-right parties, but her government only survived for one and a half years. Since then, the party’s decline in popularity charts has been remarkably sharp, particularly after the Gorilla scandal prior to the 2012 elections, which saw SDKÚ just barely cross the 5-percent threshold to get into parliament.

Opinion polls from November 2014 suggest the party, now led by Pavol Frešo, might not be that lucky next time. Meanwhile, the exodus of its members continues.

A recent poll by the Polis agency that was carried out in mid-November placed SDKÚ with just 3 percent support. Smer would win the elections with 36.9 percent, while Sieť, the Christian Democratic Movement (KDH), Most-Híd, the Ordinary People and Independent Personalities (OĽaNO), and the Party of Hungarian Community (SMK), would make it to the parliament too.

Another poll, by the MVK polling agency, polled SDKÚ at 3.9 percent of the vote, an equal result to the nationalist SNS. In that poll from early November, Smer would have gotten 38.8 percent, followed by KDH, Sieť, OĽaNO, and Most-Híd.

After the November 15 municipal elections SDKÚ has lost 100 mayoral posts in comparison to the previous term, according to the Sme daily reports.

While Prime Minister Robert Fico called the results of the right-leaning parties, including SDKÚ, in the municipal elections a debacle, the SDKÚ officials see them as a sign that “the mood in the society is changing”, and that Smer is losing its appeal. They see the problem in the fact that the opposition parties were unable to use this trend to their advantage, and instead independent candidates benefited.

It is not only voters, but also people within the party who are negative about developments in SDKÚ, however.

On November 19, the former deputy chair of SDKÚ, ex-defence minister Martin Fedor, announced he was leaving the party.

“I joined this party because it was a hope for Slovakia, as well as the guarantee of modernising, responsible politics,” Fedor told journalists upon announcing his decision, as quoted by the SITA newswire. “It’s not the same party any more”.

Fedor also quit the party’s parliamentary caucus, leaving it with fewer than eight members, which according to the parliamentary rules of order means the caucus will cease to exist. He will act as an independent MP.

What some observers have called the dissolution of the party was sped up after the SDKÚ’s extraordinary congress in September, where an unsuccessful attempt was made to oust chairman Pavol Frešo. In response to that, three deputy chairmen (Fedor, Viliam Novotný, and Ivan Štefanec) along with the SDKÚ treasurer and general secretary resigned.

Several prominent members have left the party throughout the past year. The first threat to the existence of the party’s caucus came when former two-time prime minister Mikuláš Dzurinda and his right-hand man Ivan Mikloš departed in June 2014 due to what they called the failure of the new leadership to rejuvenate what was once the country’s strongest right-wing party.

They also cited dissatisfaction with the course the party has taken since 2012, when Frešo took over from Dzurinda. Eventually they agreed to remain members of the caucus.

The regional structures of the party have reportedly recorded a drop in membership too, with some former SDKÚ members jumping ship to Sieť, according to SITA.

Fedor’s recent departure might not be the last one, the TASR newswire suggested, as it reported that part of the Bratislava members are considering leaving too.

“Several SDKÚ members have a breakaway plan,” a source from inside the party told TASR.

Frešo summoned a party presidium for November 20. Most regional chairpersons asked for it more than a month ago. The agenda of the presidium is not known so far.

Several regional chairs met already on November 18, and they plan to attend the presidium despite not knowing what is to be discussed.

In the wake of the municipal election results and the resignation of Pavol Paška from the post of speaker of parliament, SDKÚ tried to revive its position of the centre-right leader from more than a decade ago, and called for a broader coalition to be formed to defeat Smer, similar to the Slovak Democratic Coalition (SDK) which helped bring down the government of Vladimír Mečiar in 1998.

“There is a need for a democratic coalition that would offer an alternative to Fico,” SDKÚ caucus chair Ľudovít Kaník said at a November 18 press conference.

Frešo said he believes the results of the municipal elections showed that when the centre-right parties unite, they are able to defeat Smer.

Representatives of other centre-right parties dismissed the idea of a democratic coalition, with the KDH and Most-Híd, former partners of SDKÚ within the People’s Platform, saying that SDKÚ should first put its own situation in order.

Politicians from newer parties, like OĽaNO, NOVA, or Sieť, showed no interest in allying with SDKÚ either, and suggested that SDKÚ’s role in the Slovak political scene has come to its end.