WHILE customers are enjoying low food prices and retail chains say Russian sanctions targeting EU produce are having little effect on their businesses, producers claim a glut of goods on the market are harming their bottom line. 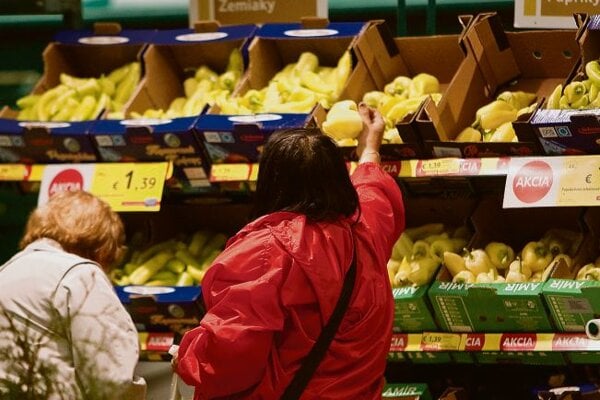 WHILE customers are enjoying low food prices and retail chains say Russian sanctions targeting EU produce are having little effect on their businesses, producers claim a glut of goods on the market are harming their bottom line.

After Russia banned most EU produce on August 7, some European farmers had to find another market for their goods. In trying to sell their products on the EU’s internal market, including in Slovakia, the increased supply drove down prices and profits for Slovak growers.

“This is not equal competition and therefore they can go low with the price under our production expenses using so-called price dumping,” Fruit Producers Union’s head Marián Varga, who is also Plantex fruit producer representative told The Slovak Spectator.

Sanctions decreased the prices of apples as well as pork meat and Agriculture and Rural Development Ministry also expects the fluctuation of prices in the milk production sector, the ministry’s spokesman Peter Hajnala told The Slovak Spectator.

Agriculture Minister Ľubomír Jahnátek also blamed retail chains for using this situation to push prices down. Moreover, the bumper harvest of fruit, vegetables and potatoes in EU countries complicates the situation of farmers as well, the Pravda daily reported on October 16.

Supermarket chains, however, dismiss any claims they are to blame and insist they have merely stuck to existing contracts with suppliers, according to Milan Kisztner, spokesman for the Slovak Alliance of Modern Commerce (SAMO), a group that includes chains like Billa, Kaufland, Lidl, Tesco and Metro.

“Retail chains, which are members of SAMO, operate on the basis of supply-receive contracts in their commerce relationships which secure continuity and consistent quality of supplies of goods to the shop shelves,” Kisztner told The Slovak Spectator. “This is the reason why we have not recorded any significant changes in goods structure on our shelves due to Russian sanctions until now.”

The direct negative effects of the EU-Russia sanctions on Slovakia’s agricultural sector have reached €6.2 million, according to Agriculture Ministry’s report submitted together with measures on how to mitigate them to interdepartmental review in September. The report is based on the statistics of Slovakia-Russia trade in 2013, when Slovak exports from the agriculture sector reached €31 million, the TASR newswire reported on September 26.

For example, losses in the amount of €2.3 million were reported by companies Rajo Bratislava, Senoble Zvolen and Gemermilk Rimavská Sobota.

“We have 250 tonnes of powdered milk, which is currently unprofitable to sell, at our stores,” Martin Užík of Gemermilk said, as quoted by Hospodárske Noviny on September 29.

“We [Plantex] have laid off around 20 percent of people and we will liquidate even some farms in the next year,” Varga told the Sme daily on August 20. Neighbouring Poland is the world’s largest apple exporter.

Pork producers are selling their products for a price 18 percent lower in comparison with 2013, which could result in €10 million in losses by the end of the year, Pig Farmers Union head Andrej Imrich told Pravda.

The decrease in the prices of food products is a worldwide trend, as the monthly food price index of Food and Agriculture Organization of the UN (FAO) registered another drop in August, continuing a five-month downward run and reaching its lowest level since September 2010, according to FAO webpage.

Retail chains are willing to cooperate with Slovak producers who can guarantee quality for a good price on a long term basis, Kisztner said, even though current legislation does not allow signing contracts between retail chains and suppliers for periods longer than three months.

As far as such relationships work in the long term and sold products fulfil demanded parameters as well as customers’ expectations, there is no need for short-term changes in those relationships due to the loss of the Russian market. The same is true even after the expiration of a contract with particular supplier, according to Kisztner.

“We sell both Slovak and non-Slovak apples and we have not changed the way we buy them or the sources from which we buy them in any way,” Tesco Senior Executive Martin Dlouhý told The Slovak Spectator.

According to the Agriculture Ministry, sanctions even hit vegetable producers as the prices on carrots and cabbage dropped, but producers are not sure whether falling prices on vegetables are the result of Russian sanctions, Hospodárske Noviny reported.

For example, Juraj Mačaj of the Agromačaj company said that the price of carrots has been decreasing for several years because of increased competition from Poland. It is natural that retail chains use this situation to their advantage. Miroslav Sudický, director of Vita - Zel vegetables producer, agreed.

“I can resolutely state that I have not experienced extortion from the retail chains,” Sudický told Hospodárske Noviny.

What is Slovak food?

In its press release SAMO further pointed out that fear of inexpensive apples from other EU countries, especially Poland, has proved to be unjustified. The share in total sales of Slovak apples has actually increased because of a bumper harvest. In August, 51.4 percent of apples sold by SAMO members were Slovak, and in September the share was 60 percent.

“We are aware that sanctions of the Russian Federation and the bumper apple harvest put Slovak producers in a complicated situation,” Kisztner said. “The current situation in our retail chains, however, proves that fair cooperation with suppliers is a priority for us.”

A study by the Agriculture Ministry published in mid-August supports SAMO’s claims, showing that the share of incomes for sold Slovak food of the biggest retail chains was higher than 63 percent of income on all food products.

On the other hand, Varga is sceptical about such numbers and claims that many of the apples which appear to be Slovak were likely grown somewhere else before they entered the Slovak market. Slovakia produces less than 50,000 tonnes of apples, while retail chains officially sell around 100,000 tonnes of Slovak apples, he said.

Similarly Slovak poultry producers claim that it is not possible to say that 85.8 percent of poultry sold in retail chains is Slovak, when local farmers can produce amounts totalling 50 percent of what is consumed in Slovakia, Pravda reported on August 28.

“The methodology varies and none of them are perfect,” Renáta Filipčíková of Billa told the Pravda daily. “We leave this question to competent bodies since we do not have the capacities nor the competences for precise control of poultry farms.”

Dealing with the situation

If the Russian ban continues and the European Commission does not adapt, sanctions could significantly harm Slovak production of fruit, vegetables, pork and beef, which would result in decreasing the country’s food sovereignty, according to Hajnala.

Prime Minister Robert Fico said in August that the government has approved measures aimed at boosting official checks on each part of the food chain in order to minimise any negative economic impacts on Slovak farmers and food producers, TASR reported.

Another risk is poor food quality. Even though this food originally may have been good quality, as exporters were unable to sell it in Russia, it remained in their warehouses for some time and some businessmen might be tempted to put it in a different packaging to camouflage expiration dates, according to the report of the Agriculture Ministry.

The ministry therefore asked for a special allocation of €827,790 from the state budget for intensified food inspections and is planning to spend €72,000 to purchase official cars for food inspectors, the SITA wrote on October 12.

When delivering the opening speech at Agrokomplex, the international agriculture and food fair that opened in Nitra on August 21, Fico also said that Slovakia will demand compensation for farmers’ losses.

“We’ll demand compensation for the loss of export markets and the fall in prices due to excessive levels of foodstuffs on the European market,” Fico said, as quoted by TASR.

Fico’s idea is not bad, but it will not change the situation significantly since EU compensations will probably miss real fruit producers and will go to various speculators, according to Varga.

“[Fico] says that and declares that but I know that after all it won’t help us, even though there is good intention,” he said.