THE INTERNATIONAL Festival of Contemporary Dance Bratislava in Movement / Bratislava v pohybe offered an insight into where this genre is heading, and it seems that the prevailing feature is physical theatre and the fusion of different forms and genres that jointly create a homogenous whole that keeps surprising audiences. 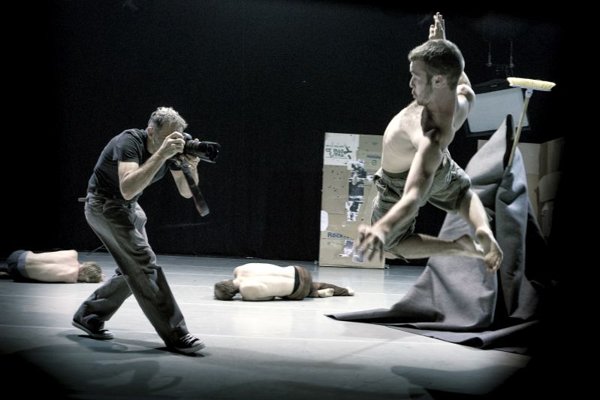 THE INTERNATIONAL Festival of Contemporary Dance Bratislava in Movement / Bratislava v pohybe offered an insight into where this genre is heading, and it seems that the prevailing feature is physical theatre and the fusion of different forms and genres that jointly create a homogenous whole that keeps surprising audiences.

During three weekends in October 2014, the festival showed 26 performances of ensembles from Belgium, the Czech Republic, Israel, Hungary, Norway, Spain and Slovakia.

They were staged in four venues, including the Slovak National Theatre (SND). There, on October 10, the festival opened with a piece recently premiered there, The Tempest – a work composed of three views on Shakespeare’s classics (by Slovak dancers/choreographers Jaro Viňarský, Stanislava Vlčeková and Andrej Petrovič), selecting three different aspects and offering three different, individualistic perceptions.

The famous troupe of progressive Belgian choreographer Wim Vandekeybus returned after last year’s successful production of a remake of his first piece, What the Body Does Not Remember. This time round, his booty Looting filled the big SND hall.

The recent piece combines dance, movement, music, talking and photography in a fine balance, keeping the audiences thrilled and tensed up over what could come next. The photographs made by Danny Willems are shown “in live broadcast” and co-create the whole performance, made to the music performed – also live – by Elko Blijweert.

It is difficult to describe the flow of words, thoughts, images, music, light, illusions, and ideas, but maybe the words of choreographer/director Wim Vandekeybus can help a bit: “Memories are often created or distorted on the basis of photographs. Proust once accused the visual memory of actually erasing memories. Taste and touch are much more sensitive, but the visual is dominant. Which is why you can remember things you have never experienced perfectly well, simply because you have seen pictures of them.”

On October 17, the packed SND building watched a breath-taking story of memo-ries, the past, their distortion, and the pretentious role of photographs which pretend to capture the moment – and sometimes only help fabricate it. booty Looting is a choreography for six dancers, one musician and one photographer, but the usually clear lines overlap and get blurred, totally disappearing at times. The piece can make viewers laugh, shiver, cry, apprehend, or shake their heads in disbelief, watching “plundering: the plundering of what has already been plundered, stealing what was already stolen, looting the booty”.

“booty Looting is a highly individual piece,” Wim Vandekeybus writes on the company's web site, Ultima Vez. “The audience will have to get involved and will have to imagine things. And who knows, it may itself occasionally feel it has been robbed.”

Vandekeybus founded Ultima Vez in 1987 and since then, he and his company have received the Bessie Award (New York Dance and Performance Award), created 30 productions and film works, and hava been constantly striving to find new artistic speech, forms of expression, new directions, crossing the borders he himself has set, as well as those of the world of dance.

Another performance that focused on the body and its expression forms was the Paved Life of the Elledanse company, played on October 18 in the eponymous theatre. Paved Life taps the environment humans live in the 21st century – not just the physical one which defines the physical limits of our lives, but also the mental set, the system of rules that govern our coexistence with others. The dancers can explore one single exception: group improvisation exercise can encourage them to research not just their own body and its possibilities, but also to interact with other dancers in a way unprecedented in the Western world.

Unfortunately, this interesting piece choreographed for five dancers by Israeli Rotem Tashach includes a lot of texts and explanatory monologues and dialogues, so it may be more difficult for non-Slovak speakers to grasp what it is about.

The foreign productions, as well as the workshops and lectures, were a one-time chance for Slovak audiences, while the domestic pieces can be still seen throughout the 2014/2015 season. Some of the accompanying events, including: the YouMake Remake funny video/dance compilation by Israeli Renana Raz, The Imago performance by Lucia Kašiarová, or Deliberate Waiting by the Company Late Harvest / Neskroý zber can still be seen later in the theatre season at some venues in Bratislava (or elsewhere in Slovakia).