THE LIST of National Cultural Monuments in Slovakia was enhanced by one item in 2014: the calvary in Nitrianske pravno. 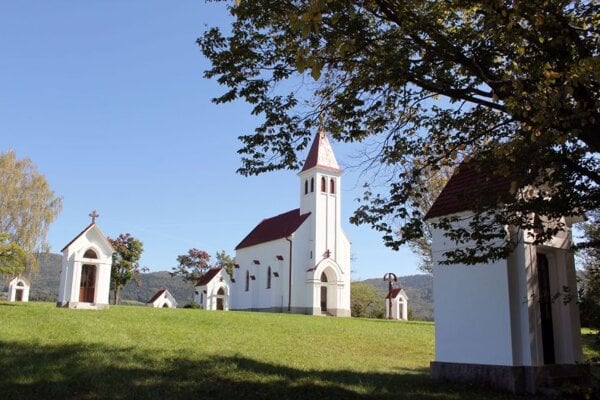 The church and some of the chapels of the Nitrianske Pravno Calvary. (Source: TASR)
Font size:A-|A+

THE LIST of National Cultural Monuments in Slovakia was enhanced by one item in 2014: the calvary in Nitrianske pravno.

It was built in in 1934 and 1937 in the neo-Gothic style on the hillock called Galgensberg, overlooking the former separate municipality of Solka in two phases. The interesting fact is that it consists of 27 brick buildings: two churches (in the beginning and in the end), 14 traditional stops of the Way of the Cross, or Via Dolorosa, and 11 more chapels.

“The initiator and founder of the calvary was a local native, canon of the Banská Bystrica chapter, Anton Richter. The stimulus for the building of the calvary was a worship commemoration and paying tribute to the 100th anniversary of a tragic fire from 1827 in which a big part of the town burnt to ashes,” he said. The preparations took several years, and Richter ordered the Munich-based company Franz Mayer to construct the calvary and also to arrange for paintings with Way of the Cross scenes. Banská Bystrica sculp-tor Karol Horn did the reliefs from Carrara marble.

“Inhabitants started the construction enthusiastically,” Michalovič said. Thus, more scenes from the Passion were added to the traditional stops of Via Dolorosa – like nowhere else in Slovakia.

After World War II when a big part of the German citizens had to evacuate their homes, the calvary started to decay.

The first big reconstruction was in the 1990s, but after 20 years, the calvary needed to be repaired again. In 2013 they repaired the roofs, and this year, façades of all the buildings were reconstructed, with the expenses at €18,000. One third was paid by expats whose parents built the local calvary, and the rest was financed from a public collection.