Memorial plaque for Tsar Peter the Great unveiled in the capital

IN 1698, Russian Tsar Peter the Great visited the current Slovak capital Bratislava, then called Pressburg or Pozsony, during his long tour around Europe. To commemorate this event, a memorial board was placed on the main building of the Slovak National Museum (SNM) in Vajanského nábrežie on October 16. 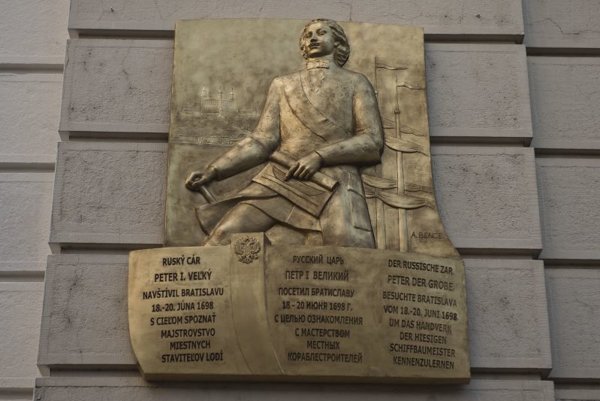 IN 1698, Russian Tsar Peter the Great visited the current Slovak capital Bratislava, then called Pressburg or Pozsony, during his long tour around Europe. To commemorate this event, a memorial board was placed on the main building of the Slovak National Museum (SNM) in Vajanského nábrežie on October 16.

Head of the SNM Vladimír Jasaň explained that when Peter the Great arrived, the Bratislava harbour was on the level of the Vydrica borough, and as this area is now re-developed, they addressed the investors who are even considering naming a square there after the Tsar.

Peter I belongs among the outstanding personalities that visited Bratislava, and his stay was a matter of study: he oversaw the construction of boats, and this makes it even more interesting to commemorate, according to the SITA newswire.

The unveiling of the memorial board was just one in a series of events called “Peter the Great Returns to Bratislava” that included also an exhibition and a concert by a Moscow military school.

The memorial plaque made by Alexander Bence was co-funded by the Russian Culture Fund led by world-renowned director Nikita S. Mikhalkov who personally attended the unveiling, the Russian Centre for Science and Culture (RCVK) informed on its webpage.

Peter the Great visited Pressburg as part of his 500-day journey around Europe that included stops in England, the Netherlands and Austria, historian Miroslav Daniš of Comenius University told TASR.

According to him, Peter meant to study the Danube fleet in Pressburg during his two-day stay, from June 18-20, 1698, which was abruptly shortened due to a rebellion.

Peter was 26 and he sailed here from Vienna, where he had stopped on his way back from England.
Peter the Great considered Pressburg as a potential trade route for the Black Sea fleet and was interested in the harbour and the military ships built by the local ship-maker’s guild.

By the end of the 17th century, a novelty was constructed here: a ship with 11 cannons propelled by 40 oarsmen from the under-deck which was fast and manoeuverable.

The curiosity is that Tsar travelled incognito and was the guest of Count Ján Pálffy, the main imperial chamberlain and captain of the Pressburg harbour.