IT IS rather a cliché that music knows no geographical or language borders, and thus, musical cooperations, like those among visual artists, are quite common. 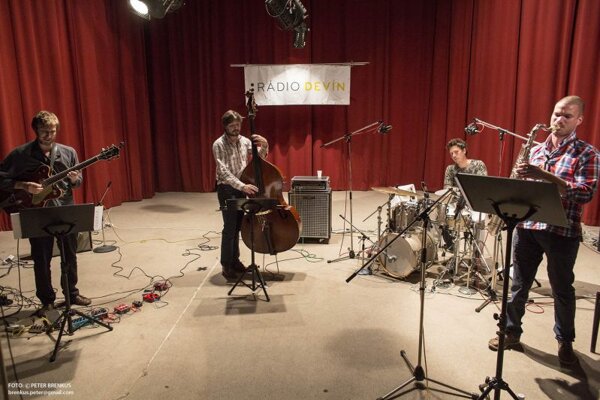 IT IS rather a cliché that music knows no geographical or language borders, and thus, musical cooperations, like those among visual artists, are quite common.

However, it may be also due to the bohemian and like-minded personalities of musicians, seen as free spirits, that such collaborations are of a one-time (or one-tour at best) character.

One exception that may only confirm the rule, though, is the Criss Cross Europe project that has been going on for several years already, combining musicians from Belgium, France, Luxembourg and Slovakia: each year with a different grouping.

After having rehearsed for a brief time (it is a jazz project and jazzmen are said to be able and willing to improvise and join forces quickly), they give concerts in all four of the countries mentioned, and in some editions of the project, especially if a bigger band is involved, even a recording may be released as a result.

“The project has been going on for six years already,” Mik Torfs of the Belgian JazzLab Series Centre told The Slovak Spectator at a concert on September 24 in the Slovak Radio building in Bratislava.

“It was just the idea of a musical blind date – one musician from each country – talented, good musicians who didn’t know each other,” he explained. “Give them four-five days of rehearsing and then send them on a tour around the countries.” He added that originally there were five countries involved (Slovakia joined only two years later).

Currently, there are the four already named, who are participating (with prospects of one Vienna-based and one Munich-based jazz club joining in). Musicians have a free hand in choosing what to play; but this changes if a bigger band gets involved. “The result is different every time, of course, because there are different temperaments involved,” Torfs summed up.

But there is a change planned: next year, a big band will be put together, with one artistic director hired to arrange them.

As for selection of artists, he said that they just look for young musicians, probably under 35, and in each country, the due partner organisation – Music:LX in Luxembourg, Music Centre Slovakia in Slovakia, Jazzlab Series in Belgium and Jazzus Productions in France – then chooses one performer to participate, without discussing the choice with the others. Torfs concluded that there are ongoing discussions between musicians, and so the first concert is usually quite different than the last one.

This year, Ruben Machtelinckx from Belgium (guitar), Nikolaj Nikitin from Slovakia (saxophone), Charly Vilmart from France (double bass) and Jeff Herr from Luxembourg (drums) played in Bratislava, in Ormes; near Reims, France in mid-October; in Abbaye de Neumünster in the capital of Luxembourg and again in Slovakia, at the Jazz FOR Sale festival in Košice, at the beginning of November. The last concert took place on November 26 in Gent, Belgium.

“I was selected by the jazz section of the Music Centre Slovakia – due to the composition of the band, they needed a saxophonist,” Nikitin said. “We rehearsed seven tunes in total: two composition from each of us, with the exception of the drummer, who got one.” He opined that for a small band, this is the best method, while a bigger musical body needs someone to coordinate and conduct them.

Nikitin said that each concert was different, from a big Slovak jazz festival in Košice, to a small jazz club in Ormes (which looked like a former farming-cooperative-turned-cultural-venue). In Luxembourg, the concert took place in a club where there are Sunday concerts, and in Bratislava, it was in a small studio of the Slovak Radio. The Slovak musician deemed the first concert “the most cautious and tentative, unfortunately”, complaining also about the long pauses between the concerts that makes jazzmen lose contact and the “common drive”.

Asked what was the project’s ultimate asset for him, Nikitin said that the interesting thing was to fine-tune the different styles and temperaments of the participants, “but we have found a common language and I think that we managed to create something new and interesting”.

He added that they found a concord and understanding also on the human level, in humour and mentioned even an ambition to meet outside the project – which is rather demanding, though, especially for him, as he lives 1,500 kilometres away. “But Jeff Herr from Luxembourg even proposed two concerts for next year, and I would be glad if we can make it,” Nikitin concluded.