SOME Slovak expats have found success and fame abroad, but some seem to be still drawn back home, at least from time to time. 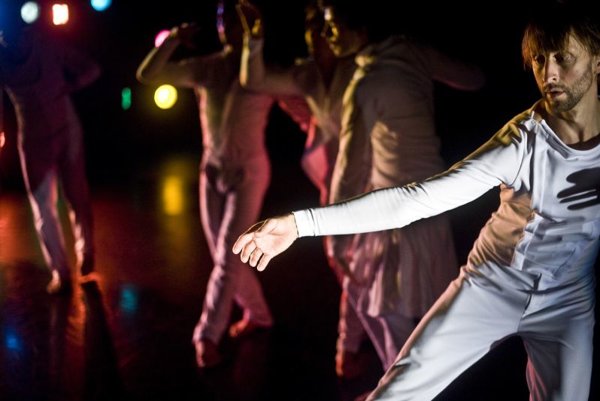 SOME Slovak expats have found success and fame abroad, but some seem to be still drawn back home, at least from time to time.

Les SlovaKs is a group of dancers/choreographers who live abroad, mostly in Belgium, and they have numerous individual projects and productions. However, they still seem to be somehow tied together, making a joint project/ choreography/piece together. Their third joint work, Fragments, had a Slovak premiere on November 15 at the historical building of the Slovak National Theatre (SND).

The solemn, high-tone milieu seemed a bit too dignified: first for the unusual music, based on 1950s’ and 1960s’ hits of Slovak Melánia Olláryová (as adapted and completed by long-time Les SlovaKs collaborator Simon Thierrée) and then also for the joyful, playful and sometimes even cheeky and provocative dance pieces by Milan Herich, Anton Lachký, Milan Tomášik, Peter Jaško and Martin Kilvady.

Contemporary dance is not a mainstream hit in Slovakia, and Fragments are what their name reveals – mere etudes without plot or common motif; but the dancers managed, be it individually or in a group, to capture the audience, make them relax, laugh, smile, reminiscence (also thanks to the retro music) and fully delve into the art of dance. All the way until the final applause that developed into a standing ovation.

The Fragments were staged as part of the project Koren(ie) súčasného slovenského tanca / Roots-Spices of Contemporary Slovak dance that strives to bring not just the works of domestic choreographers and dancers, but also of those who moved abroad to develop their talents there. (On November 25, the RootlessRoot company performed the piece Kireru, choreographed by Linda Kapetanea and Slovak Jozef Fruček.)

“The selection of music is fixed, which means it is the same all the time,” Le SlovaK Milan Tomášik answered for The Slovak Spectator. “Fragments is our third piece, and we had some typically Slovak element in each of them.” He added that in the previous one, Journey Home, they focused on Slovak folklore, and now on the music of Olláryová. “It sounds exotic for foreigners,” he continued, “so reactions are usually very good. People react similarly [as in Bratislava] – and thus, we are used to them applauding, laughing, etc. during performances.”

Tomášik said about the position and development of contemporary dance in western Europe that it has a much bigger tradition there, and thus the people who come to their performances are also much more diverse – from young people to pensioners. And there is also a strong middle-aged generation that regularly attends modern dance performances, usually with a season ticket.

It is hard to comment on Slovak audiences, he continued, as they do not live there anymore, but the few performances they gave here show that the circle of visitors has not expanded much. They are more or less colleagues, friends, insiders; and if older people come to watch the piece, these are usually relatives or close friends.

“The second difference in Belgium or France is that the social system is much more beneficial for artists and performers than elsewhere,” Tomášik concluded. “If, for example, someone gets the status of an artist – which is not easy – he or she receives financial support from the state also for the days when he does not work. And this makes a huge difference, doesn’t it?”