Connecting with the classics

IT IS difficult and challenging to evaluate art, but there are competitions that dare to tread on this thin ice – with the goal of exhibiting and promoting certain genres, styles or young artists. 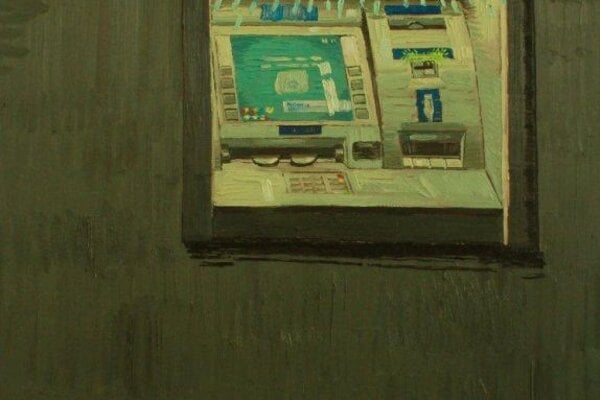 IT IS difficult and challenging to evaluate art, but there are competitions that dare to tread on this thin ice – with the goal of exhibiting and promoting certain genres, styles or young artists.

This year’s is the ninth version of the Maľba/Painting competition, and 20 artworks that have made it to the finals can be seen until December 21 in the Nedbalka gallery in downtown Bratislava.

Juraj Florek won the contest of this year. Jury member Jan Skřivánek told Sme he had already put Florek’s work called Night Teller Machine on the first place of a short list when selecting the 20 finalists from among nearly 100 contestants.

“If someone paints like van Gogh did, it is very tricky, and the result is usually kitsch,” one of the four members of the Painting 2014 jury, Jan Skřivánek told the Sme daily. “But with Florek, it all holds together. He works with this form, but his artworks are very up-to-date. His painting of the teller machine is a very interesting testimony of our world.”

Florek, a graduate from the Banská Bystrica Art Academy, selects for his paintings unattractive, ignored places and finds certain poetry in them.

“He has acquired a technique which is tricky, and combines it with banal city corners – a soda machine, the corner of a parking lot, the wall of a department store,” Skřivánek continued. “The painting of the teller machine, too, reminds me of the painting of a chair by van Gogh; it is a similarly banal motif, although it was a more radical step at the end of the 19th century to paint a chair than to paint a teller machine today. But there is a certain similarity – who would like to have a teller machine hanging on a wall today?”

It is a common city view on one hand, but Florek managed to shift it a bit further. “It is rather an altar of an unknown god than the portrait of a common routine of city environment,” says exhibition curator Alexandra Kusá.

Second place went to Matej Fabian with a large-sized motif of skiers – or are they ghosts?
“This painting surprised us in closer view,” Skřivánek said. “It is very sculpted, pasty, even a relief painting. It is a very good picture – already in how well he has mastered such a format.”

Nonetheless, the motif is important, according to Skřivánek. “It gives the viewer a disquieting, provoking impression; forcing them to react. And we were looking exactly for paintings that can activate people. With many of them, we said that they are well-mastered but somewhat academic: well-painted, but the artists does not risk and provoke.”

Third place went to András Cséfalvay who usually works with video, sound and music. This time, the music is present, but rather in a symbolic way. The painting shows two men in period clothing beating a third man, and the text overhead says: “Wolfgang, the music in your head is useless for us!”

“This is a conceptual approach towards painting that works with the important issue of the role of art in our life,” Skřivánek said. The work communicates with the history of modern painting, limits of the genre.

“The result is an intelligent picture that tests the limits of contemporary painting,” Kusá commented.

Work and its background

The exhibition of individual artists can be slightly confusing for people. The jury members also had at their disposal whole portfolios, so that they can evaluate if the competing painting is not a mere stroke of luck.

“When looking at a painting, it is always like this: one needs to put the work and its author into context,” Skřivánek says. “The idea that the work speaks for itself and that even a solitarily hanging original can win the awe of everybody is illusory. It is rather the other way round – strong artworks, expressive at a first sight, can absorb a person only for a brief moment, and then they get overlooked and ignored quickly. Good-quality art requires people to know more about it, and it is better if they struggle with it for a while before deciding and appreciating its quality.”

The exhibition, organised by the VÚB Foundation, is free in the Nedbalka Gallery on Nedbalova Street daily from 13:00 and 19:00, except Mondays, through December 21.