Postcard to the president

THIS nice colour postcard depicting the town of Ružomberok in the Liptov region stems from the times of monarchy; but as can be seen here its sender(s) crossed out the Hungarian name and left only the Slovak one. 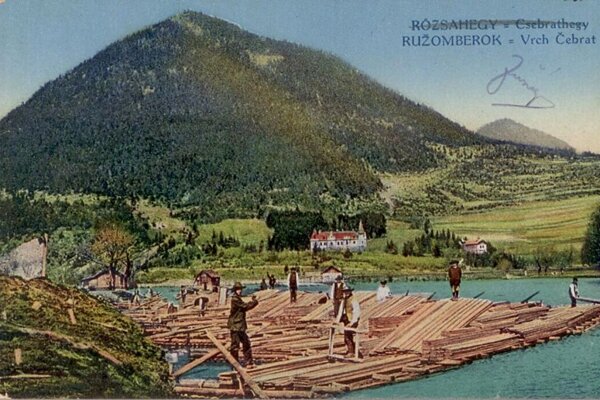 Frequently, this used to be done on postcards after the first Czechoslovak Republic came into existence.

It would be interesting to learn who sent this postcard, as it is addressed to none other than the first president of Czechoslovakia, Tomáš Garrigue Masaryk, at the Prague castle. With all probability, they belonged to the president’s close circle.

What the image offers is a matter of the past. As can be seen, across the Čebrať hill, on the bend of the Váh River, numerous rafts used to stand with workers. This is a famous raft harbour called Polík. Flat, gravelly areas lying close to embankments were selected for raft harbours. Carmen from valley stores used to bring wood meant for binding together – lashing, i.e. the making of rafts – and also wood bound for further processing at lumber mills.

It is worth remembering that due to the absolute lack of passable and safe roads, river transport was the only well-working means of movement in the Middle Ages. In Liptov, the first more or less passable road was built in 1364, as ordered by Louis the Great. Despite the effort of those in power to secure roads for the country, particularly wealthier people and merchants used rafts for transport until the beginning of the 20th century.

We know from old records, for example, that in 1656 Hungarian palatine Wesselényi sailed to a court session in Prešporok (today’s Bratislava) across the entire Liptov region all the way to Sereď, from where he continued on horseback. In 1758, Ružomberok mayor Juraj Rosinský rafted for the same purpose to Pest, using four rafts for transport. Even rich farmers and petty nobility from Liptov who participated in the great battle near Trenčín between the imperial army and Rákóczy’s rebelling units got to the site of the battle on rafts.