THE ASSOCIATION of travel journalists, the British Guild of Travel Writers (BGTW) made the Čachtice castle and the municipality of Čachtice a runner-up for their Best European Tourism Project. This locality in Trenčín region of western Slovakia was pronounced an exceptional tourism project and recommended to be visited. 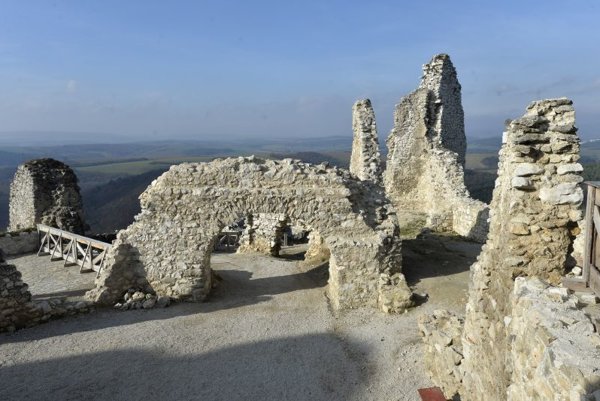 THE ASSOCIATION of travel journalists, the British Guild of Travel Writers (BGTW) made the Čachtice castle and the municipality of Čachtice a runner-up for their Best European Tourism Project. This locality in Trenčín region of western Slovakia was pronounced an exceptional tourism project and recommended to be visited.

The awards were handed out during a World Trade Market travel fair in London beginning November. Head of the Slovak Tourism Board (SACR) Martin Šebesta informed the TASR newswire that the castle and the village of Čachtice were nominated for the award by John Malathronas who visited them in July 2014. The informative goal of the trip was to present the system of watch-castles in the Považie region, including Čachtice.

Malathronas visited the former residence of Elisabeth Báthory, “the Bloody Countess”, the exhibition in Draškovič Mansion and the Church of St Ladislaus where the countess is allegedly buried. He also visited the underground rooms and ruins of the former mansion of the Nádasdy family, currently used by the local agricultural co-operative to store produced wine labelled, Báthory’s Blood.

The result of Malatronas’ trip was a story on the reputed travel website CNN Travel.

Čachtice Mayor Anna Ištoková told TASR that the nomination is a compliment for the work of all those who participated in the renewal and reconstruction of the local castle. She added that in spite of the big investment form the EU funds already made, this is just the first step towards its stabilisation.

Ištoková also said that the reconstruction increased the castle’s attractiveness for tourists, as typically, it has been visited by about 15,000 people per year; while since the re-opening after reconstruction, 80,000 visited between July and the end of tourist season.

Trenčín region hopes that the award can increase the attraction of the castle for tourists and help boost tourism. Next year, a regional tourism organisation shall be founded, aimed at boosting five exceptional features typical for this region: castles, distilleries and wineries, accommodation capacities along with gastronomy, spas and the building of cycling routes.

The BGWT has about 300 members including, professionals from media and travelling, journalists, photographers, publishers, editors, and others. They travel around the world, getting knowledge and experience about new, interesting projects in tourism. BGTW has been awarding special prizes for 30 years, with the winners coming form all over the world.