THE CIVIC association SOSNA tries to promote the construction of economical houses from available resources. By the end of October, it presented to the public another interesting building – after the construction of the Ekocentrum in Družstevná pri Hornáde near Košice. 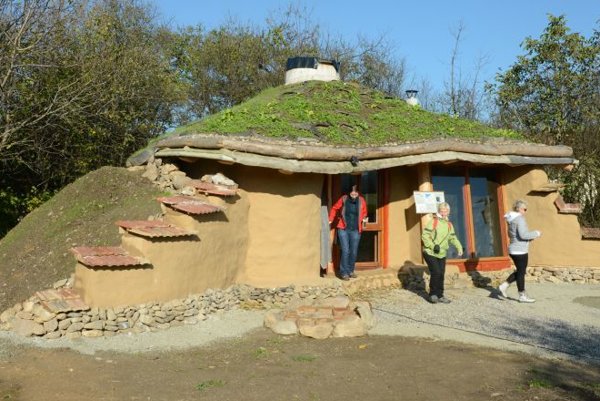 THE CIVIC association SOSNA tries to promote the construction of economical houses from available resources. By the end of October, it presented to the public another interesting building – after the construction of the Ekocentrum in Družstevná pri Hornáde near Košice.

This time, the house is built almost exclusively from local, natural and waste material and it is called Hobbit House. It was festively unveiled on October 25, during the Indian summer (Babie leto) festival in Družstevná pri Hornáde.

“While building it, we have been inspired by the thought of Mahátna Gandhi who said that a house should be built from material that can be obtained from within 29 kilometres,” Štefan Szabó of SOSNA told the SITA newswire. “We want to show, through this building, that a small house that is nice, healthy, comfortable and good – in the original sense of this word, can be built with one’s own hands, from local, freely accessible material.”

Szabó informed that the house has been built with earthbag technology, with walls built from bags filled with pounded clay which they obtained from the municipality as waste material. From the northern side, buried under clay, a secondary wall was built with the earthship technology from tyres – it serves to balance the pressure of soil on the walls. The construction is roofed with a so-called reciprocal roof, the supporting elements of which were made from round timber. Reciprocal roof, also known as Mandala roof, has been used since the 12th century in Chinese and Japanese architecture. Recently, it is ever more popular, especially for the construction of environmentally-friendly buildings, especially “round houses”.

The circular window in the middle of the rood serves as bean wave guide made of reflective foil which reflects sunlight inside. The cast, as well as floors, are traditional clay, using old rollers as material. Heating and cooking will be done with a simple clay, so-called Russian oven, while in the transitional period, the house will be heated by a so-called Trombe’s wall – a photovoltaic collector made of an old window that blasts warm air inside.

“The whole house, save for the southern side, as well as the roof, are covered with clay, which makes an ideal layer for securing an apt climate and for accumulating heat during the heating season, which will reduce the amount of energy supplied to a minimum,” Szabó said. “We will plant plants into the soil; which will create a huge, so-called vegetation molehill.”

He added that most of these solutions were tested and proven well in developing countries and adapted to our climatic conditions. The goal is to adapt and expand such houses especially among socially weaker groups, but also among environmentally-inclined individuals who want to avoid the trap of mortgages. Thus, they opted for materials that are available at people’s disposal, and simple technologies that can be managed by most people.