Gašparovič violated Čentéš’s rights when he refused to appoint him

FORMER president Ivan Gašparovič violated Jozef Čentéš’s basic rights when he was lawfully elected by the parliament to the post of prosecutor general, but Gašparovič refused to appoint him, the Constitutional Court ruled on December 4. The court has also cancelled the late 2012 decision of Gašparovič. 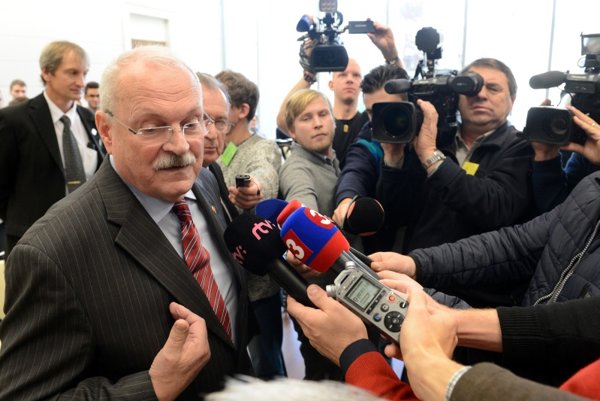 FORMER president Ivan Gašparovič violated Jozef Čentéš’s basic rights when he was lawfully elected by the parliament to the post of prosecutor general, but Gašparovič refused to appoint him, the Constitutional Court ruled on December 4. The court has also cancelled the late 2012 decision of Gašparovič.

In the meantime Jaromír Čižnár was elected to fill the role by the Smer-controlled parliament in June 2013. Prime Minister Robert Fico was quick to respond that though he respects the court’s decision, he does not see a way back.

This is the first time in the history of Slovakia that the Constitutional Court found the president violated a person’s rights, Čentéš said.

“I appreciate that the Constitutional Court did not yield to pressures and decided independently,” said Čentéš as quoted by the TASR newswire. “Today’s decision by the Constitutional Court contributes to deepening the rule of law in Slovakia, because in my case the character of the state was at stake: whether a state body can violate the rights of an individual”.

The Constitutional Court’s first senate led by Ladislav Orosz approved compensation of €60,000 for Čentéš, who said he would redirect the money to charity and a legal ethics watchdog group.

Gašparovič decided on not appointing Čentéš while Čižnár, was legitimately elected, Fico argued. “I do not believe that we have erred,” he said.

Gašparovič, who attended the court session as part of the audience, argued to the press that the respective senate was not entitled to decide on the case as he previously maintained his objection of bias towards Orosz and judge Ľudmila Gajdošíková. The former president also maintained his reasons for the refusal to appoint Čentéš and called the decision of the court “a defeat of Slovakia’s citizens in a time of fighting against corruption”.

The term of the previous general prosecutor, Dobroslav Trnka, expired in February 2011, but it took until June of that year for parliament to elect Čentéš as his replacement. However, Gašparovič then refused to appoint him, despite the Constitutional Court ruling in October 2012 that his election had been constitutional.

Gašparovič on December 28, 2012 sent a letter confirming his refusal to appoint Čentéš to former speaker of parliament Pavol Paška arguing that the process had become a subject of political dispute while a candidate elected under such circumstances becomes untrustworthy regardless of the person in question. He also said that Čentéš himself actively took part in what he called “these political games” and accused him of publicly “slandering the president” via the public media, saying that Čentéš blamed him for violating the constitution by not appointing him.

The president also referred to an incident involving MP Igor Matovič, then of the Ordinary People faction, who had to testify twice at the prosecutor’s office in a case overseen by Čentéš because the record of his first testimony was deleted from the office computer and the hard copy was shredded. Čentéš said that the shredding of the document was a human error.

However, Gašparovič in his letter says that Čentéš did not “display enough responsibility” during the shredding incident.

Opposition parties have been extremely critical of the president’s refusal to appoint Čentéš and he promptly appealed the decision to the Constitutional Court, claiming that his rights had been infringed. The case became bogged down after he and Gašparovič between them challenged 12 of the court’s 13 judges on grounds of alleged bias.

Jaromír Čižnár, a former law-school classmate of Fico, before his election to the post had said that if the Constitutional Court confirms that he personally by participating in the election violated the rights of Čentéš, he would resign from the post.

“The so far statements that General Prosecutor Jaromír Čižnár presented continue to be valid,” Office of General Prosecutor spokeswoman Andrea Predajňová told TASR, adding that Čižnár needs to read the whole decision of the Constitutional Court.

Officials from the Fico government lined up to defend the election of Čižnár from July 2013.

Finance Minister Peter Kažimír argued that if the government had waited with the election and appointment of Čižnár “there would have been a personnel vacuum at the general prosecution and we could not have reached the success we have reached in the fight with tax evasion”.

Čižnár has not lost his legitimacy to continue serving in the post, said Interior Minister Robert Kaliňák.

“He was regularly elected; no one has challenged his election,” Kaliňák said as quoted by the SITA newswire. “I do not know what would have been here if Mr Čižnár did not take over.”

Former justice minister Lucia Žitňanská, presently a member of the opposition Most-Híd party, has said that the decision strengthens the rule of law in Slovakia but “at the same time it also is a decision about the nature of power in the hands of Smer”.

“For the whole time there was a single thing in play – the scenario of Robert Fico to take over the general prosecution,” she said.

Žitňanská said that the parliament should not have elected the prosecutor general until the Čentéš case had been ruled on by the court.

“It is only a cancellation of a decision without returning [the case] for further discussion,” Bárány said, as quoted by the Sme daily, adding that he did not think the decision will have a major impact on the Slovak constitutional practice. If it did,” he added, “it could lead to a more restrictive approach to applying the personal powers of the president.”