THE END of the year is traditionally a tough time for the third sector in Slovakia, as the question of the so-called assignation mechanism is again being reopened. And while last year the existing setting of the scheme enabling private as well as corporate taxpayers to assign a portion of their paid income and corporate taxes to a selected non-governmental organisation was kept, in November this year the Slovak parliament approved a revision to the income tax law based on which firms will be able to assign a lower portion of their taxes or will have to donate more from their profits in order to increase their assigned share. The third sector fears that this change could result in a gap in their funding and that it will mean less money to support their activities. 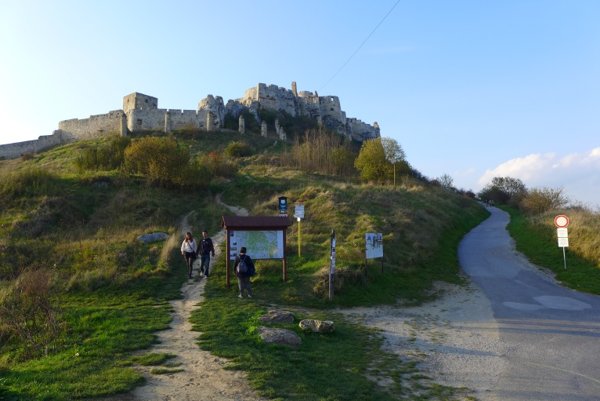 Renovation of cultural monuments is also on the list of NGOs' activities. (Source: Courtesy of Ekopolis)
Font size:A-|A+0

THE END of the year is traditionally a tough time for the third sector in Slovakia, as the question of the so-called assignation mechanism is again being reopened. And while last year the existing setting of the scheme enabling private as well as corporate taxpayers to assign a portion of their paid income and corporate taxes to a selected non-governmental organisation was kept, in November this year the Slovak parliament approved a revision to the income tax law based on which firms will be able to assign a lower portion of their taxes or will have to donate more from their profits in order to increase their assigned share. The third sector fears that this change could result in a gap in their funding and that it will mean less money to support their activities.

“I still believe that revenues from the assignation would not decrease and that the finance minister would keep his public promise and would search for solutions,” Pavel Hrica, programme director at the Pontis Foundation, a leading NGO, told The Slovak Spectator.

According to Hrica, the potential decrease in revenues from the tax assignation scheme would have very negative consequences for the third sector consisting of non-profit and non-
governmental organisations (NGOs) and there is a threat that the activities of publicly beneficial services would be reduced or even cancelled.

“Because of this there may be more homeless people in the streets, more ill people for whom there would be no way to help them, more families with hearing-impaired children without proper early care, less reconstructed cultural monuments and so on,” said Hrica, listing what some of the consequences lower revenues for NGOs would mean.

Soňa Lexmanová, executive director of the Slovak Donors’ Forum, expects that less money in the already under-financed sector of publicly beneficial services would be devastating for hundreds or even thousands of projects.

“There will occur problems which the state has not needed to solve so far to such an extent,” Lexmanová told The Slovak Spectator.

Eduard Marček of the Slovak Fundraising Centre (SCF) perceives the latest changes as efforts to search for savings in the state budget in the wrong place, especially in light of wasting public sources at other places.

“The impact will certainly be for the third sector painful, but on the other hand it may move it to search faster for resources in classical donating and develop especially raising funds from individuals,” Marček told The Slovak Spectator, adding that this is where SCF sees the future for sources for the non-profit sector.

The third sector is afraid that companies would continue to not use the possibility to increase the share of paid taxes assigned by donation of their own funds. So far, the third sector estimates that only about 10 percent of companies assigning taxes used this option. This is also because this scheme was adopted before the economic crisis when prospects of profits of companies and thus also their willingness to donate money were much rosier than they are now

The Finance Ministry, which had proposed the change, recalled that it had already agreed in 2009 with representatives of the third sector about a gradual reduction of the tax assignation from 2 percent to 0.5 percent in 2019, the Finance Ministry recalled for The Slovak Spectator. During following years, after insistence from the side of NGOs, it postponed the already approved terms. Now it wants to stick to the original plan and reduce the percentage share to 1.5 percent.

The Finance Ministry explains that they decided so based also on an analysis of those companies using the assignation scheme which showed that most of these companies are the biggest, most prosperous companies in Slovakia, which have launched their own foundations, civic associations and other organisations eligible to receive assigned taxes and that they assigned the share of paid taxes to their own organisations. This finding was also an impetus to introduce the scheme conditioning the maximum assignation by a duty of the taxpayer to provide a financial donation from its own resources.

The Finance Ministry estimates that the reduction of revenues from the corporate assignation scheme would be lower, at about €4-6 million, and believes that this gap could be patched by alternative resources, for example subsidies from the state budget, and revenues from charity advertising or charity lottery. It perceives the latter as being thus far too little promoted by NGOs.

NGOs perceive these alternatives as supplementary, while it is even not possible to estimate funds that could be raised this way. Hrica specified that the launch of the charity lottery requires uge starting capital and at the beginning it would be necessary to solve the return of investments. Legislation enabling charity advertising also has yet to be passed.

“In any case, all these are as yet very unclear and so-far insufficient ‘alternative resources’,” Hrica told The Slovak Spectator.

Marček, who sees these sources as an interesting supplement to the total mix of financing, their launch would last some time and that it is not possible to estimate revenues they will generate.

Lexmanová of the Donors’ Forum welcomes proposals of alternative resources, but she does not see them as a systematic solution to complex requirements of the third sector.

Lexmanová and Marcel Zajac of the Centre for Philanthropy also pointed out that the environment of philanthropy is very specific and linking philanthropy with hazard may bring several hurdles. Zajac specified that for many companies, hazard is the source of problems due to which they have to provide their services; thus, their financing from a lottery would be imaginable.

In terms of alternative resources, Lexmanová pointed out that their volume as well as the form of fundraising is closely connected with the activity the given organisation carries out as well as communication.

“While it is enough to hold a public collection among inhabitants to clean a brook in a small village, for the purchase of a new, for example, incubator for a hospital, you have to use donations from companies, as well as collections in the form of bank deposits or donor text messages,” said Lexmanová.

According to Pontis, NGOs can and do use for their financing donations, member fees, grants as well as incomes from their own operation. But when all possible resources and their volumes are taken into consideration, Pontis sees the tax assignation as being the main source of financing of NGOs and that cannot be compensated by anything else.

“The joint interest of the state as well as NGOs is the support of donating,” Hrica said, adding that the state is now already trying to motivate companies to donate when companies donating money from their own resources can assign a higher portion of paid taxes. “The state may strengthen this motivation even further, and widen the difference between those who donate and those who don’t.”

Pontis, as well as ASFIN, supports keeping the assignation scheme because it is well established and accepted in the society.

“This mechanism as well as additional tools should motivate companies to donations,” said Hrica. “Donating is the healthiest source of financing for NGOs. But it is necessary to support and build it over the long term.”

The Finance Ministry agrees that the optimal scheme of the public support of financing of the third sector should stem from existing tools, especially the tax assignation. As Martin Filko, director of the Institute of Financial Policy (IFP) a governmental think tank, explained, it should support private donations, which should grow faster than public support. He believes that for private donations and small NGOs, it would be good to maintain the privacy of donors and recipients while for large NGOs active in lobbying and politics he prefers as much transparency of their incomes and expenditures as possible, commensurate with rules in a well functioning public sector.

“The Finance Ministry is working on such a reform of the existing mechanism and it will introduce it during the upcoming months,” Filko told The Slovak Spectator.

Hrica would welcome grants and subsidies for NGOs but with a transparent and clear selection system and minimising the risk of corruption, while it would be ideal that as many sources as possible are independent of interference from political nominees.

Fedor Blaščák, secretary of the Association of Corporate Foundations and Funds, would consider ideal such a scheme that would be the result of a constructive and rational discussion of all stakeholders.

Lexmanová’s ideal scheme would be funds in a satisfactory amount donated by individuals and companies doing so because they want to help do a good thing. But as this is really an ideal, which is literally a utopia, there should exist clear mechanisms motivating companies to donate, while simultaneously supervising the resources.