A lot still needs to be done

MORE THAN 25 years ago, there were working Saturdays and voluntary involuntary brigades, all under close scrutiny by the only correct political party. The fall of the communist regime in 1989 ended all of this, making space for the arrival of corporate social responsibility. But even though a lot has been done and the mind-set of people as well as companies has been changing, there is still a lot of room for improvement. 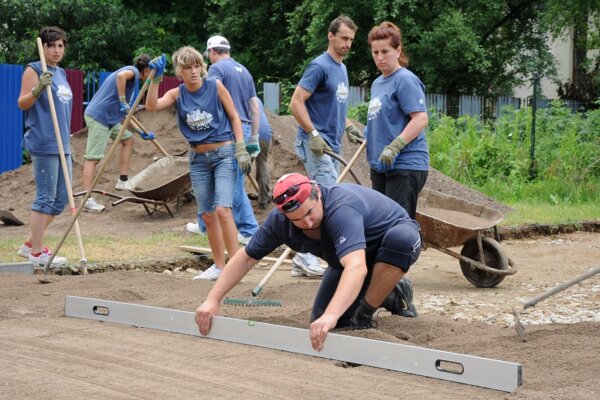 MORE THAN 25 years ago, there were working Saturdays and voluntary involuntary brigades, all under close scrutiny by the only correct political party. The fall of the communist regime in 1989 ended all of this, making space for the arrival of corporate social responsibility. But even though a lot has been done and the mind-set of people as well as companies has been changing, there is still a lot of room for improvement.

“Corporate philanthropy, as well as philanthropy in general, has not been settled in Slovakia to a full extent,” Soňa Lexmanová, executive director of the Donors’ Forum, told The Slovak Spectator. “There is still a lot of people and companies who do not exactly know what philanthropy is. Even if a company launches its own foundation, the fact that it is perceived exclusively as a marketing step does not help this. But it is also true that especially thanks to the Velvet Revolution, the will and willingness to help those who need it has soaked into us.”

Pavel Hrica, programme director at the Pontis Foundation, a leading NGO, is also afraid that the general public still does not fully understand corporate philanthropy.

“Nevertheless, for large companies, as well as a portion of small ones, philanthropy has become a normal part of their operation,” Hrica told The Slovak Spectator.

Eduard Marček of the Slovak Fund-raising Centre (SCF) agrees that companies themselves perceive the need to acti--vely participate in problem solving. On the other hand, people also perceive to a much larger extent that companies also have their place in solving society’s problems, and paradoxically they expect from them that they would support, especially fields like science and research or protection of the environment, which they as individual donors have the minimum interest to support.

Foreign corporations brought to Slovakia not only investments, but also corporate philanthropy; this includes a whole complex of steps which have been gradually incorporated here, according to Lexmanová. Part of it is corporate responsibility, consideration for the environment, corporate culture benefits for employees. This also includes general corporate responsibility of small as well as large companies, in fields in which they do their business and in communities which are their target group.

According to Hrica, corporate philanthropy has become more strategic since the Velvet Revolution, as companies have been moving from one-off charity to searching for effective solutions to society’s problems.

“Not always, and there still exists a lot of one-off charity, but many companies are considering not only how to help solve consequences of a negative phenomenon, but also how to solve it and mitigate it as it is,” Hrica said. “Within philanthropy it has become normal not only to donate money, but also the time of the company’s employees, i.e. to develop corporate volunteering.”

Andrea Cocherová, the chair of the Association of Corporate Foundations and Funds and the administrator of the foundation of Orange mobile operator Nadácia Orange, added that many companies approach this field not only systematically, but also transparently.

“This, of course, positively affects perception of corporate philanthropy, either by the public or by NGOs,” Cocherová told The Slovak Spectator.

According to Fedor Blaščák, secretary general of the Association of Corporate Foundations and Funds, Slovakia has been moving forward in terms of corporate philanthropy.

“Large foreign investors have brought with them also a new corporate culture with a professional approach to the topic of social responsibility,” Blaščák told The Slovak Spectator. “Along with this there also exists a less visible, but equally important trend – local patriotism, which touches upon thousands of smaller companies and local projects.”

In Slovakia the model of financing philanthropic activities via the assignation of taxes has been introduced. This is now perceived as the main source of finances for non-governmental and non-profit organisations. Firstly, in the late 1990s private individuals got the chance to decide on over 1 percent of their paid income taxes and assign this money to any eligible non-profit organisations (NGOs). Later this portion was increased to 2 percent and the circle of entities eligible to assign a portion of paid income taxes was extended to companies.

While private individuals can continue to assign 2 percent, a so-called matching principle was introduced into the assignation scheme of companies. This means that to assign the maximum possible portion of paid corporate taxes, a company has to donate some money from its own resources. The amount of money raised this way increased from the initial €3.4 million to about €52 million raised from taxes paid in 2013.

While some organisations involved in philanthropy perceive the assignation scheme as the main source of finances for the third sector, others do not see it as pure philanthropy.

Marcel Zajac of the Centre for Philanthropy recalls that in philanthropy, it actually goes about its own financial means of corporate entities donated to public sectors, or other subjects or individuals, who do not have any other relation with the corporate entity. He is one of the authors of the idea that the assignation mechanism becomes a tool motivating companies to make donations.

“I have never thought that assignation is philanthropy,” Zajac told The Slovak Spectator. “I was even one of a small number of representatives of non-governmental organisations who pointed to this when the assignation mechanism was being introduced.”

Eduard Marček of the Slovak Fundraising Centre (SCF) sees the criticisms of the assignation scheme as also being partly justified.

“People via the assignation decide about assignation of the tax, but these funds are from their basic public funds, which they would have paid in any case and would have ended up in the state budget,” Marček told The Slovak Spectator. “On one hand the assignation gives a feeling that people or companies are donating on their own and do not need to have a need to give more. On the other hand, the reality shows that especially in the case of companies, the assignation mechanism has helped to intensify communication and cooperation between companies and the non-profit sector.”

Hrica agrees that while initially companies by assignation saturated expectations, it should help the community, “but in the praxis we saw how this was changing and that companies who assigned the most also started to donate the most.”

“This was even more visible when the matching principle was introduced into the assignation scheme,” said Hrica. “The current mechanism motivates companies to donate.”

“Corporate philanthropy has not been around for long, and thus there is space for improvement in everything,” said Zajac, adding that it is primarily important that citizens, those accredited with administration of public affairs, employees of companies and their owners, and also all those dependent on companies’ help agree upon the basic motivation of behaviour and realise the inevitability of cooperation and synergy, especially when achieving results in shared goals.

“I certainly see room for improvement in the perception of companies’ foundations,” Cocherová said, adding that the trust in handling money raised via tax assignation of companies is not sufficient in general.

According to Cocherová, in terms of this there is a lot of work ahead of them but she believes that through open discussion with stakeholders they will manage to remove biases and contribute to a better system. She believes that better specification of duties when reporting on how money raised via the assignation was spent and a more consistent supervision would be a help to many.

Hrica would also like to see smaller Slovak companies implement elements of corporate philanthropy. He also recalls that nowadays it is possible to see in the world development of brand new forms, for example created shared value, when companies are changing their whole business in order for it to bring value to the company as well as society.

“The worlds of business and NGOs are getting so close that the difference between them is disappearing,” said Hrica. “Successful companies more and more focus not only on their bottom line, but also on that they should bring benefits to the community in which they do their business, which is for them equally important as profit.”

On the other hand, many NGOs are nowadays running businesses quite successfully, according to Hrica. He sees the future in this approach when it would not matter what is a company and what is an NGO.

“Contribution to the world, healthy finances, interconnection with the surroundings, the ability to win the enthusiasm of the best employees will be important,” Hrica said. “Already in Slovakia there are nice examples of small companies thinking this way, and some large ones are starting, too. But a change in thinking is still ahead for the majority of companies.”