NATIONS and countries have their moments that make history; in the case of November 17, 1989 this was a turning point for a whole region – eastern and central Europe – that was connected by the same regime of communism. It started first as a subtle, not quite probable protest movement, a feeling that something was happening and that the undercurrent of reluctance and resistance were finding their way to the surface, in the process connecting with other similar streams and finally erupting as forceful currents and geysers of revolt that toppled the regimes. 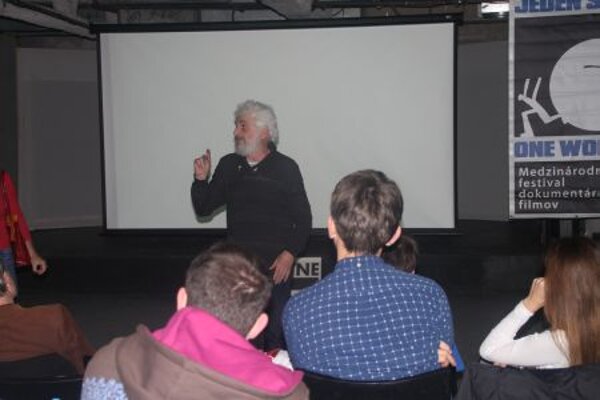 NATIONS and countries have their moments that make history; in the case of November 17, 1989 this was a turning point for a whole region – eastern and central Europe – that was connected by the same regime of communism. It started first as a subtle, not quite probable protest movement, a feeling that something was happening and that the undercurrent of reluctance and resistance were finding their way to the surface, in the process connecting with other similar streams and finally erupting as forceful currents and geysers of revolt that toppled the regimes.

In 2014, it was difficult not to observe the 25th anniversary of this revolution that received the attribute “Velvet” in the successor countries of former Czechoslovakia, meaning that there were no fatalities and no big battles, unlike e.g. in Romania. However, when looking back, it was hard for individual observers not to feel a tinge of bitterness, summarising the expectations and the reality.

The One World / Jeden Svet film festival of engaged and socially-themed films could not possibly have ignored this anniversary. Apart from the usual dose of foreign documentaries mapping the state of democracy, rule of law and observing human rights around the world, this time between November 20 and 25, 2014, it also targeted the state of Slovak (as well as Czech, due to the common past and close current ties) democracy.

The documentary about Czech singer-turned-dissident Marta Kubišová, who also became one of the faces – or rather voices – of the Prague Velvet Revolution, not only won the popular vote at the film festival in Karlsbad earlier this year: it also received the most votes in One World’s poll, becoming the audience’s number one choice.

Director Olga Sommerová came in person to one of the screenings and commented on the film which uses not only conversations with Kubišová and excerpts from her current life, but also archive footage, including former writer-dissident-president Václav Havel and people from Czech show biz and politics commenting on her personal life and work.

Sommerová said that there are only a few people still alive whose work and fate would be so greatly impacted by their opinions, desires for freedom and for truth. However, Kubišová in the film denies being an active “heroine” and rather describes something like twists of fate that changed her path from a star allowed to perform in the Parisian Olympia, to a spokesperson of dissidents grouping around “Charter 77”, while not being allowed to have any better job than feeding cattle in a co-op or cleaning.

Sommerová attended the screening of her film on November 22 in the Mladosť cinema. A little later on that evening, another woman attended the Slovak and world premiere of a documentary that tries to show another fate influenced by communism, albeit on the opposite side (if it is possible at all to clearly draw a line between the official and the rebelling side).

Salto Mortale was directed by Anabela Žigová, a Slovak born in the heyday of communism. A visual artist and director of experimental short films, she now mostly works and lives abroad. Her film revolves around the fact she learned accidentally years after her father had died that he was an agent of the communist-era secret service, ŠtB.

Not having him at hand to learn “the full truth” (again, if anything like that exists at all), Žigová started collecting the remains of her father’s file – shredded soon after the Velvet Revolution, as were many ŠtB files – and the remains of memories of people who may have been somehow put in the picture, or directly involved.

The results remain meagre as far as facts; however, this helps complete the image of the prevailing mood – not just in one family, but probably in most of Slovak society. “Let past things remain past, and not stain our bright present, and maybe even future”.

Salto Mortale, although maybe too “arty” in places and too shallow in some moments that might have required greater pressure and endurance, nevertheless opens an issue that is much needed but rather suppressed “not only in the generation directly involved, but also among the younger generations – i.e. under 40 – which is hardly understandable”, according to Žigová.

This was also proven by the fact that the Kino Europe cinema was crowded, chairs had to be added. The film, which will have English subtitles, might be a good memento and catalyst for deeper consideration, not just for the locals, but also a clue for foreigners on how complex life during communism was, and how people got used to mastering a schizophrenic double life of nice professionals and relatives on one hand, and professional secret service confidants on the other.

Rather than giving clear answers or a simple story, the film evokes questions and doubts with an open end; but for the purpose of starting a debate, this might be even better.

Questions remain also after another documentary, 35 Months with Little Nathalie / 35 mesiacov s Natálkou, which maps the aftermath of a racist attack that left a girl of 2 years severely injured and affected her whole family. The film, shown on November 23 in KC Dunaj, turns the focus on an arson attack which took place in April 2009 in the Czech town of Vítkov, leaving the girl severely burnt and also her two sisters and her parents injured and heavily traumatised.

Fedor Gál, one of the proponents of the Velvet revolution in Slovakia and a sociologist who now lives in the Czech Republic, decided to help the family (with Martin Hanzlí-ček) and also to shoot a documentary following the development of the case, mostly in the family environment, but also describing the media coverage, the court trials with neo-Nazi attackers, and the twist and turns of public moods – as well as the lack of help for the family from the state.

Gál, who was present at the screening, said that it was hard to find the proper way to depict the case with respect to its participants, without intervening too much or evoking too-great expectations, but by focusing on what can be done for them.

Finally, he admitted that they may have made some mistakes, although in goodwill, and that they shot the movie mostly about themselves; not about Natálka.

But the bottom line is that the family expressed satisfaction with the result and even asked them to continue shooting their family life, even if it was just to become a “home-video” and a kind of therapy for the small victim who bravely handles her fate, Natálka.

25 years in a nutshell

The public debate on November 23 in the evening, called “Freedom Is Not for Free – 25 Years After” within Café Europe was one of the highlights of the festival. Of course, it is not possible to squeeze 25 years of “fight for democracy” and perhaps also coping with this “premature capitalism” of ours into a single evening.

However, the exchange involving four people of different ages, different experiences and different life stories, offers at least an insight and an impetus for evaluating the ups and downs of our current system.

Musician, producer and festival organiser Michal Kaščák (42), literature theoretician, politician and translator Peter Zajac (68), sociologist Zora Bútorová (60+), and theologian, eschatologist and writer Michal Havran Jr (40+) discussed what were the pros and cons of the previous regime and what pros and cons brought about its toppling. It seems that in some spheres, the development is unambiguously positive (e.g. music), while in others, it goes rather downhill (e.g. Slovak education), while in some, the situation is disputable.

But this debate showed, as did the whole festival of engaged documentaries One World, that such debates are needed, even sought-after, and such accompanying events are an added value.

The only competition of the festival of Slovak documentaries was won by a film that goes even deeper into the national history, to World War II – The Final Mission / Neznámi hrdinovia, directed by Dušan Hudec, about US war pilots and their Slovak saviours.

So the motto of the 15th year of the festival could be “The Past is Not Dead – Long Live the (National) Past!