THE SLOVAK capital may not be the place you would immediately associate with widely-known Christmas markets, but it is probably the place with the biggest density of these markets per square meter: in its wider centre, at least four separate markets have expanded their kiosks, nativity scenes and choirs singing carols. 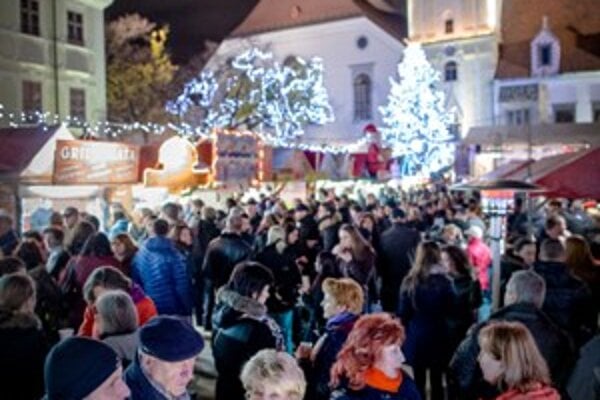 THE SLOVAK capital may not be the place you would immediately associate with widely-known Christmas markets, but it is probably the place with the biggest density of these markets per square meter: in its wider centre, at least four separate markets have expanded their kiosks, nativity scenes and choirs singing carols.

The two biggest competing markets close to one another. In the Main Square, there are stalls with typical Slovak Christmas food and drinks, souvenirs, small handicraft products, roasted chestnuts, a book-case to choose a book from for free, and a big stage offering folklore trou-pes, choirs, rock music and more, just next to a huge decorated tree. Popular meals include a Slovak version of kebab: cigánska, a slice of bread with pork fat and onion, or a potato pancake rolled and filled with different fillings – lokša. Drinks include mulled wine, toddies or spiced tea.

In Hviezdoslavovo Square around the corner, the composition is almost the same, only the stage has been replaced with an artificial ice rink. The shape of the square enables a better arrangement of stalls along its flanks, but still – those who would like to avoid pushing in the crowd are better advised to come during the daytime on workdays.

In Slovakia, part of the Advent period and Christmas season has a special feature: a Bethlehem, or a nativity scene either re-enacted by live people (maybe even live animals); or made from wood, paper, textiles, corn husk, stone burnt into clay, etc. At Bratislava’s Christmas market, you can experience the former and buy the latter as a souvenir, if you come to like the tradition.

Another smaller market is taking place in the courtyard of the Old Town Hall: the Craftsmen’s Christmas Market offers small souvenirs of natural materials, typical gastronomy, and also animals from the local zoo, helping to create the festive atmosphere until December 20. There will also be re-enactments and performances of the amateur Depaul theatre here.

The “Handicraft Christmas Market” is being organised for the first time this year by the public Radio and Television of Slovakia (RTVS) in front of its building at Mýtna 1. Called “Under the Pyramid” – a reference to the shape of the famous building – it also offers foods and drinks from various other traditions and cultures, unusual presents, Christmas postcards, and many concerts until December 12.

A more commercial Christmas market that also presents a selection of more than 800 unique Bethlehems, can be visited in the Expo Aréna Incheba complex on the Petržalka bank of the Danube. If the weather outside gets too cold for roaming around the outdoor markets, you can pop in there, too; it is not too far from the centre, accessible both by city transport and on foot.

Most Christmas markets last until December 23, but some stalls will continue until the end of the year. More detailed information can be found at citylife.sk or bkis.sk.

Other Slovak cities and towns have their Christmas markets, too, and it advisable to check on their websites for more detailed programmes.