NAMES and borders of many Slovak areas date way back into the past. Even before the arrival of the old Hungarians, Slavs had created their own system of regions in the early Middle Ages. 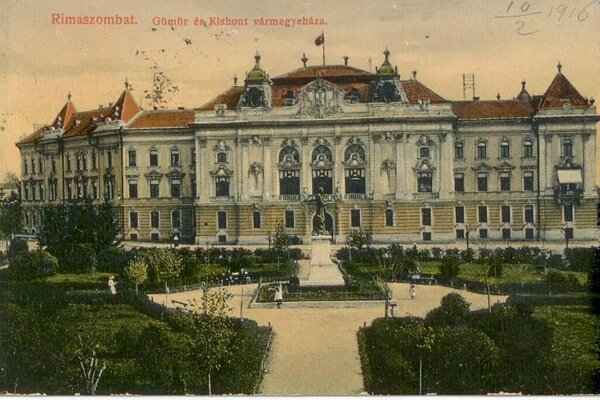 Then, after the Hungarian Kingdom came into existence, the original Slavonic regions changed into royal counties called “komitáts”. The Slavonic origin of komitáts can be traced for example to Hungarian words such as megye – the komitát or county; and ispán – the official who headed the komitát. Megye stems from the word medzä (boundary, baulk) and ispán from the word špán, meaning pán (mister, gentleman, or lord).

Thus, it is quite understandable that when the proposal to re-introduce the word župa for an administrative region, a wave of protests followed. However, it stemmed from ignorance and ancient fears of everything Hungarian.

In this postcard from 1916, we can see the pretentious regional centre, or župný dom, of the areas of Gemer and Malohont in Rimavská Sobota. These two regions existed separately most of the time, while Malohont was considered rather as a district.

Proof of the Gemer komi-tát appeared as early as the 12th century. It resided at the Gemer Castle, but since 1578, the local gentry met at the “stolica” meetings in Boršo-dská Stolica at the Szendrö Castle. [Stolica was a nobility-owned region, while komi-tát was a royal region and župa was a state-owned region.] This was prompted by fear of the Ottomans.

Since the beginning of the 18th century, the meetings moved to Gemer-based Plešivec, but many considered this decision rather unfortunate. Plešivec, in spite of becoming the centre of political life of this župa, remained an undeveloped province seat, or rather a village than a town.