Čižnár to stay on as prosecutor

THE LANDMARK ruling of the Constitutional Court from December 4 on the case of lawfully elected but never appointed general prosecutor Jozef Čentéš is unlikely to induce any changes to one of the most powerful judicial positions in the country. 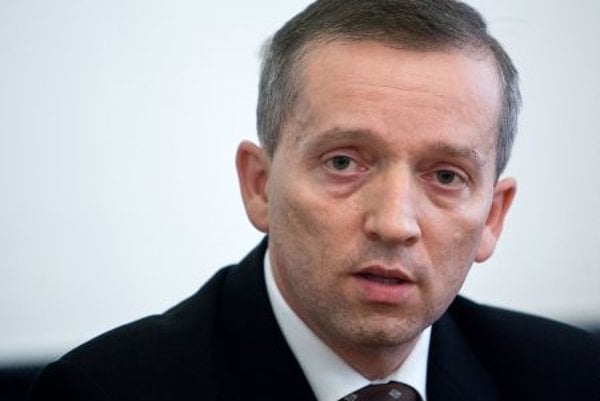 THE LANDMARK ruling of the Constitutional Court from December 4 on the case of lawfully elected but never appointed general prosecutor Jozef Čentéš is unlikely to induce any changes to one of the most powerful judicial positions in the country.

Now held by Jaromír Čižnár, who was elected to fill the troublesome general prosecutor post by the Smer-controlled parliament in June 2013, he insists he does not plan to step down. In doing so, he claims that the Constitutional Court also confirmed that his election to the top prosecutor job was legitimate and that it was actually Čentéš who encouraged him to run.

“Mr Čentéš was persuading me at these meetings to go for the general prosecutor candidacy,” said Čižnár on December 8 at a press conference, as quoted by the TASR newswire, while describing what he called three confidential meetings initiated by Čentéš. “He told me that the election will happen and it would be a pity if I refused the candidacy, because according to him I am a suitable person.”

Čižnár was responding to Čentéš, who in a televised talk-show with former president Ivan Gašparovič (whom the Constitutional Court found had violated Čentéš’s basic rights by his refusal to appoint him) described what he called their private conversations. Čentéš told the Slovak Radio and Television (RTVS) on December 7 that he had approved Čižnár’s candidacy and that Čižnár had promised that he would resign if the Constitutional Court found that Čentéš’s rights were violated through his actions.

“Go into it, I will be waiting for three to four years, I am supporting you,” Čentéš described his conversation with Čižnár from 2013 for the Sme daily.

Čižnár in an earlier interview with Pravda daily appealed to Čentéš to come out about their 2013 meeting preceding Čižnár’s candidacy.

The Constitutional Court has cancelled the late 2012 decision of Gašparovič, with Prime Minister Robert Fico promptly responding to the developments by saying that he does not see any way back. The first senate led by Ladislav Orosz approved compensation of €60,000 for Čentéš, who said he would redirect the money to charity and a legal ethics watchdog group.

Nevertheless, it was Čentéš’s encouragement in 2013 that gave him a final push to pursue the job, Čižnár said.

“He wanted me to get there because I have tougher methods of management. But I am not wicked and I would not go against him and would leave him in peace,” said Čižnár as quoted by TASR on December 8.

Čižnár denied that he promised Čentéš that he would later resign.

“I said this statement for the first time at the parliamentary constitutional legal committee, when Mr [Radoslav] Procházka asked me about it,” Čižnár said, explaining that he responded to Procházka, the opposition deputy in parliament, that if the Constitutional Court says that by his participation Čentéš’s rights were violated, he would resign. “This did not happen anyway.”

Čentéš in his response sustained his own claims he told media on December 7 noting that his appeal to the Constitutional Court from its submission on January 3, 2013, included the proposal that the election of a new prosecutor general be halted.

“Prosecutors have picked among themselves Jaromír Čižnár, in a very unambiguous way, to be the candidate for the general prosecutor, considering his professional and personal qualities,” Fico said in June 2013, when arguing for Čižnár’s candidacy.

Čižnár himself described his candidacy back in 2013 by suggesting that “six of the seven regional prosecutors addressed me so that I accept the candidacy, which was decisive for me,” according to Sme.

Shortly after the court’s ruling, officials from the Fico government lined up to defend the election of Čižnár in July 2013.

Finance Minister Peter Kažimír argued that if the government had waited with the election and appointment of Čižnár, “there would have been a personnel vacuum at the general prosecution and we could not have reached the success we have reached in the fight against tax evasion”.
Čižnár has not lost his legitimacy to continue serving in the post, said Interior Minister Robert Kaliňák.

“He was legally elected; no one has challenged his election,” Kaliňák said as quoted by the SITA newswire. “I do not know what would have happened here if Mr Čižnár had not taken over.”

The term of the previous general prosecutor, Dobroslav Trnka, expired in February 2011, but it took until June of that year for parliament to elect Čentéš as his replacement. However,

Gašparovič then refused to appoint him, despite the Constitutional Court ruling in October 2012 that his election had been constitutional.

On December 28, 2012, Gašparovič sent a letter to former speaker of parliament Pavol Paška confirming his refusal to appoint Čentéš, arguing that the process had become a subject of political dispute, while a candidate elected under such circumstances becomes untrustworthy regardless of the person in question. He also said that Čentéš himself actively took part in what he called “these political games” and accused him of publicly “slandering the president”
via the public media, saying that Čentéš blamed him for violating the constitution by not appointing him. Opposition parties have been extremely critical of the president’s refusal to appoint Čentéš and he promptly appealed the decision to the Constitutional Court, claiming that his rights had been infringed. The case became bogged down after he and Gašparovič between the two of them challenged 12 of the court’s 13 judges on grounds of alleged bias.

Meanwhile, Gašparovič recently suggested during a RTVS debate that he might challenge the verdict of the Constitutional Court at the European Court of Human Rights in Strasbourg, arguing that the court overlooked his objections of bias towards the judges, and thus it violated his rights.