SLOVAKIA needs more Roma with a university-level education, say participants in the “Even you have a chance” programme, which provides free courses, scholarships or extra lessons at the University of Economics in Bratislava (EUBA) for Roma wanting to study there. 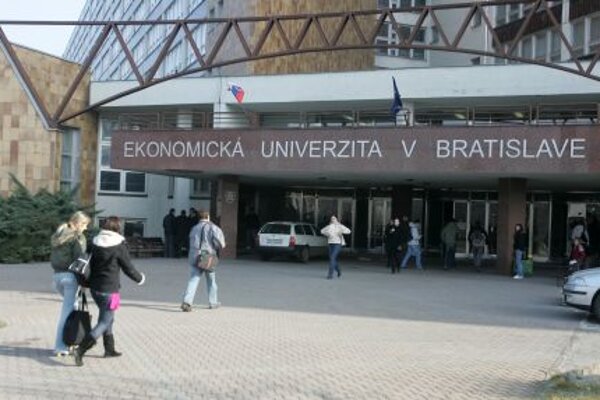 No Roma currently study at the University of Economics in Bratislava. (Source: Sme)
Font size:A-|A+

“Any improvement of Roma inclusion is conditioned by the growth of their middle class,” Jarmila Lajčáková from the Centre for Research of Ethnicity and Culture (CVEK), which participates in the programme, told The Slovak Spectator. “This means that we need more economists, doctors, judges and teachers who are Roma.”

The university will introduce temporary compensatory measures for Roma including free admission courses, special assistance or scholarships of about €700 per semester. It will include Roma culture and courses on the position of Roma in society in the curriculum. At EUBA there are currently no Roma students, and in Slovakia just 300 Roma will graduate from secondary schools this year, according to a CVEK analysis, the Sme daily reported. The share of Roma with post-secondary education reached 0.5 percent, while in the case of non-Roma citizens living in proximity to Roma households it is 6.8 percent, according to a 2012 UNDP study.

EUBA Vice-Rector Jana Lenghardtová said the university will not prefer Roma applicants over others, but will help Roma to prepare for entrance exams, according to Sme. Lajčáková hopes for at least 10 Roma applicants in the first year.

“Of course, Roma students will have to fulfil all conditions for acceptance to university including entrance exams,” Zuzana Balážová of CVEK said in press release. “If they succeed they will sit on school benches as of September 2015.”

The Education Ministry is not planning special aid for Roma at universities, as it does not track the nationality of students, ministry spokeswoman Beáta Dupaľová Ksenzsighová told Sme.

EUBA offers numerous fields of study from banking, taxes and corporate management to IT and foreign languages. It has very good results in graduate employment rankings, as three faculties repeatedly appear among the top 10 faculties by graduate employment on the Profesia.sk job portal. Moreover, its Faculty of Business Economics is based in Košice and could attract Roma from eastern Slovakia, Lajčáková said while explaining why CVEK cooperates with EUBA.

“The University of Economics is not a traditional player in the Roma issue,” Lajčáková said. “Therefore we thought it would be interesting to perhaps approach a non-traditional but important actor in education who would set an example for others.”

According to Rudolf Sivák, a professor at the university, the EUBA is the first university to adopt temporary compensatory measures based on ethnicity which are part of anti-discrimination legislation. He believes that after some time other schools will join the program, Sme reported.

The programme also introduces measures helping Roma once they are accepted to university such as assisting with requests for scholarships or accommodation.

The university, however, offers no special scholarship for Roma who can instead approach the Roma Education Fund (REF) which offers help to Roma students pursuing bachelor, masters or doctoral degrees at state-accredited universities in 16 European countries.

The average scholarship is €700 and around 80 Slovak Roma students applied for it this year. REF has been operating in Slovakia for nine years and awarded around €730,000 to Roma students, according to Sme.

The programme could fight the negative trend that many Roma who graduate from high school choose social work as their further field of study which is frequently taught at universities of low-quality.

Despite the fact that social work is an important field of study, young Roma students should study the same available fields as their non-Roma counterparts do, according to Lajčáková

It could also weaken the myth that most Roma are only able to do manual labour or be musicians. Such stereotypes effectively begin in early childhood, she said.

“We notice that even children who have good results at elementary school are, for example, persuaded by educational counsellors to study at private vocational schools in fields which provide few possibilities to apply on the labour market,” Lajčáková said.

“In the past I had a feeling that I could not match others,” Baláž said, “but during my study I found out that I can match others and I can be better than them in many things.”