AS PROMISED, the state passenger railway company Železničná Spoločnosť Slovensko (ZSSK) is launching new train lines as of mid-December. Behind the new lines is increased interest in passenger railway transport boosted by the extension of groups of citizens eligible for free rail transport, as well as efforts to continue to build a so-called clock-face schedule in Slovakia. 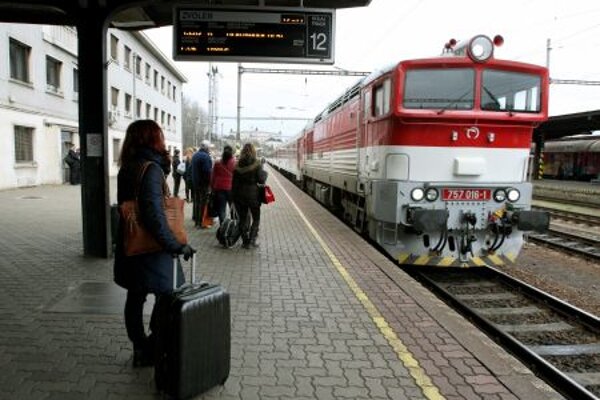 AS PROMISED, the state passenger railway company Železničná Spoločnosť Slovensko (ZSSK) is launching new train lines as of mid-December. Behind the new lines is increased interest in passenger railway transport boosted by the extension of groups of citizens eligible for free rail transport, as well as efforts to continue to build a so-called clock-face schedule in Slovakia.

“While during the first weeks after the launch of free transport we focused on increasing the capacity of trains by adding carriages, now transportation is really being densified by new lines,” Pavol Gábor, the head of ZSSK, said when introducing the new timetable. “The capacity will grow significantly.”

ZSSK is adding 26 long-distance lines and 79 regional lines across Slovakia as of December 14. It puts this increase in transport at about 5 percent.

But while Desana Mertinková, railway transport expert and the editor-in-chief of Železničná Doprava magazine devoted to rail transport, sees several positive features in the new rail timetable, she also points out that ZSSK is reducing commercial transport, i.e. train lines for which it does not receive any subsidies from the state.

“One should certainly praise the fact that the state has ordered more trains, because previous cabinets were only cutting them,” Mertinková told the Radio Regina. “But the real increase will be lower because ZSSK is simultaneously cancelling one quarter of commercial IC trains for which it does not receive subsidies.”

According to Mertinková, commercial IC trains have always generated a loss for ZSSK.

“It is also worthy of attention that the state company is cancelling its unsubsidised IC trains; however, it will start to operate new express trains on the same route from Bratislava to Žilina and from Trenčín to Košice, for which it will receive subsidies,” Mertinková wrote in the Sme daily, continuing that this means that ZSSK would move risky unsubsidised rail outputs into the risk-free scheme with subsidies.

ZSSK will operate all new lines as state-subsidised – i.e. as ordered by the state – and for which it receives subsidies of about €205 million per year. ZSSK estimates costs of the launch of new lines at about €11 million, while the reduction of paying passengers will mean a gap of about €12 million in revenues. The state has allocated €13 million for extended free transport in 2015, while it has admitted that this sum might be increased if needed.

ZSSK closed 2013 with a loss of €7.2 million and Gábor believes that in spite of costs related to the launch of free transport, the economic result of ZSSK this year will be better than in 2013.

As of November 17, children under the age of 15 and full-time students under the age of 26, people over 62 and all recipients of pensions are eligible for free travel using the national railways.

“For now we have three weeks’ experience with changes in the transport behaviour responding to free transport,” Jozef Schmidt from ZSSK said, as cited by the SITA newswire. “We believe that the interest in travelling by trains will gradually grow.”

It is estimated that as many as 2.5 million people in Slovakia (approximately half of the country’s population) are eligible, as opposed to the 900,000 who originally travelled for free. The specified groups of people are able to travel by train for free in second class carriages. The measure does not apply to inter-city (IC) and other commercial trains which carriers operate at their own expense without state support.

To travel for free, those eligible need to register with ZSSK, get a pass and pick up free tickets. Up to December 9, over 350,000 people, or about 15.5 percent of all the eligible registered for free transport, took advantage of the deal. Of this, pupils and students make up about 41 percent and pensioners 62 years and older account for 42 percent, based on ZSSK’s data.

ZSSK estimates that after the launch of the free rail transport measure, about 15-25 percent more people travel by trains, compared to the time before November 17. It estimates that these people have switched buses for trains. But while some lines, also with added carriages, are overcrowded during peak hours, some trains are still used under the average occupancy. Gábor of ZSSK estimated for the Pravda daily that trains are full at 25-30 percent on average. According to Mertinková, the Czech railway company České Dráhy reports usage at 25 percent, while the Swiss rail company reports 27.5 percent, and express trains of Deutsche Bahn 46 percent.

“But all these are only average numbers because trains during peak hours are overcrowded everywhere,” Mertinková told Pravda. “Nevertheless, transportation cannot operate in the way that a train is dispatched only when it is full.”

Bus companies, especially smaller ones, are reporting a dramatic decline in the number of passengers (especially students) and thus also revenues, sometimes even of 50 percent, the Hospodárske Noviny daily wrote. Contrary to regional bus carriers they do not have signed contracts with regional governments.

One co-owner of the small bus company GIM bus from Belža near Košice, Marek Sala, is preparing a strike of bus carriers.

“We may place our buses on rails in order for somebody to take notice of us, too,” Sala told Hospodárske Noviny.