AUTOMATIC teller machines (ATMs) are nothing new, but they too are being forced to change with the times. 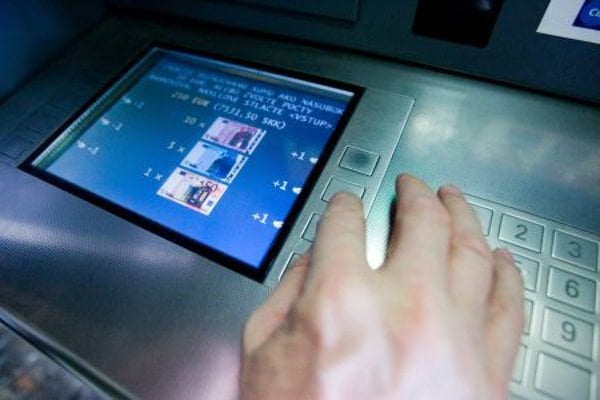 AUTOMATIC teller machines (ATMs) are nothing new, but they too are being forced to change with the times.

“Cash withdrawals by clients are and will continue to be in the future the primary task of ATMs,” VÚB bank spokeswoman Alena Walterová told The Slovak Spectator. “However, the ATM could become be a more complex tool for communication between bank and client in the future, including, for example, video consulting.”

Though London had its first ATM as early as 1967, the first bank card was issued in the former Czechoslovakia only in 1989, Roman Janota, the director of banking system division at the software company, Softec told The Slovak Spectator.

“Since this time, ATM machines have changed surprisingly little, especially in comparison with the dramatic development of computers or telephones,” Janota said.

Cash withdrawals still account for a significant portion of transactions, for instance 70 percent of ATM transactions at VÚB, but there have been some changes, including offering customers to choose the denominations of the notes they receive. ATMs can also provide information about the account balances of clients. Later, functions like the change of PIN codes, or charging pre-paid phone cards were added.

“Only recently possibilities like applying for travel insurance, consumer loans, a credit card or adding overdraft protection to the account have arrived,” Janota said. “One novelty is the usage of contactless cards and controlling the ATM by mobile phone application.”

When comparing ATMs and internet banking, two ways of using bank services while not actually visiting a bank office, the biggest difference is in the type of services that can be carried out, as well as the availability of necessary devices and technologies.

“The advantage of the ATM is that the client can withdraw cash,” ČSOB spokeswoman Zuzana Eliášová told The Slovak Spectator. “The advantage of internet banking is that clients can carry out financial transactions from the comfort of home.”

Slovenská Sporiteľňa spokesman Štefan Frimmer noted that ATMs are available to all clients holding a payment card, while clients do not need any additional devices like computers, smart phones or an internet connection.

“The disadvantage is that services provided by ATMs must be simpler and faster so that people can carry them out literally on the street,” Frimmer told The Slovak Spectator. Internet banking can provide more sophisticated services because it is conducted securely at home, using a full keyboard and offers the possibility of communicating beyond an online response.

Walterová of VÚB highlighted that internet banking is a much more complex instrument for the administration of clients’ finances.

“The advantage of an ATM is that people without access to the internet can also use it,” she said. “Another advantage is that the client can use the ATM of any bank, although generally only for the basic operation: cash withdrawal.”

Moreover, it is usually cheaper to carry out transactions via ATMs or online than to visit a bank, and they are not limited by opening hours, according to Walterová.

Banks plan to further develop and improve services provided by ATMs. Tatra Banka perceives the use of contactless forms as the latest trend. It was the first bank in Slovakia to provide the option for clients to withdraw cash from an ATM without a bank card, with only the use of a mobile phone. Via a mobile application, the client can generate a one-off code to confirm the ATM transaction, Tatra Banka spokewoman Marína Masárová told The Slovak Spectator.

“The primary task of an ATM is cash withdrawal and this will also stay,” Masárová said. “All the other functions are rather supplementary and these mostly can be replaced at other places, for example with internet banking or in a mobile app. Our philosophy is not to make ATMs a fully functional channel for daily banking needs, but rather to adapt their usage to current trends and these are undoubtedly services in mobile phones.”

The list of services currently available at ATMs, as well as banks’ efforts to offer more sophisticated services, indicate that the current form of ATMs is nearing its end, Janota said.
“ATMs will have to change in the future,” Janota said, pointing to the decreasing usage of cash. “Thus if ATMs were not to offer additional services, the numbers of their users will decrease, while the return on investments by banks on such a devices would decrease too.”

Janota sees several directions in which ATMs and their services can develop. They can provide further information, such as: offering discounts in shopping centres based on a client’s shopping habits, the provision of a personalised interface set by the client, the sale of tickets, issuing discount vouchers, financial transactions based on bar codes, charging mobile wallets and more.

“From the technological point of view, we can expect the introduction of touch displays, ATMs without keyboards and the usage of various sensors, including biometric ones,” said Janota. “Apart from technology, the extension of services will also depend on the possibility of the bank to effectively use a client’s data, their ability to cooperate with third subjects – for example merchants – and developing new products.”

According to Janota, Slovakia does not lag behind neighbouring countries in usage of ATMs. In terms of the number of citizens per ATM at 2,165 in 2012, Slovakia achieves the average. But when it comes to the usage of new technologies related to bank cards, for example contactless cards or payments by mobile phones with NFC technology, the country is among the world leaders.

“Slovakia is one of the first countries to start using mobile phones to manage ATMs,” said Janota. “We also already have two Bitcoin ATMs here.”