THE IMPACT of torrential rain, thunderstorms, lightning, hail, landslides and floods caused millions of euros in damage in Slovakia this year, and with signs that climate change is creating less predictable global weather patterns, flood insurance is an increasingly necessary investment for many homeowners and businesses. 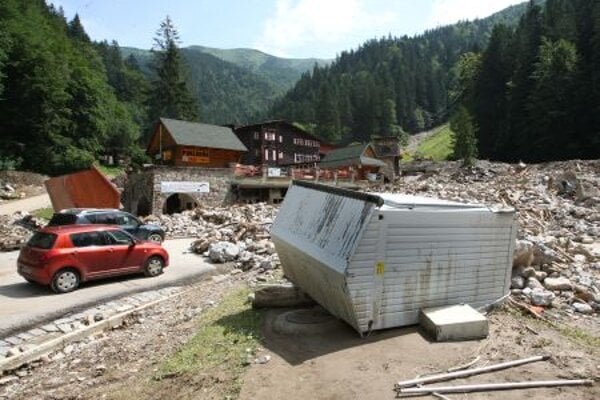 THE IMPACT of torrential rain, thunderstorms, lightning, hail, landslides and floods caused millions of euros in damage in Slovakia this year, and with signs that climate change is creating less predictable global weather patterns, flood insurance is an increasingly necessary investment for many homeowners and businesses.

“Clients reported to us for 9,600 insurance events caused by natural disasters this summer,” said Jozef Hrdý, director of insurance claims at Allianz–Slovenská Poisťovňa. “This is an increase of 35 percent compared with the previous year, which was also extremely damaging because of floods.”

Total damage exceeded €8.6 million with most claims coming from the Žilina, Sabinov, Stará Ľubovňa, Košice and the Bratislava districts. This includes the most serious single event on July 21: damage caused by torrential rain in the Vrátna Valley led to an avalanche of rocks, mud and wood that destroyed dozens of cars, the local cableway, and the road from Terchová village to the Vrátna Dolina.

Changing weather patterns are leading to greater interest in insurance policies, and some insurance companies have responded with new products.

“The interest of clients in insuring against natural risks persists; the weather regularly gives signals that this is a sensible move,” Allianz–Slovenská Poisťovňa spokesman Artur Šturmankin told The Slovak Spectator.

But while insurers take into consideration the probability of floods occurring according to location of the household, they do not use flood maps to segment clients from the viewpoint of flood risk.

ČSOB Slovakia monitors floods and other natural risks, but it has neither changed its insurance products nor insurance policies in recent years. They do take into consideration the location of real estate in terms of occurrence of floods over the last 10 years, according to ČSOB Slovakia spokeswoman Zuzana Eliášová.

Hydro-meteorologists expect an increased occurrence of extreme and variable weather in Slovakia, resulting in periods of flooding or dryness.

Among areas she considers to be most sensitive in terms of floods are areas with little permeable sediment and steep gradients (mountain areas). Thus the Carpathian arc, running from the Myjavská Pahorkatina mountains through Javorníky, Kysuce, Orava up to the Slanské Vrchy mountains of eastern Slovakia, is considered to be most at risk.

In terms of a potential change of the weather of Slovakia over last 10 to 20 years, Lešková said that this is too short a period to assess whether there are more or less floods. But according to her, it is necessary to count on the occurrence of flash floods with catastrophic impacts in the future. Based on data for the last 10 years, flash floods make up approximately 20 percent of all flood situations. But because of missing data from the past, it is not possible to say whether such a ratio represents an increase.

“We assume that each hydrometeorologic extreme will be overstepped,” Lešková said.

She recalled that floods always mean damage to both state and private property, and thus it is necessary to look for effective mitigation measures.

“When this is managed, then the increase in extreme situations may not mean an increase in damages,” said Lešková.

One such measure is to create flood risk maps, which Slovakia created on the basis of the EU Floods Directive by the deadline of the end of 2013. These maps should be later incorporated into master plans of municipalities and self-governing regions, Environment Ministry spokesman Maroš Stano told The Slovak Spectator.

The Slovak Water Management Enterprise (SVP) worked in cooperation with SHMÚ and the Water Research Institute to map flood risk at a scale of 1 : 50,000.

Maps of flood retreat indicate inundation areas along with river basins. Maps of flood risks provide data about potential risks in flooded territories, SVP spokesman Ľuboš Krno told The Slovak Spectator. Krno explains that this should include what could be flooded, such as houses, administrative buildings and so on and what the scope of damage might be in certain flood scenarios.

“Maps will serve state as well as self-governing bodies especially during land planning, permitting construction and so on,” said Krno, adding that the maps will be updated every six years.

Pavol Virág, director of SVP, told the Pravda daily that based on the maps, municipalities should change their master plans. Insurance companies welcome preparation of the flood risk maps.

“We are welcoming this initiative,” said Sturmankin of Allianz–Slovenská Poisťovňa.
At ČSOB they consider the use of flood maps and flood models to be an effective tool for risk management.

“Any initiative with respect to flood maps and models is beneficial,” said Eliášová of ČSOB. “As far as the final output offers a real possibility to assess flood risk, we would certainly consider incorporating it into our products.”

Likely future shifts in weather patterns indicate that such measures as flood risk maps will be increasingly necessary.